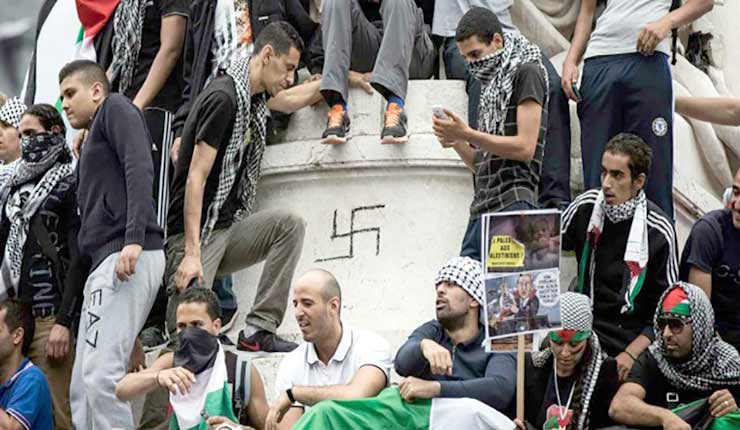 The German tabloid newspaper Bild has broadcast a controversial documentary on antisemitism among European Muslims after its airing was canceled by the French-German television station Arte — which originally commissioned the film.

The documentary was uploaded to Bild‘s website on Tuesday under the headline “Jew-Hatred: Bild Shows the Documentary Which Arte Won’t.”

Last week, Arte decided to cancel its showing of the film “Chosen and Excluded — The Hate for Jews in Europe,” claiming that the final version of the documentary did not conform to the remit agreed with its producers when it was commissioned.

In a letter to Josef Schuster — the president of the Central Council of Jews in Germany who protested against the decision to cancel the broadcast — Arte Program Director Alain Le Diberder insisted that the documentary had been canned for “honorable and good reasons.”

According to Le Diberder, the film’s overwhelming focus on the Middle East was so far removed from the original remit given to the producers that it had to be turned down.

However, Le Diberder emphasized that the rejection on these grounds should not be taken as an “assessment of the quality of the film or its thesis.”

Bild showcased a list of well-known German commentators praising the film, including Matthias Kuentzel, whose several books include a study of Germany’s relations with Iran, and Ahmad Mansour, a Middle East analyst who accused Arte of “having problems with reality.”

Matthias Becker — an antisemitism expert and a research associate at the Technical University of Berlin — told The Algemeiner the film was “a long overdue analysis of the relationship between antisemitism and criticism of Israel within the media.” Becker lauded the documentary for its “insights into the BDS movement and foreign funding for Palestinian NGOs with a clear anti-Israel agenda.”

Becker condemned Arte‘s decision to cancel the documentary as a “provocation.”

“The Jewish state, Israel, represents the main object, or target, of current antisemitic activities — not only in Europe,” he said.

Clemens Heni — the director of the Berlin International Center for the Study of Antisemitism (BICSA) and the author of several scholarly articles and books on contemporary antisemitism — was far less impressed with the film.

Criticizing the production as “poorly made,” Heni said that the producers had not included sections on antisemitism in the UK, Hungary, Scandinavia and other European locations as requested by Arte.

Heni added that the accompanying interviews with figures from the political Right meant “the viewer does not get a picture of Zionist criticism of today’s Israel, nor of mainstream German antisemitism.”