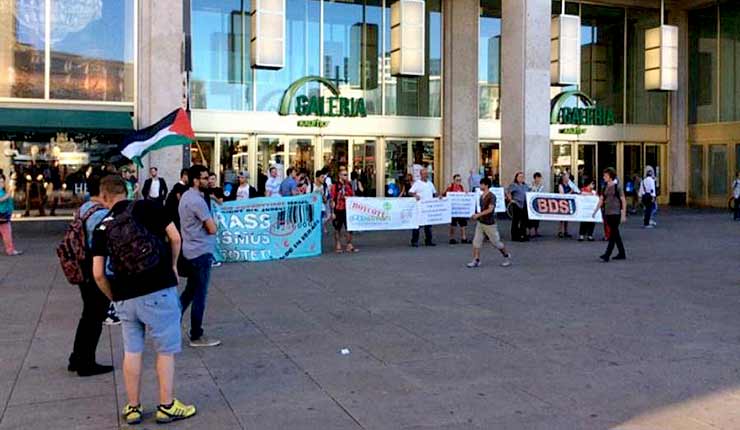 The SPD’s 17,500 member organization declared at their convention that “they oppose the antisemitic BDS campaign” and “condemn sharply widespread anti-Zionist antisemitism.”
The resolution said the SPD Berlin “stands in solidarity with Israel, and the recognition of Israel’s right to exist and self-defense are for us non-negotiable.”

The pro-Israel document was introduced by the youth organization of the SPD Berlin–Jusos–and stated they will “fight against every form of antisemitism.” The SPD members committed themselves to stop every form of cooperation with associations and supporters of the BDS campaign. The vote to support the anti-BDS resolution was unanimous.
“We call on SPD members to not participate in BDS campaigns or in events, exhibits and demonstrations that support BDS,” wrote the SPD Berlin. The social democrats added that in the future they will address BDS campaigns in different states and regions.

In early May,Reinhard Schramm, the head of the SPD-fraction in the town of Ilmenau in the state of Thuringia and head of the state’s Jewish community, wrote an opinion article that casted doubt on leading SPD politicians’ commitment to the security of the Jewish state. In his Thüringische Landeszeitung article, he wrote that a group of top SPD politicians, including SPD foreign minister Sigmar Gabriel, revealed “the one-sidedness of their criticism of Israel in the Middle East conflict.”

Schramm also cited the anti-Israel activities of  Ralf Stegner, a deputy party chairman, Andreas Nahles, the  federal minister of Labour and Social Affairs , and Jena Mayor Albrecht Schröter in his article. Stegner sought to stop German weapons deliveries to the Jewish state. In response to Stegner’s wish to diminish Israel’s self-defense system, Schramm said “if Israel were not armed it would cease to exist within months”  because of the terror states and entities in its neighborhood ranging from Hezbollah to Hamas to Iran and the Islamic State. Schramm said Stegner’s position is an “unforgivable mistake.”

In February, Stenger equated on his Twitter feed the Jewish Facebook COO Sheryl Sandberg with a neo-Nazi terrorist  for her attendance at a Trump administration hi-tech meeting.

Schramm criticized   the mayor of Jena in his home state, Schröter, for contributing to antisemtism. The mayor campaigns for a wide-ranging boycott of Israeli products.Schröter pledged, in 2012, his support to the German branch of the Catholic NGO Pax Christi’s anti-Israel campaign, to not buy Israeli goods. The anti-Israeli mayor said Israel was partially responsible for the Syrian refugee crisis in 2015.

In 2012,Nahles announced the SPD’s “strategic partnership” with the Palestinian Fatah party that seeks to advance–and deepen– “joint goals.”  During the same year, the headquarters of the SPD in Berlin showed a Breaking the Silence exhibit. The Israeli NGO Breaking the Silence uses anonymous sources to accuse Israel’s military of human rights violations.

Prime Minister  Benjamin Netanyahu pulled the plug on a meeting last month with Gabriel because the foreign minister met with Breaking the Silence. Gabriel has accused Israel of being an “apartheid regime” and belittled the Holocaust in an opinion article in April. Schramm wrote, “Israel’s policies make mistakes but an apartheid regime does not rule in Israel.” In response to Gabriel terming Palestinian Authority president Mahmound Abbas “my friend,” Schramm said Gabriel was silent about naming a friend among Israel’s democrats. Schramm asked if the common goal of the SPD and Fatah partnership included a “condemnation of Jew-hatred.”


Growing up north of Israel: How I became an ardent Zionist Girl found guilty of plot to blow up Jewish school in Copenhagen