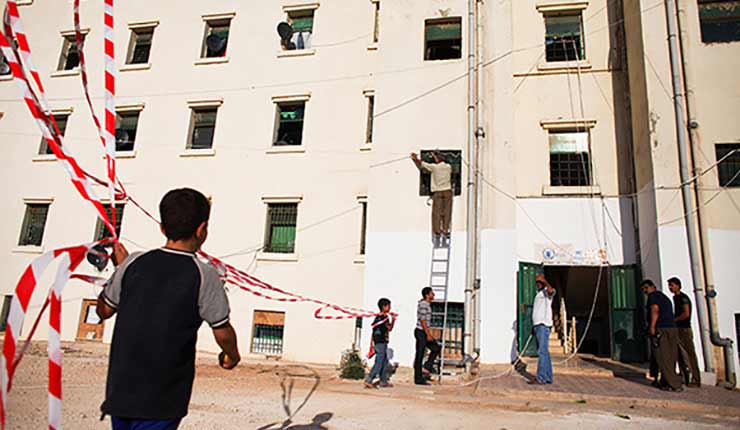 Palestinians living in refugee camps in the Arab world are facing ethnic cleansing, displacement, and death — but their leaders in the West Bank and Gaza Strip are too busy tearing each other to pieces to notice or even, apparently, care much.

Between the Palestinian Authority (PA) and Hamas, it looks as if they are competing for the worst leadership, not the best. Clearly, neither regime gives a damn about the plight of their people in the Arab world.

PA President Mahmoud Abbas, who is scheduled to visit Washington in the coming weeks for his first meeting with US President Donald Trump, spends most of his time abroad. There is hardly a country in the world that he has not visited since he assumed office in January 2005.

Hamas, for its part, is too occupied with hunting down Palestinians suspected of “collaboration” with Israel, and arming its members as massively as possible for war with Israel, to spend much time on the well-being of the two million people living under its thumb in the Gaza Strip. Hamas does have resources: its money is otherwise designated, however, to digging attack tunnels into Israel and smuggling weapons into the Gaza Strip.

The globetrotting Abbas, treated to red-carpet receptions wherever he shows up, has no time to attend to his miserable people in the Arab countries. Abbas devotes more than 90 percent of his speeches to denunciations of Israel, uttering barely a word about the atrocities committed against his people in Syria, Lebanon, Libya and Iraq. The 82-year-old PA president is, as always, fully preoccupied with political survival.

Abbas’s real enemies are his critics, such as estranged Fatah leader Mohammed Dahlan, and Hamas. Abbas is currently focused on undermining Dahlan and preventing Hamas from taking control of the West Bank. In the past few years, Abbas has also demonstrated an obsession with isolating and delegitimizing Israel in the international arena. For him, this mission is more sacred than saving the lives of Palestinians.

Notably, neither Abbas’s Palestinian Authority nor Hamas dares to criticize Arab countries for their mistreatment of Palestinians. In this, they are nothing if not savvy: critics in Arab states pay an extremely nasty price for forthrightness.

Consider for a moment the agenda of the recent Arab League summit in Jordan. This monumental meeting was conspicuously silent on the plight of Palestinians in Arab lands. The Arab heads of state and monarchs do not like to be reminded of how badly they treat Palestinians and subject them to discriminatory and apartheid laws. Beneath the public Arab support for the Palestinians rests a ruthless policy of oppression that is largely ignored by Palestinian leaders, the international community and mainstream Western media.

This apathy has turned Palestinians in the Arab countries into easy prey.

The Yarmouk refugee camp near Damascus, which once housed nearly one million Palestinians, stands almost empty after six years of Syria’s civil war. Most of the camp’s houses have been damaged or destroyed in the fighting between the Syrian army, Palestinian factions, ISIS terrorists and Syrian opposition groups. More than 3,400 Palestinians have been killed in Syria since the beginning of the civil war. Thousands of Palestinians are believed to be held in various Syrian government prisons. Another 80,000 have fled Syria to neighboring countries.

In nearby Lebanon, the conditions of Palestinians are no better. Palestinian refugee camps in Lebanon, home to nearly half a million people, were long ago turned into ghettos surrounded by the Lebanese security forces. In recent years, the camps have become battlefields for rival Palestinian gangs and other terrorists, many of whom are affiliated with al-Qaeda and ISIS.

The scenario of Nahr al-Bared is now repeating itself in another Palestinian refugee camp in Lebanon: Ain al-Hilweh. As in the previous instance, a terror leader, Belal Bader, has found shelter inside Ain al-Hilweh, home to more than 50,000 Palestinians. Like al-Absi, Bader is affiliated with radical Islamic groups such as al-Qaeda and ISIS. Bader’s presence in the camp has triggered a gang war with other Palestinian factions, resulting in heavy fighting between the warring gangs inside Ain al-Hilweh. In the past week, at least eight Palestinians have been killed and 40 wounded.

Residents of the camp now fear that they could meet the same fate as their fellow Palestinians in Nahr al-Bared.

The Lebanese army, however, has still not intervened to stop the bloodletting. For Lebanese security forces, Palestinian refugee camps in Lebanon remain “no-go zone.” All that is left for the Lebanese authorities to do, in the hope of preventing the violence from spilling outside the camps, is besiege the camps and impose restrictions on the movement of Palestinians.

The fears of the residents of Ain al-Hilweh are not unjustified. The Lebanese government is facing growing pressure to enter Palestinian camps and disarm the gangs that have been operating there over the course of many years.

By and large, in recent years, the Palestinians who used to live in Syria, Iraq and Libya have left these countries as a result of the civil wars, and oppression by the governments and various militias. It is not comfortable or safe to be a Palestinian in an Arab country. Scenes of lawlessness and anarchy inside Palestinian refugee camps in the West Bank have also driven many residents to move to nearby cities and villages. Most refugees in the West Bank no longer live inside UNRWA-run camps.

Let us end where we began: with the Palestinian (non)leadership. What has it done to help its people in the Arab countries? Nothing. No Palestinian leader will urge an emergency session of the UN Security Council to expose the ethnic cleansing and killing of Palestinians in Arab countries. No Palestinian leader will demand that the international media and human rights organizations investigate the atrocities perpetrated by Arabs on their Palestinian brethren. We are sure to see more such criminal silence when Abbas meets with the president of the United States.