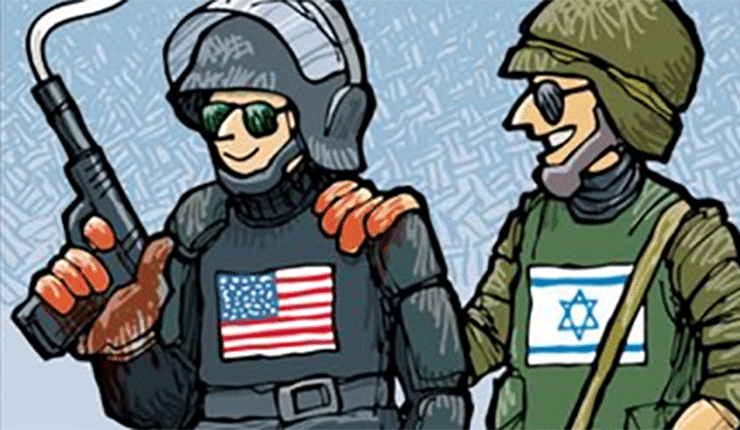 In July 2016 I documented a growing tactic in the anti-Israel movement, to blame Israel for domestic U.S. police shootings of blacks, such as Michael Brown in Ferguson.

The tactic, meant to exploit preexisting racial tension and stoke anti-Semitism to turn people against Israel, had been many years in the making, as I wrote in Exposed: Years-long effort to blame Israel for U.S. police shootings of blacks:

… there has been a multi-year effort by left-wing and Islamist anti-Israel, anti-Zionist, and openly anti-Semitic activists to hijack racial tensions in the United States and redirect that anger towards Israel.

That effort has been on overdrive since the shooting of Michael Brown in Ferguson and is accomplished through a combination of false and misleading statements regarding the militarization of domestic U.S. police departments and U.S. police training in Israel.

The intellectual rubric is “intersectionality,” by which anti-Israel activists try to forge links with minority (particularly black) activists by holding out Israel as the key link to oppression around the globe….

It is preposterous to blame Israeli counter-terrorism training for the militarization of U.S. police, much less how a specific police officer acted in a particular situation. Only a miniscule and almost unmeasurable percentage of U.S. police are trained in Israel.

There are several hundred police training academies in the U.S. training tens of thousands of police in the U.S., compared to a few hundred (at most) police who participate in Israeli counter-terrorism training. That Israeli training is focused on counter-terrorism, and usually involves police chiefs who visit Israel for a week of combined seminars and tourism…

So the likelihood is somewhere close to zero that any cop who is involved in a shooting (much less an unjustified shooting) was trained in Israel and the Israeli training contributed to the shooting….

this movement to blame Israel for minority deaths in the U.S. is not about Israeli training of police. There is no connection. Whatsoever.

Rather, it’s an attempt to exploit racial tensions unrelated to Israel and to stoke hate particularly in the black community.

There is zero evidence that Israel anti-terrorism training of police chiefs has had any connection to any police shootings of blacks in the U.S., much less the high profile shootings that gave rise to the Black Lives Matters movement.

This is just one example of how the claim has been spread through social media in the Sterling and other shootings.

The lack of factual basis for blaming Israel for U.S. police shootings also has not stopped anti-Israel groups who operate on campuses, like the misleadingly named “Jewish Voice for Peace,” from claiming Israel is responsible. Indeed, JVP issued a Passover Haggadah supplement for “ending U.S.-Israel police exchanges,” as Prof. Miriam Elman documented:

It features prominently as a supplement to JVP’s Haggadah (titled “Leaving Mitzrayim,” or in English, Leaving Egypt).

This latest project plans to target the “exchange programs” between American police forces and Israel’s military and security experts.

According to JVP’s deputy director Stephanie Fox, the exchanges enable the IDF to share its “worst practices” like “torture, surveillance and spying which is all brought to bear against Palestinians.” Having completed the training sessions, back home U.S. law enforcement officials adopt these practices to use against American “people of color”.

The problem is that there’s not a shred of evidence for any of this.

The reality, as noted by Prof. Mark Levine (a harsh critic of Israel), is that the history of militarized policing in the U.S. is complex and multifaceted—and has nothing to do with Israel.

We are now seeing the fruit of this tactic on campuses.

In late April, the Associated Students of Madison (ASM), the University of Wisconsin – Madison student government, passed a wide-ranging divestment resolution which was not to include mention of Israel. In the type of deceptive move that we’ve seen at other campuses, at the last minute an anti-Israel component was added. The Algemeiner reported:

Anti-Israel activists at the University of Wisconsin-Madison (UW) have been accused of having “cleverly manipulated” the Jewish community in order to successfully pass Boycott, Divestment and Sanctions (BDS) legislation in an unanimous vote on Wednesday night.

Ariela Rivkin — the only Jewish voting member of Associated Students of Madison (ASM), the body that voted 22-0, with two abstentions, to adopt the pro-BDS resolution — told The Algemeiner on Thursday that BDS proponents “definitely orchestrated this to trick” pro-Israel students, by not broadcasting before the meeting that divesting from Israel was to be part of the agenda.

Instead, Rivkin said, the official agenda released 24 hours before the vote described the motion as, in general, about fossil fuels, prison labor, border walls and arms manufacturers….

[The] ASM meeting … took place during Passover, at which the BDS issue was unexpectedly raised again. The decision to discuss the matter at a time when many Jews were absent caused four student representatives to walk out of that meeting in disgust.

One anti-Israel provision caught my eye, because it wasn’t the usual divestment language. Rather, it specifically blamed police exchanges for the killing of blacks in the U.S.:

WHEREAS, Israeli police and military train US police departments and Immigration and Customs Enforcement agents in military police control tactics in response to civilian protests. These tactics have actively contributed to the militarization of police forces and the subsequent extrajudicial killings of Black and Brown bodies at the hands of these police forces,

This allegation is a lie, as described above. Additionally, almost all of the controversial police shootings have taken place in the context of an unexpected interaction between police and an individual, not as part of “crowd control.”

There are exchange programs in which a small number of senior American police officials travel to Israel, but they go to learn about counter-terrorism, not community policing or crowd control. Unfortunately, instead of considering facts and logic, ASM chose to repeat a baseless conspiracy theory designed to demonize and dehumanize Israelis.

Yet this conspiracy theory became part of an official resolution of UW-Madison student government.

The University administration immediately condemned the resolution, without mentioning the false allegation of Israeli involvement in killing American blacks. The statement read in pertinent part:

The Associated Students of Madison’s Student Council is independent of the university administration. It does not control UW–Madison policies or practices and its actions tonight will not result in a change in our approach, or that of the WFAA, which is driven by its obligation to maximize the impact of a donor’s gift on the intended program in the university.

We are concerned that the actions taken tonight appear to violate a ruling of the Student Judiciary; Jewish members of student government, who raised this issue with the Student Judiciary, walked out of the meeting after expressing concerns that the process was undemocratic and not transparent.

Immediately after the Chancellor issued that statement the student government demanded she step down.

What happened at UW-Madison is just a modern form of the blood libel, blaming Jews for deaths to which they have no connection and seeking to impose collective guilt.

When groups like Jewish Voice for Peace tell you that the anti-Israel boycott movement is about the “occupation,” don’t believe them. There would be no reason to spread the blood libel that Israel is responsible for U.S. police shootings of blacks if the “occupation” were at issue.

Rather, what we are seeing on campuses is the exploitation of racial tension and stoking of anti-Semitism as a tactic to build anti-Israel coalitions.