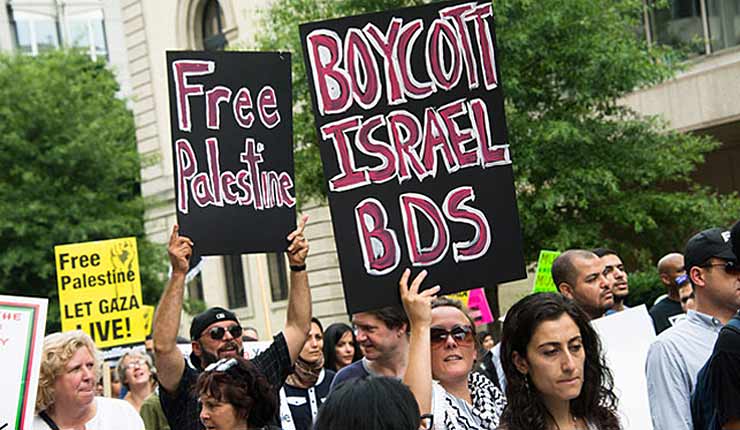 Governor Greg Abbott signed House Bill 89, known as the “anti-BDS” legislation, into law, in a ceremony held at the Austin Jewish Community Center on Tuesday morning. Signing this bill marked the first piece of legislation Abbott signed to become law during the state’s 85th Legislature.

“Any anti-Israel policy is an anti-Texas policy,” said Abbott before signing the toughest anti-boycott, divestment, and sanctions (BDS) law in the nation. “Texas is not going to do business with any country that boycotts Israel.”

The Texas anti-BDS law stands firmly against the discriminatory BDS movement that uses false, distorted, and anti-Semitic rhetoric to demonize Israel and its citizens to isolate the Jewish state. H.B. 89 mandates companies that contract with Texas government entities to verify they do not and will not boycott Israel, also barring state pension and endowment funds like the Teacher Retirement System, the Employees Retirement System of Texas, the University of Texas Investment Management Company, and the permanent school fund from investing with companies that boycott Israel.

“People in Israel are just like Texans,” said Abbott who spoke on the “cultural connection between the people of Texas and the people of Israel” before signing the bill into law, calling that connection “very deep and very genuine.”

Abbott thanked House and Senate leadership noting, “I have never seen a bill so many people came together to get behind.”

Unlike many of the state’s bills this legislative session, Representative Phil King’s (R-Weatherford) H.B. 89 sailed through both chambers of the legislature with its final passage last week when the House unanimously passed the bill, 131-to-0. In March, the Texas Senate members voted 24-to-5 in favor of Senator Brandon Creighton’s (R-Conroe) companion S.B. 29.  Abbott signed a merged version of the two bills.

King and Creighton flanked Abbott at the bill signing with their respective House and Senate co-authors on stage. King called this law the “strongest that any state has passed” and “a model for other states to follow.” Creighton added, “We stand with Israel today, tomorrow, and everyday.” He also thanked Lt. Governor Dan Patrick, who he said helped lead on this effort in the state senate. Both lawmakers thanked their co-authors.

Abbott added this bill is “to show the rest of the nation and the world, Texas is a friend to Israel,” announcing one of the signing pens will be delivered to Israeli Prime Minister Benjamin Netanyahu.

Israel is Texas’ fourth leading trade partner with numerous joint projects in agricultural research and development, science and technology and industrial research. In 2015, Texas exported $498 million of product to Israel and, in 2012, had $118 million in military contracts. Nearly 300 companies in the state do business with Israel. Texas also holds more than $50 million in high-rated State of Israel Bonds.

After the Legislature passed the H.B. 89, many Jewish and Christian leaders praised the Texas Legislature, including Josh Block, CEO and President of the Israel Project. He toldThe Jerusalem Post: “I want to thank the government of Texas for seeing the true, hateful intentions of BDS and banning such state-sponsored bias.”

He added, “The people of the Lone Star State and Israel share an unbreakable bond based upon mutual values, and by passing this legislation — ensuring that taxpayer dollars to not fund discrimination — Texas has reaffirmed this important friendship.”

Texas is the 18th state to pass an anti-BDS law. Today marks the 69th birthday, Yom Ha’atzmaut, for the nation of Israel.


Donald Trump : "I will always stand with the jewish people and with our great friend and partner Israël" Police officer set on fire with petrol bomb during riots in Paris