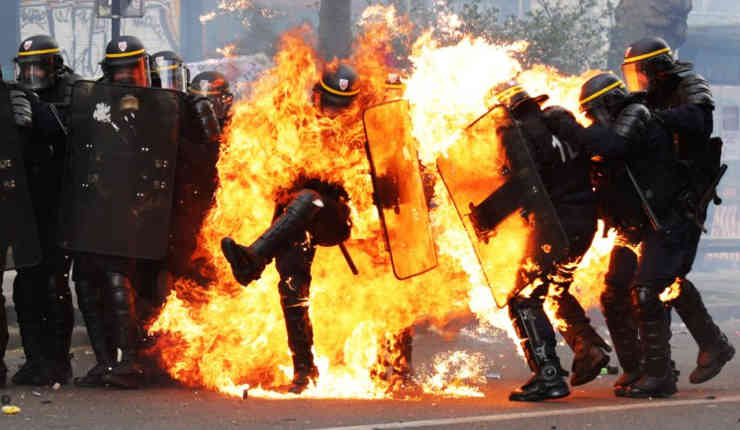 Six officers were injured during riots in protest against far right Marine Le Pen’s success in the first round of the French presidential election.

One officer, believed to be the man pictured above, was seriously hurt by a firebomb which exploded on the top of his helmet.

The violence broke out during May Day protests close to the Place de la Bastille, where demonstrators shouted ‘Fascists out!’

A police source said: ‘Around one hundred hooded protestors got as close as they could to police lines, and then one or two threw Molotov Cocktails.

‘One officer suffered serious burns to the face just after 3pm. He was rushed to hospital. He is in a bad way, but his condition is not life threatening.’

Another officer suffered serious hand wounds, while others were less badly hurt.

MORE: In pictures: Here’s how May Day looked around the UK

There were five arrests in all.

Ms Le Pen, leader of the far-Right National Front until she temporarily stood down for the election, will go head-to-head against independent favourite Emmanuel Macron on Sunday.

‘She represents racism and hatred, that’s why we’re opposing her,’ said one Left-wing activist, who asked to be referred to as Nicole, 22.

‘Thousands of us have come out on the street to stand up for justice and decency, and to show our shame at these fascists hoping to take over.’

More than 9,000 police, gendarmes and soldiers were on duty to try and prevent trouble on what is traditionally a day of protest across France.