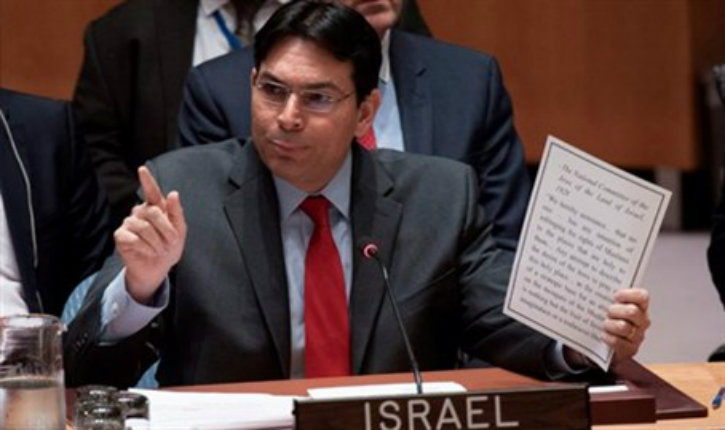 “Barghouti is a terrorist and a murderer,” Ambassador Danon said in a statement on Tuesday.  “His actions glorify death and bloodshed [and] are no different than those of ISIS which seeks to spread its hateful ideology throughout the world using terror.”

Last week, as reported by The Algemeiner, Danon told the Security Council that the exaltation of terrorists like Barghouti “not only distances us from peace, but dishonors the memories of the innocent victims.”

The 57-year-old Barghouti — the head of Fatah’s Tanzim armed wing and a founder of the al-Aqsa Martyrs’ Brigades — orchestrated a string of deadly terrorist attacks during the Second Intifada before being arrested in Ramallah by Israeli troops in April 2002. He was convicted on murder charges by an Israeli court in May 2004 and sentenced to life in prison.

Barghouti is currently reported to be entering the second week of a hunger strike in protest against what he described as the “collective punishment against the Palestinian prisoners.”

In the letter sent to Security Council members — a copy of which has been obtained by The Algemeiner — Barghouti did not claim he was innocent of the crimes he was convicted of, but wrote nonetheless, “I was sentenced to 5 life sentences and 40 years by the occupying Power’s courts for terrorism in what was denounced unanimously by international observers as a political show trial.”

Barghouti also compared himself to the late South African President Nelson Mandela, asserting that the life sentence imposed on Mandela in the 1960s “did not delegitimize him or his struggle; it only further delegitimized the Apartheid regime prosecuting him.”

The Barghouti letter came on the heels of the controversy over the New York Times‘ decision to publish an op-ed by him which initially failed to mention why he was in prison. The Times later amended Barghouti’s brief biography line to note his conviction on “five counts of murder and membership in a terrorist organization.”

According to the Palestinian Prisoners Club, a Barghouti support group, his health has declined “seriously” as a result of one week without food, but there has been no independent confirmation of this claim.


Far-Left Austrian President: All Women Must Wear Headscarves to Fight Islamophobia Trump may announce us embassy move to jerusalem during Israel visit