NETANYAHU SETS POLICY: WE WON’T MEET DIPLOMATS WHO MEET WITH BREAKING THE SILENCE 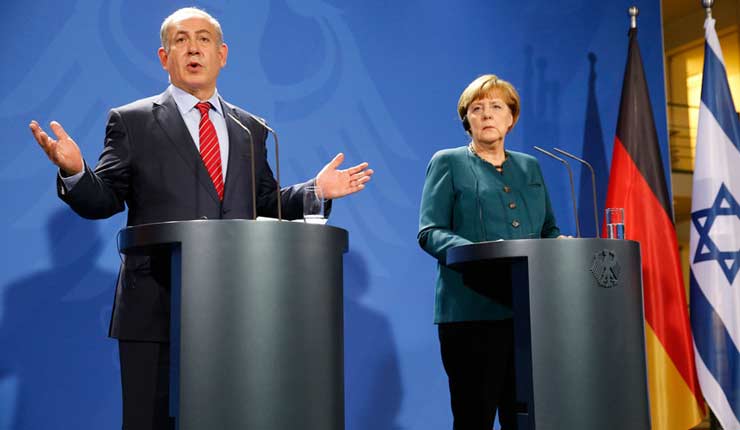 Israeli-German relations took a turn for the worse on Tuesday, the day after Holocaust Remembrance Day, when Prime Minister Benjamin Netanyahu canceled a meeting with visiting German Foreign Minister Sigmar Gabriel because he insisted on meeting with far-Left NGO Breaking the Silence.

“Our relations with Germany are strong and they are important and they will continue,” Netanyahu said, explaining his decision to cancel the meeting with a senior representative of one of Israel’s most important friends in Europe.

“My policy is clear: not to meet with diplomats who visit Israel and meet with organizations that defame IDF soldiers and try to prosecute our soldiers as war criminals, which diplomats would never consider doing in the United States, Britain or anywhere else,” he said. “Our soldiers are the basis of our existence. They are guarding us, and we will protect them.”

Netanyahu defended the policy, which recalls Jerusalem’s decision a decade ago not to meet foreign leaders in Israel if during their visit they met with Hamas representatives.

The prime minister said that he has led Israel’s foreign relations to “unprecedented prosperity” and that his is a “proud and assertive national policy, not out of weakness and with a bowed head.”

Gabriel, who diplomatic sources in Jerusalem said was warned before his arrival on Monday that a decision to meet the group would lead to a cancellation of his meeting with Netanyahu, said Netanyahu’s move was “not nice” and caught him by surprise, since he generally has an open relationship with the premier.

Sources in the Prime Minister’s Office said that, after the meeting was canceled, Gabriel, who is also Germany’s vice chancellor, refused to take a phone call from Netanyahu.

Gabriel’s meeting with Breaking the Silence and another left-wing NGO – B’Tselem – was scheduled to take place late in the evening, away from the press. Representatives from both organizations said they would not issue any statements on the matter.

“I regret this a great deal, but I must say openly that we cannot become a political football for Israeli domestic politics,” Gabriel told journalists.

“There will be other opportunities to meet elsewhere. We are not talking about a catastrophe.”

Gabriel said that, while this incident will “not change anything in our relationship, it is regrettable.”

While Gabriel did not meet with Netanyahu, he did meet earlier in the day with a number of other senior Israeli officials, including opposition head Isaac Herzog – who later slammed Netanyahu for his decision and said it was harming Israel’s interests – and with President Reuven Rivlin.

In welcoming Gabriel, Rivlin said, “Israel and Germany never had a simple relationship, and we never will.”

Gabriel, in his remarks, said, “We are committed to the friendship, partnership and special relationship with Israel, and nothing will change that.”

Reactions to Netanyahu’s decision were split largely along party lines, with coalition officials praising the prime minister, saying that it is important for him to take a stand on this issue, and opposition leaders slamming him for needlessly complicating ties with one of Israel’s most important friends.

She said that for the last two years Israel has waged a difficult campaign with many countries in Europe “which fund anti-Israel organizations.”

She termed Breaking the Silence the “flagship” of these types of groups, since its mostly anonymous testimony by soldiers of alleged wrongdoing by their comrades has been used by international organizations and even Hamas to slam Israel. She said the group’s goal is to bring IDF soldiers to the International Criminal Court in the Hague. According to the organization NGO Monitor, Breaking the Silence has received NIS 5.5 million over the past four years from Germany via direct public funding or through Christian aid organizations.

Deputy Minister for Diplomacy Michael Oren asked how Germany would react if foreign leaders went there and met with German organizations that portray German soldiers in Afghanistan as war criminals.

“I think it is unbecoming and inappropriate [for] leaders of democratic nations, particularly democratic allied nations, to come into our country and meet with organizations that openly oppose the policies of the democratically elected government of Israel – that is an undermining of Israeli sovereignty and democracy,” he said.

Asked whether he is concerned about the diplomatic ramifications this would have on Israel’s ties with a very important ally, Oren replied: “I think that at the end of the day the Germans will respect us more. If we don’t draw redlines, people don’t respect us.”

Oren asserted that “people respect you when you stand up for yourself” and that “we had a situation here that was anomalous, and not in accord with normal behavior between states, certainly not between allied democratic states.”

Herzog said that Gabriel is “no small player” in Europe who will surely be Germany’s foreign minister following the next elections, and that he has been someone who has helped Israel in the past. He also said Netanyahu significantly raised the profiles of Breaking the Silence and B’Tselem in Germany and Europe with this move.

“To boycott him and humiliate him, when we will need him tomorrow in the EU, is a grave mistake,” he said.

Meretz leader Zehava Gal-on said that Netanyahu’s move reveals a politician who “is willing to sacrifice Israel’s foreign relations for his own populist political interests.

“We saw this before in the relationship with [former US president Barack] Obama, and now Netanyahu is going to go sacrifice our relations with Germany? And then he is really surprised by the results of the votes in the UN,” she said.

Lahav Harkov and Eliyahu Kamisher contributed to this report.