UN secretary-general: Denial of Israel’s right to exist is ‘modern form of anti-Semitism’ 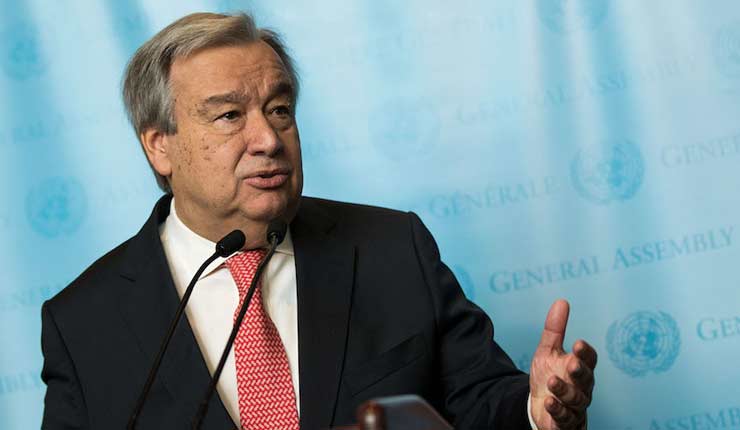 In a speech Sunday night at the World Jewish Congress’ Plenary Assembly in New York, Guterres said he could not control all expressions of bias against Israel at the United Nations. But he said Israel has the right to be treated like any other U.N. member state.

“A modern form of anti-Semitism is the denial of the right of the State of Israel to exist,” Guterres said. “As secretary-general of the United Nations I can say that the state of Israel needs to be treated as any other state, with exactly the same rules.”

Israeli and United States officials, along with supporters of Israel, have long accused the U.N. of irredeemable bias against Israel. According to U.N. Watch, a pro-Israel group that monitors the international body, the U.N. General Assembly condemned Israel 20 times in 2016, compared to six condemnations for the rest of the world combined.

But Guterres emphasized that treating Israel fairly does not mean agreeing with all of its government’s decisions. He also advocated the establishment of a Palestinian state.

“That does not mean I will always be in agreement with all the decisions made by any government position taken by any government that sits in Israel,” he said regarding his commitment to treat Israel fairly, but added that he supports “the absolutely undeniable right of Israel to exist and to live in peace and security with its neighbors.”

The secretary-general, speaking ahead of Holocaust Remembrance Day, called the Holocaust “the most heinous crime in the history of mankind” and promised to marshal the U.N. to eliminate anti-Semitism.

“You can be absolutely sure, as secretary-general of the United Nations, I will be in the front line of the struggle against anti-Semitism, and to make sure the United Nations is able to to take all possible actions for anti-Semitism to be condemned, and if possible, eradicated from the face of the earth,” he said.

Speaking the same day right-wing populist Marine Le Pen advanced to the second stage of France’s presidential election, Guterres decried rising anti-Semitism in the U.S. and Europe, which he said was fueled by populism.

“We see today anti-Semitism alive and well,” he said. “We see it in acts of physical aggression, murders of Jewish people in different parts of the world, destruction of property, destruction of monuments, destruction of centers. And very unfortunately we have seen the multiplication of forms of populism, of xenophobia, of hatred.”