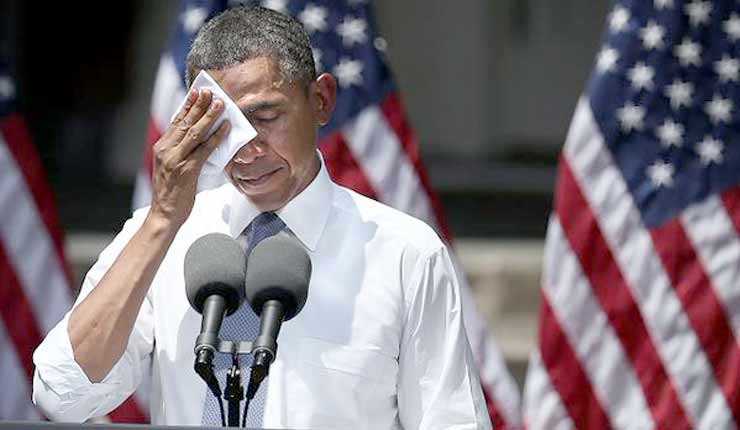 Press Secretary Sean Spicer issued a statement Tuesday on the chemical attack in Syria, condemning the “heinous actions” of Bashar al-Assad against innocent people and placing blame on the former Obama Administration for “weakness and irresolution.”

Spicer read the statement to reporters in an off-camera White House briefing:

“Today’s chemical attack in Syria against innocent people, including women and children, is reprehensible and cannot be ignored by the civilized world. These heinous actions by the Bashar al-Assad regime are a consequence of the past administration’s weakness and irresolution. President Obama said in 2012 that he would establish a “red line” against the use of chemical weapons and then did nothing. The United States stands with our allies across the globe to condemn this intolerable act.”

The attack on northern Idlib province, Syria has so far killed 100 and injured 400, according to a Syrian relief organization cited by the Associated Press. Another report put the death toll at 57. An initial attack appears to have been followed with airstrikes on hospitals treating those injured by the first round of the attack. Humanitarian workers on the ground have reported that the wounds of those being treated and the bodies found lifeless later on suggest the bombs made use of sarin gas, a chemical weapon prohibited by international law. Both Syria and Russia have denied responsibility for the attacks.

Asked about the Administration’s position on Syria in light of comments from the Secretary of State and the U.S. Ambassador to the United Nations, Spicer said, “I think we had opportunities in the past several years to look at regime change. I think those are fundamentally–the landscape is fundamentally different than it is today.”

In 2013, an attack in the Ghouta region left nearly 1,500 dead, more than 400 of which were children, and the U.S. attributed it to chemical weapons. The attack crossed the “red line” set by then-President Barack Obama, who had pledged to take action if the Syrian government used chemical weapons. Following the strike, the Obama administration accepted Assad’s claim that Syria had relinquished its chemical weapons arsenal, according to NPR.

“There is not a fundamental option of regime change as there has been in the past,” he told reporters, offering instead, “What we need to do is fundamentally do what we can to empower the people of Syria to find a different way.”

Asked about the timing of the attack, Spicer replied, “I think the idea that someone would use chemical weapons on their own people, including women and children, is not something that any civilized nation should sit back and accept or tolerate and I think that is what we’re making very clear today.”

Asked about any potential for Russian involvement, Spicer referred the reporter to the statement, which does not mention Russia, and his confidence in it. He reiterated that the President was briefed on the situation in Syria “extensively this morning by his national security team.”

“We did have alternatives to regime change and they weren’t taken,” Spicer said in response to a question regarding Obama’s “red line.”