Palestinians: We Have the Right to Poison the Minds of our Children 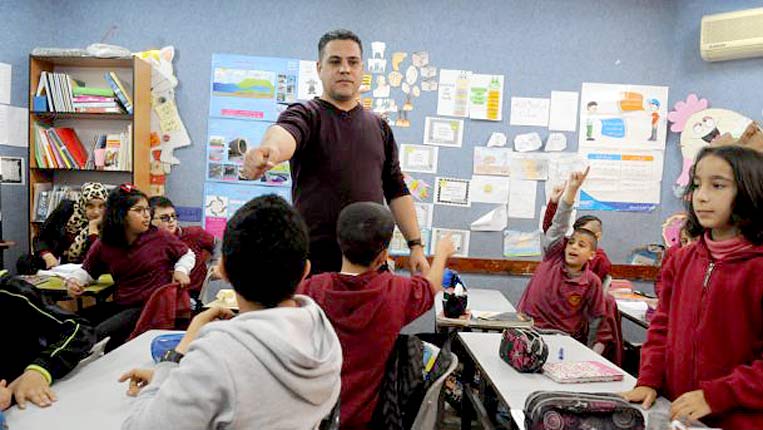 In an ironic turnaround, the United Nations Relief and Works Agency for Palestinian Refugees (UNRWA) is now the object of intimidation and threats made by many Palestinians.

UNRWA is reportedly planning to introduce some changes to the curriculum in its schools in the West Bank and Gaza Strip, and the Palestinians are rather unhappy about it. They claim that UNRWA has “succumbed” to Israeli pressure to make the changes.

The proposed changes are based on leaks to Palestinians and have not been confirmed by UNRWA. Palestinians claim that they learned about the plans to introduce the changes during meetings with senior UNRWA officials.

According to the Palestinians, the changes are intended to “eradicate” their “national identity” and “history” and distort their “struggle” against Israel.

In one fourth-grade textbook, the Palestinians charge, UNRWA has replaced the map of Palestine with a picture of a traditional Palestinian woman’s dress.

The new textbooks make no reference to cities in Israel; they mention only cities in the West Bank and Gaza Strip, such as Nablus, Jenin, Gaza City, Jericho and Ramallah.

Unsurprisingly, an UNRWA revision of the Palestinian presumption of Jerusalem as the “capital of the State of Palestine” to Jerusalem as a “Holy city for the Abrahamic religions” did not go over well with Palestinians. In addition, they are angry because the UNRWA textbooks make no mention of the Jordan Valley along the border between Israel and Jordan.

The controversial textbooks have also removed photos of Israeli soldiers patrolling near schools and references to Palestinian prisoners held in Israel for terrorism. Moreover, the new textbooks are missing the previous references to “Palestinian Prisoners’ Day” — an annual event marked by Palestinians in solidarity with imprisoned terrorists.

Palestinians are also protesting the removal of words such as “occupation” and “checkpoints” from the new textbooks.

If true, the proposed changes to the Palestinian textbooks should be welcomed as a positive development towards ending anti-Israel incitement in Palestinian schools, including those belonging to UNRWA. In light of the widespread Palestinian protests and threats, however, it is doubtful whether UNRWA will succeed in making the proposed revisions.

A recent study into schoolbooks used by UNRWA-run schools found that the texts consistently delegitimize and demonize Israel. The schools do not teach Palestinian children to recognize Israel. The research was conducted by Dr. Arnon Gross, who translated the books, and Dr. Roni Shaked, both from the Harry Truman Research Institute at the Hebrew University in Jerusalem.

In these currently-used books, Zionism is defined as a colonialist movement that was founded by European Jews in order to gather Jews from all around the world and bring them to Palestine. No mention is made of the religious or historical connection of Jews to the Land of Israel or to Jerusalem. Instead, the UNRWA textbooks teach that Jewish holy sites such as the Western Wall, Rachel’s Tomb and the Cave of the Patriarchs are Muslim holy sites.

Not surprisingly, vicious rivals though they are, Hamas and the Palestinian Authority have joined forces to thwart UNRWA’s planned changes to the textbooks. This is an issue that these two corrupt regimes can agree on: inciting children against Israel and denying its existence.

Ahmed Bahr, a senior Hamas official in the Gaza Strip, warned that any changes to the curriculum would “harm the history and national rights of the Palestinian people, as well as their resistance” against Israel. By “resistance,” the Hamas official means terrorism against Israel, including suicide bombings and the launching of rockets at Israel.

According to the Hamas official, UNRWA and the international community need to understand that “the option of resistance is the only and shortest way for restoring Palestine and liberating our land.”

In other words, Bahr wants to go on teaching Palestinian children to continue perpetrating terror attacks, in order to destroy Israel and replace it with an Islamic empire. In fact, Hamas has long been teaching precisely this in its own schools in the Gaza Strip. Yet Hamas is making it manifest that UNRWA is to follow suit in its schools. Children studying in the UN agency’s schools are to continue learning that Israel is nothing more than a figment of the imagination.

The past few days have seen Palestinians in the Gaza Strip staging a series of protests against UNRWA. They warned the agency against making the changes, which are designed to “distort the minds of Palestinian children” and which “do not comply with the culture of Palestinian society.”

Hamas has refused to allow UNRWA to teach about the Holocaust in its schools. From Hamas’s point of view, the UN agency seeks to “poison the minds of our children by taking steps that only serve” Israel. “UNRWA is trying to justify Israeli crimes against the Palestinians by teaching the so-called Holocaust in the context of human rights in UNRWA-run schools,” Hamas said. This attitude is far from surprising: Holocaust denial has always been an integral part of Palestinian and Arab narratives.

It is easy to see why Hamas and other extremist Palestinian groups would be opposed to changing textbooks that delegitimize and demonize Israel. More difficult to understand is that the Palestinian Authority, whose president, Mahmoud Abbas, says he is opposed to anti-Israel incitement, also came out against UNRWA’s planned changes.

A statement issued by the Palestinian Ministry of Education in Ramallah warned that it would take “punitive measures” against anyone who tries to change or tamper with the curriculum. “Any attempt to change the Palestinian curriculum will be considered an assault on Palestine and an eradication and dilution of our national identity,” the ministry cautioned.

In his meeting with U.S. President Donald Trump in Washington in mid-April, Abbas is expected to renew his commitment to combating anti-Israel incitement, according to senior PA officials in Ramallah. One wonders how Abbas plans to account for the PA’s threats against UNRWA regarding the textbooks.

The PA, like Hamas, plans to continue indoctrinating their children through poisonous textbooks that depict Jews as evil occupiers and land-thieves who build “racist walls” and demolish houses for no reason. They also wish to continue teaching children that the conflict with Israel is not over a two-state solution, but the “liberation of Palestine, from the river to the sea,” which means the annihilation of Israel. The goal is for the students to believe that Israel is one big “settlement” that has no place in the Middle East.

Moreover, along with Hamas, Abbas and his PA plan to continue inculcating Palestinian children with the idea that they should look to terrorists who kill Jews as their role models. It might be illuminating if the conversation between Trump and Abbas were to be informed by these uncomfortable facts.

Bassam Tawil is an Arab scholar based in the Middle East.