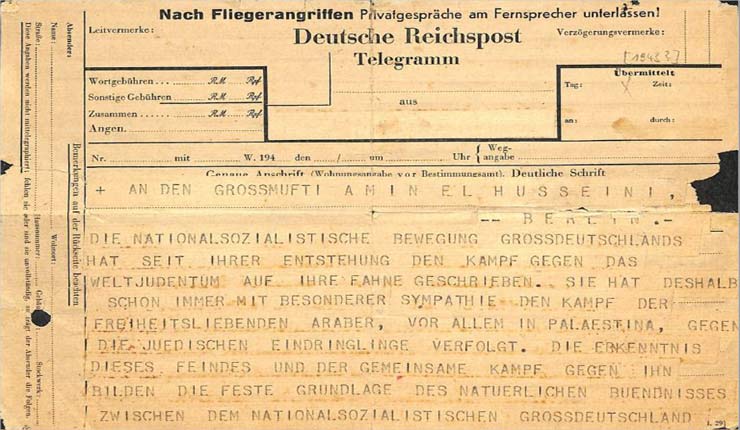 A telegram from Heinrich Himmler to the Grand Mufti of Jerusalem has been found in the archives of Israel’s National Library.

Believed to have been sent in 1943, it contains a promise by Hitler’s deputy to Haj Amin al-Husseini that the German Reich will stand behind the Arabs of Palestine and support their struggle against “Jewish intruders.”

Published on the library website on Wednesday, the telegraph notes that the struggle against world Jewry has been a principle of the German National Socialists from the start, and that the regime has always followed “with particular sympathy,” the struggle of “freedom-loving Arabs,” especially those in Palestine battling the Jews.

“The joint recognition of the enemy and the struggle together against it are what build the solid basis between the National Socialists of Greater Germany and freedom-loving Muslims of the world,” Himmler wrote.

The telegram concludes with the SS chief sending the Mufti his warm greetings on the “unhappy” anniversary of the Balfour Declaration and best wishes for the continuation of the struggle.

The Balfour Declaration, signed on November 2, 1917, by the UK’s then foreign secretary, Arthur James Balfour, announced the British government’s intention to facilitate “a national home for the Jewish people” in the Land of Israel.

It was seen as giving the Zionist movement official recognition and backing on the part of a major power, on the eve of the British conquest of the then-Ottoman territory of Palestine. A telegram from senior Nazi Heinrich Himmler to the Grand Mufti of Jerusalem, Haj Amin al-Husseini, probably dating to 1943, found in the archives of the National Library, March 29, 2017.

Husseini fled Palestine in 1937 after the issue of a British warrant for his arrest for involvement in the Arab revolt, which began the year before.

He fled to Iraq via Lebanon, where he linked up with a pro-Nazi group behind a short-lived military coup against the pro-British regime in Baghdad in 1941, then fled again, eventually reaching Berlin later that year.

In Berlin, he had a 90-minute meeting with Hitler, presenting himself as the representative of all Arabs and all Muslims. When they met, both men still believed that Germany was going to win the war and their discussions focused on how the Arabs could play a role in a German victory.

The mufti sought Nazi support for Arab independence from colonial powers and wanted to have the British and the French thrown out of the Middle East. He also wanted the Nazis to promise that they would not send any Jews to Palestine.

“The mufti failed to achieve most of his goals,” Esther Webman, senior research fellow at the Dayan Center for Middle Eastern and African Studies at Tel Aviv University, said. “Nazi Germany did not declare its support for the idea of Arab independence and the Nazi leadership exploited it in order to achieve its own goals. ”

“Furthermore, his efforts to agitate the Arabs of the Middle East against their colonial rulers during WWll did not succeed. His one significant achievement was his success, in a number of cases, in preventing Jews from going to Palestine during the war.”