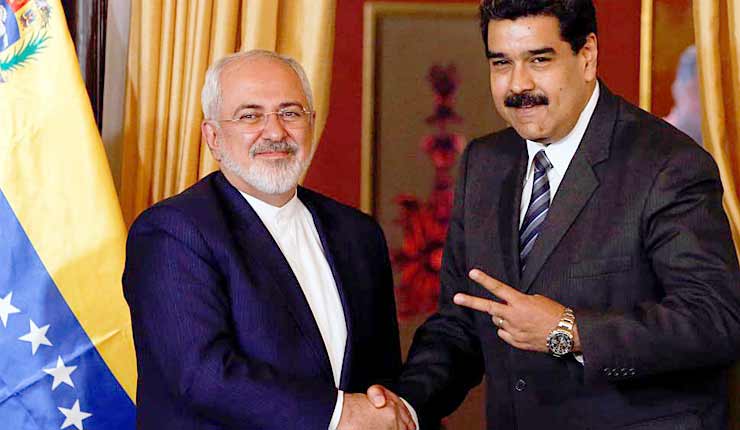 A new book written by Emilio Blasco, Washington correspondent for the newspaper, ABC Spain, confirms many points about Iran’s penetration into the Western Hemisphere. The book is written is Spanish but its title in English would be translated as “Boomerang Chavez”.

Among other things Blasco points out the existence of fraud in the elections via electronic manipulation. Likewise, the author also stresses the fact that 95% of the Colombian drugs bound for Europe and the U.S. depart from Venezuela. Blasco also confirms the point that I raised in my book “Latin America in the Post Chavez Era”, which has been brought first by the scholar Max Mainwaring (and most recently by Ari Chaplin), that drug trafficking is a form of asymmetric war against Washington. Diosdado Cabello, currently the President of the National Assembly along with the current Venezuelan president, Nicolas Maduro, directed these drug operations.

Cabello has worked in close cooperation with Hugo Carvajal, a top military officer, former director of military intelligence whose extradition to the U.S. from Aruba, was recently denied by the Dutch government. Likewise, Tareck Al Assami, a former Venezuelan Minister of Interior and current governor of the State of Aragua, was part of this nefarious drug operation.

More worrisome is the information the author obtained from Rafael Isea, a former deputy minister of Finance and president of the Bank of Economic and Social Development. According to Mr. Isea, it was Maduro, then Venezuela’s foreign minister, who travelled to Damascus in 2007 to meet with Hezbollah leader, Hassan Nasrallah, in order to negotiate the installation of Hezbollah cells in Venezuela. This agreement protected Hezbollah’s drug trafficking and money laundering activities as well as their arms supplies and provision of passports. These passports and visas were prepared by Ghazi Nassereddine, a counselor in the Venezuelan embassy in Syria (he was born in Lebanon and became a Venezuelan citizen), and later was blacklisted by the FBI.

Isea attended the Maduro/Nasrallah meeting. That was the year when mysterious direct flights between Caracas and Teheran were first noticed. Isea affirms that more than 300 Hezbollah members, among them about a dozen listed terrorists were included on those flights.

Their role, according to the former Venezuelan high officer, was to participate in drug trafficking and money-laundering in order to secure funding for Hezbollah.

Besides Hezbollah’s “financial” activities, it is clear that Hezbollah’s very presence in Latin America is, in itself, a security problem. Let us remember that a Hezbollah member stationed in Guyana went to New York in 2007 to carry out a terrorist attack at the the JFK airport. By the same token, it is reported that U.S. agencies also discovered attempts by Hezbollah to establish contacts with Mexican drug cartels to gain access to the border with the U.S. This, of course, is confirmed by the assassination attempt against the Saudi Ambassador in October 2011 carried out by Iran with the help of the “Zetas”, a notoriously violent Mexican drug cartel.

Likewise, it has been reported that the sophisticated tunnels built on the U.S./Mexican border have been built exactly in the image of the tunnels built by Hezbollah on the Israeli/Lebanese border. These actions can place the U.S. at the mercy of terrorist attacks not just by Hezbollah but by any other terrorist group that establishes an alliance with Iran. After all, an alliance between the Islamic State and Iran is not impossible as they are both Islamists and may well find common ground. Iran does not pursue just a Shiite domination. Iran and Al Qaeda have reportedly cooperated. Except for Israel, Iran could make an alliance with any other entity that can promote its agenda.

However, the events of the last month have shown that the facts mentioned above remain largely ignored.

The Obama Administration is, on the one hand, trying to show that a nuclear deal with Iran will lead to a more civilized U.S. friendly Iran while failing to recognize and deal with the issues of Iran’s non-nuclear terrorist and seditious activities.

The Administration’s idea is to separate the nuclear issue and Iran’s terrorist activities. In other words, it is a “judicial” approach in what is supposed to be a highly relevant national security issue that requires a real political solution. This is precisely what many criticize on both sides of the aisle in the U.S. Congress as well as the Israeli Prime Minister, Benjamin Netanyahu. Since Iran’s subversive and anti-American behavior is not an issue in the nuclear negotiations, this could be interpreted by Iran as a green light to continue such behavior.

With regard to Venezuela, as we already pointed out elsewhere (http://www.theamericasreport.com/2015/04/22/an-evaluation-of-the-summit-of-the-americas/), the Obama Administration’s approach is to seek conciliation with a continent that still holds the U.S. accountable for what they consider to be past historical damage. The Obama Administration acknowledged these past faults and declared that the age of ‘impunity for American interference in the region is over”. The Administration went as far as to tell President Maduro that Venezuela is not really a threat, as the White House executive order issued last March indicated.

Is the United States falling into a trap between the need to secure a nuclear deal with Iran and its own aspiration to be accepted by a handful of Latin American leaders whose contempt for the U.S. is part of its identity and ideology regardless of U.S. behavior?

Such policy could be highly problematic not just for the specific case of Iran and Venezuela. It also makes it difficult for the long -term credibility of the United States and its world leverage.

At the very least, the United States government should take Iran’s behavior in the Middle East, Asia, and Latin America into account while negotiating with Iran. The separation between Iran’s behavior and Iran’s nuclear program is fictitious and risky. Likewise, it is foolhardy for the U.S. to compromise with Venezuela while its drug trafficking activities, support of terrorism, and certainly Cuban-inspired oppression continue.


Linda Sarsour is only the symptom of a much bigger illness Mideast Analysts: In Trump Era, Iranian Regime Feeling ‘Besieged and Under an Emerging Existential Threat’