Three children not enough, have five: Erdoğan to Turks in EU 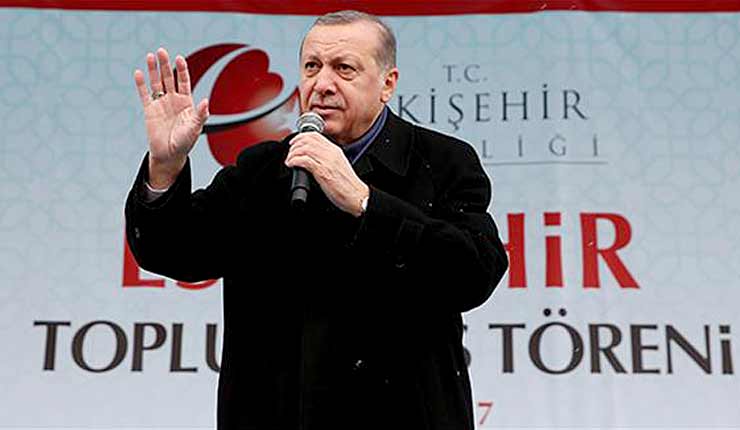 President Recep Tayyip Erdoğan has called on Turkish citizens living in Europe to have five children – two more than his usual calls to Turks in the homeland – in a bid to multiply their presence in the continent so that they will be the “future of Europe.”

“I am calling out to my citizens, by brothers and sisters in Europe,” Erdoğan said at a rally in the Central Anatolian province of Eskişehir on March 17. “Have not just three but five children.”

“The place in which you are living and working is now your homeland and new motherland. Stake a claim to it. Open more businesses, enroll your children in better schools, make your family live in better neighborhoods, drive the best cars, live in the most beautiful houses,” he said. “That’s because you are the future of Europe. It will be the best answer to the vulgarism, antagonism, and injustice made against you.”

Erdoğan’s message comes amid ongoing political tension after Turkish ministers’ attempts to stage rallies with members of the Turkish community living in Europe were denied by some countries and after the European Court of Justice ruled to allow employers to ban workers from wearing visible religious symbols, including the headscarf.

Slamming the decision known as the “headscarf ban,” Erdoğan said: “They are banning the headscarf. We are fed up. Where is the freedom of religion, freedom of conscience? Ban the kippa if you can. Can they [ban the kippa]?”

He also claimed that the real reason behind the rising antagonism toward Turks in Europe was “the discomfort they feel as Turkey has become an independent country with its economy and situation in the world.”

“The Turkey they dream is a dependent country which they can order around,” he said. “They have no discomfort with the Turk who is a worker in the factory, but they cannot bear any Turk who becomes an owner, engineer or manager of this factory.”

Erdoğan also criticized the main opposition Republican People’s Party (CHP) for decrying the constitutional amendment that will usher in an executive presidency, accusing it of making false and unsubstantiated comments.

“What about the Dutch within us?” he said, referring to the leader of the CHP, Kemal Kılıçdaroğlu.

“Along with the terrorist organizations, they are trying to smear the constitutional amendment by pointing out the things that are not actually in the amendment,” he said.

“They are insulting our youth, our parliament and our local governors. Not only that, they are trying to make the Syrian immigrants a target for our people,” he said, criticizing Kılıçdaroğlu’s earlier comments that stated that the government’s policy on immigration was turning Turkish citizens into “second-class citizens.”

Slamming the CHP, Erdoğan said the new constitutional amendments would divest the CHP of a say in the parliament.

“In the old system, with 25 percent votes, by coalitions or tutelages, the CHP could have a say in the administration. In the new system, it will be impossible to have an influence on the administration without gaining 51 percent of the votes of the public,” he said.

“We will not see any candidate from the CHP become a president. Our children will not see it either,” he said.

Erdoğan also took aim at the head of the Union of Turkey’s Bar Association, Metin Feyzioğlu, for conducting campaigning abroad against the constitutional charter.

Emphasizing that Feyzioğlu was a legal professional, Erdoğan accused Feyzioğlu of acting along with “terrorists that escaped to Europe.”

“Somebody from here went there [to Europe] – the head of the Union of Turkey’s Bar Associations. He is supposedly a legal professional. Even he has the professor title. And he conducts hall meetings along with the terrorists who went Europe by escaping from Turkey. What kind of a man of law are you?” he said.