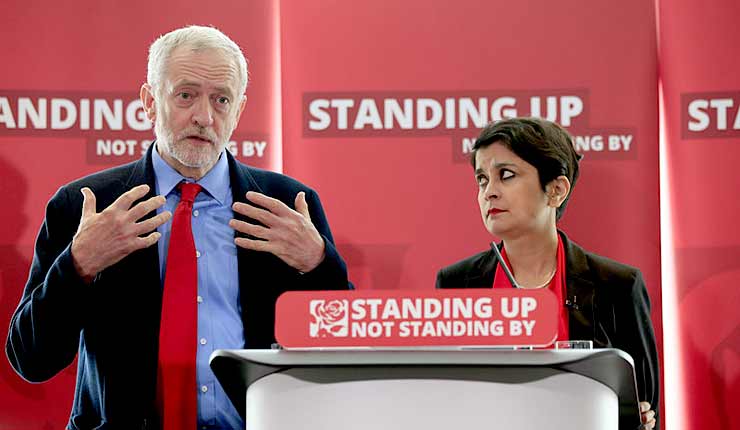 These political and historical developments are real, but their existence lowered down ropes into the pitch-dark pit into which Western societies once cast older forms of antisemitism, enabling them to haul themselves to the surface once more.

The Labour Party under Jeremy Corbyn’s leadership is a case in point: antisemitism within it has been denied and has now gone unpunished for so long that it is possible to see the very worst forms of it appearing from the darkness, blinking into the light.

So it is that in the last few months we have seen numerous cases of notorious conspiracy myths about the Rothschild family of bankers and philanthropists appearing in the ranks of the Labour Party.

There is a wide antisemitic mythology about the Rothschilds controlling the financial systems of the world, starting wars for their own advantage, or even sinking the Titanic for their own ends; these are mostly linked to wider conspiracies — as espoused by the likes of David Icke — in claiming secret Jewish control of the world.

One key myth about the Rothschild family is that Nathan Rothschild had used his money to return to London from the battlefield at Waterloo ahead of official news of an English victory, turning his advance information into a fortune by manipulating stocks. Brian Cathcart authored a book on the subject of the battle news, and expertly dissects the Rothschild conspiracy myth in an article in The Independent.

The antisemitic ‘Satan’ pamphlet spreading the lie was published in 1846 and other Rothschild myths date back to the mid 18th Century: this, then, is old antisemitism, borne of an age pre-dating any modern socialist movements, including the Labour Party. Latterly, it was the Nazi Party who embraced it, for example in 1940 releasing a film: The Rothschilds’ Shares in Waterloo.

So it is with something of a sense of despair that we now observe myths favoured by the Nazis appearing frequently in the ranks of a Party that once claimed to be a bastion of anti-racism. Last month, Councillor John Clarke resigned after making such claims. Clarke has form when it comes to posting from Nazi and other far-right sites. In itself, that is regrettable, but that he is an ex-academic Labour politician who actively believes the Rothschild conspiracy myths is disturbing in the extreme.

Note that, significantly, he says “I will now block people who accuse me of antisemitism merely to close down legitimate criticism of Israel &/or Rothschild family”, claiming parity between Jewish attempts to ‘cover up’ the ‘evil’ of Israel and a plot to conceal banking conspiracies.

More incidents have now been reported to us from sources inside Labour. For example, the enthusiastic pro-Corbyn Facebook group: “Jeremy Corbyn’s Labour Party Forum” recently saw the posting of a Rothschild conspiracy blog from a ‘left-wing socialist website’ that is so antisemitic it includes blood-libel-associated pieces such as “Jewish Human Organ Trade in Turkey stealing Syrian Children”.

The posted article itself is entitled “The Complete History of the ‘House of Rothschild’” and begins: “The Rothschilds have been in control of the world for a very long time, their tentacles reaching into many aspects of our daily lives…” and which refers to “The Secret History of Jewish World Domination”. The person posting the article asks: “Is it OK to post here?” The answer was affirmative. Andy Ross, an administrator for the group says: “It’s OK, I think it’s about time people’s eyes were opened”. Another forum member and Corbyn enthusiast, Les Tasker responds: “They are the biggest parasites on the planet”. Another observes: “The author is a regular poster on here”.

Another member of the forum is John Bryant. He posted a picture of a number of politicians, including the Mayor of London, Sadiq Khan and Chukka Umanna, saying: “These people are just Rothschild puppets”. The post was allowed to remain on the page. It was first posted on 27th February and at the time of writing, it has not been removed by administrators.

John Bryant and Andy Ross, friends on Facebook, are not just members of the forum, but are its administrators: in fact John Bryant is its creator and chief administrator. They are also both Labour Party members and ‘Corbynistas’, constantly reiterating their support for legitimate ‘social justice’ causes and their ardour for Labour’s leader.

In Facebook groups supporting Jeremy Corbyn and the Labour Party, such sentiments abound. For example, Paul Cook, an enthusiastic member of “Jeremy Corbyn will be Prime Minister” and “We support Jeremy Corbyn for PM” posts that “Zionist Rothschild Israel is an evil regime” and posts a piece asking “Is Judaism a Satanic Cult?”. Yet his posts and his membership of these groups is not moderated. Reports of such extreme postings are received daily by Campaign Against Antisemitism.

Campaign Against Antisemitism has previously highlighted Rothschild-based antisemitism by Labour figures, for example Councillors Andrew Slack and Ilyas Aziz, as well as from Jeremy Corbyn’s brother Piers. Ilyas Aziz, despite this and more besides, has been re-admitted to the Labour party without discipline. Andrew Slack was suspended, but Labour has declined to comment on his discipline.

All this in a month when a Labour councillor performed a Nazi salute in a council chamber.

When inviting Labour Party members to join “Jeremy Corbyn’s Labour Party” Facebook group, John Bryant himself says: “Everyone should feel free to join this group and find out the values of the Labour Party under Jeremy Corbyn”. These words send shivers down one’s spine, for the Labour left under Jeremy Corbyn has now reached an immoral low where antisemites within the Party are openly promulgating ideas favoured by the Nazi party, while waving the banners of ‘progressive’ social virtue.

Campaign Against Antisemitism must now warn that the Labour Party and its leadership is currently presiding over a tolerance of conspiracy myths amongst its politicians and membership that pose a real threat to the Jewish community in terms that are wholly outside any debate related to Israel.

Professor Cathcart asks why it has taken 200 years for the Rothschild antisemitic charge to be dismissed. He is mistaken: not in his historical analysis, but that the myth is dead, because it still lives on within the Labour Party in 2017.