Europe: “The Era of Liberal Babble” 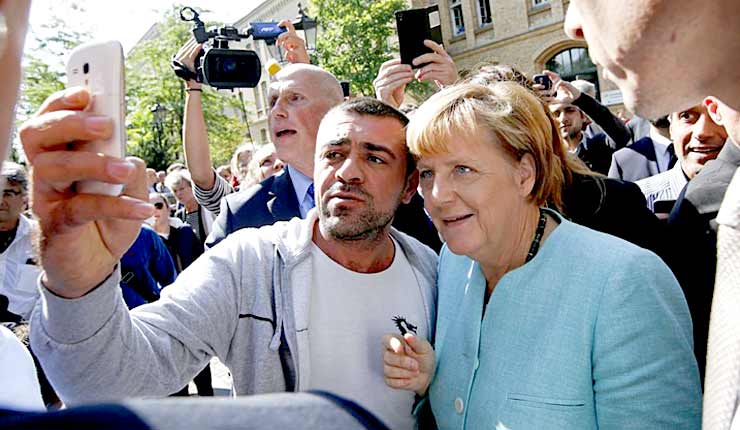 Europe, so many years after the Cold War, is ideologically divided into a new East and a West. This time, the schism is over multiculturalism. What Hungarian Prime Minister Viktor Orbán has termed “liberal babble” continues to govern Western Europe’s response to the challenges that migration and Islamic terrorism have brought, especially to personal security.

The Western European establishment considers arming oneself against terrorists, rapists and other ill-wishers outlandish, even in the face of the inability of Europe’s security establishments to prevent mass terrorist atrocities, such as those that took place in Paris at the Bataclan Theater or the July14 truck-ramming in Nice.

The European Union’s reaction to terror has been to make Europe’s already restrictive gun laws even more restrictive. The problem is that this restrictiveness contradicts the EU’s own reports: these show that homicides committed in Europe are mainly committed with illegal firearms.

In Eastern Europe, on the other hand, it is still normal to want to defend yourself. Last summer, Czech President Milos Zeman even encouraged citizens to arm themselves against Islamic terrorism. “I really think that citizens should arm themselves against terrorists. And I honestly admit that I changed my mind, because previously I was against [citizens] having too many weapons. After these attacks, I don’t think so”.

Since the president’s remarks, the Czech Interior Minister, Milan Chovanec, has proposed extending the use of arms in the event of a terrorist attack. He explained that despite strict security measures, it is not always possible for the police to guarantee a fast and effective intervention. Fast action from a member of the public could prevent the loss of many lives.

Such reasoning, often seen as laughable in Western Europe, reflects an understanding of the fear that has become a recurring theme on the continent. In Germany, a recent poll showed that two out of three Germans are afraid of becoming the victim of a terrorist attack and 10% perceive an “acute threat” to their safety. Among women, the figures were even higher. 74% responded that they sometimes feel unsafe in crowded places, and 9% said they felt permanently threatened and scared.

Western European leaders, on the other hand, pretend not to understand this fear. In 2015, German Chancellor Angela Merkel was asked how Europe could be protected against Islamization. Merkel, who does not move without her own personal security team consisting of 15-20 armed bodyguards around her, working in shifts, answered: “Fear is not a good adviser. It is better that we should have the courage once again to deal more strongly with our own Christian roots.” In December, she told members of the Christian Democratic Union (CDU), who were asking how to reassure the public about integrating migrants, “This could also broaden your horizons.” (This is the same Merkel, who in 2010 said that multiculturalism had “utterly failed”).

As Western Europeans are discovering, however, that the state is increasingly unable to protect them, they have begun acting on their fears:

In France, a survey showed an increase of almost 40% in gun license requests since 2011. “Before the beginning of 2015, it was only a vague trend. Since the ‘Charlie Hebdo‘, Bataclan and Nice attacks, [gun license requests] have become a growing phenomenon”, wrote Le Nouvel Observateur.

In Belgium, requests for gun license applications soared in one major province, Liège, doubling in just five years. “The explanation may lie in the current security context, which generates feelings of insecurity among the population”, said officials from Liège’s Arms Service, the state body in charge of granting gun licenses in the province.

In the wake of mass sexual attacks by migrants in Cologne, major German cities all reported an increase of requests for weapons permits. Cologne police estimated that they received at least 304 applications within just two weeks of the mass sexual assaults. In 2015, the city’s police force saw only 408 applications total over the entire year.

Switzerland has also seen a drastic rise in gun permit applications, with all 12 cantons reporting an increase from 2015. Interim 2016 figures show a further escalation. “There’s no official explanation for the rise, but in general we see a connection to Europe’s terrorist attacks,” said Hanspeter Kruesi, a police spokesman in the Swiss canton of St. Gallen.

Gun sellers in Austria also said that interest in weapons grew after a large number of refugees arrived. “Fear is very much a driving force,” said Robert Siegert, a gun maker and the weapons trade spokesman at the Austrian Chamber of Commerce.

Uninhibited by the obvious alarm of their citizens, the EU nevertheless carries on its immigration policies. “I believe Europeans should understand that we need migration for our economies and for our welfare systems, with the current demographic trend we have to be sustainable,” said Federica Mogherini, the EU’s high representative for foreign affairs and security policy. She added that the continent “does not and will not close its doors” to migrants.

Mogherini is probably not interested in a recent Chatham House study, in which an average of 55% of the people across the 10 European countries surveyed wanted to stop all future immigration from mainly Muslim countries. Only two of the countries surveyed were from Eastern Europe. A ban was supported by 71% of people in Poland, 65% in Austria, 53% in Germany and 51% in Italy. In the UK, 47% supported a ban.

Several countries in Eastern Europe, such as Poland, Hungary and Slovakia, have refused to take in more migrants, and several Balkan countries have completely closed their borders.

Czech President Milos Zeman has openly stated, “The experience of Western European countries which have ghettos and excluded localities shows that the integration of the Muslim community is practically impossible”.

Slovak Prime Minister Robert Fico has dismissed multiculturalism as a “fiction”. He has also refused to accept EU-agreed quotas on relocating migrants saying, “It may look strange but sorry … Islam has no place in Slovakia.” He added that the problem is not migrants coming in but “rather in them changing the face of the country.”

Western Europe has predictably responded with accusations of “Islamophobia” and “fanning hatred towards minorities and refugees”. One EU state, Luxembourg, even suggested expelling Hungary from the EU for its refusal to toe the EU line and, according to Luxembourg, for treating asylum seekers, “worse than wild animals”. Hungary’s prime minister, Viktor Orbán, in turn, harbors little respect for the way that his Western European colleagues have shaped politics: “We are experiencing now the end of an era: a conceptual-ideological era,” Orbán told supporters in 2015, “Putting pretension aside, we can simply call this the era of liberal babble. This era is now at an end.”