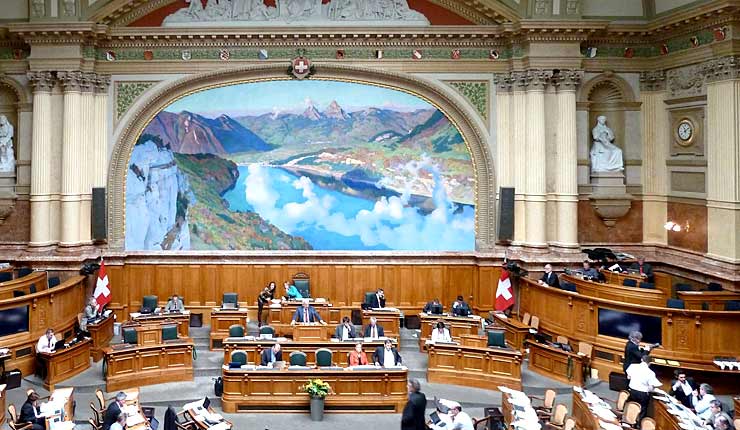 Share
Tweet
In an unprecedented decision, Switzerland’s parliament moves to prohibit funding of the Boycott, Divestment and Sanctions movement, grouping it alongside racist and anti-Semitic organizations; decision marks the first time any European parliament acknowledges moral equivalence or correlation between anti-Semitism and BDS.

Switzerland’s parliament made an unprecedented decision on Wednesday to prevent the state from “financing any organization which supports racism, anti-Semitism, or the BDS.”

The BDS, for the first time in any European parliament, was lumped in by the Swiss parliamentarians next to racism and anti-Semitism. The decision was passed with 111 votes for it and 78 against, while 4 abstained.

Foreign Affairs Minister Didier Burkhalter tried to convince the parliament to reject the proposal, claiming that “it is Switzerland’s right to encourage public discussion in Israel,” referring to the country’s support of body’s linked, directly or otherwise, to the BDS, and presenting the organization Breaking the Silence as an example.

Burkhalter claimed that Breaking the Silence is “a thorn in the eye of the Israeli government, because it reports the horrors of the occupation.”

This notion however, has been criticized as a fraudulent cyclical phenomenon, whereby Switzerland funds Breaking the Silence to report “horrors”, which the minister is then “made aware of.”

Despite Burkhalter’s protests, the Swiss parliament was not convinced.

Affecting the change was injected with an added impetus due to the work by representatives of the NGO Monitor organization, which promotes accountability from non-governmental organizations and government funders.

They presented the MPs with facts about organizations that Switzerland is funding, showing that they promote anti-Semitism and even denounce acknowledgement of Israel and the Jews’ right to reside in the state’s territories.

These information, picked up on and covered by Swiss media, titled the cales, causing many Parliament members to be swayed, even members of Burkhalter own party.

For the parliament’s decision to take effect, it needs to be approved by the senate, though senior diplomatic sources believe that the chance for that is high.

Deputy Minister of Foreign Affairs Tzipi Hotovely responded to the decision, saying “I congratulate the Swiss parliament for this important step towards justice and human morals. This decision deserves to be adapted in other parliaments across Europe. We are all in favor of human rights, but there are organizations that serve a different purpose under the guise of this notion, and it’s crucial to make efforts to uncover their true goals.”

NGO Monitor has been active in recent years in several European parliaments, and their efforts have lead to discussions caused governments to reconsider policies and funding of anti-Israeli organizations.

The Dutch parliament made a decision to denounce funding of BDS, but that decision has yet to be implemented, and expectations are that after the near elections attempts will be made to push the agenda further.

Similarly, Spain’s High Court of Justice approved a decision against the BDS several months ago, and a few days ago one of the country’s ruling parties adopted a bill proposal opposing the organization, calling it “a modern version of anti-Semitism.”

One thought on “Swiss parliament prohibits government funding of BDS”