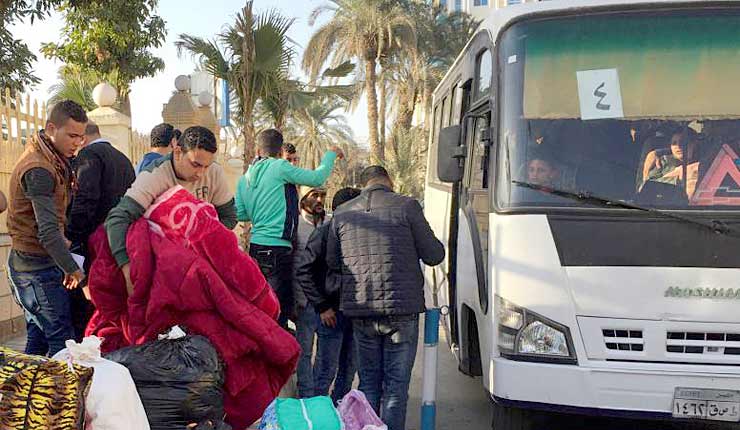 In the last few days, dozens of Coptic Christian families fled El Arish in north Sinai amid an ongoing campaign of murder and threats waged against them by the Islamic State (ISIS). According to reports, at least seven Coptic civilians were killed by ISIS operatives in the city in recent weeks, prompting Coptic families to flee to mainland Egypt.

Some Egyptian sources claim that 85 of the 103 Coptic families in the city have fled; other sources place the figure at 45. Some of these families have taken refuge in the Anglican church in Ismailia, while others have fled to Suez, Minya or Sohag. The Al-Sharq Al-Awsat daily noted that this is the first mass-exodus of Christian families from their homes for reasons of terror.[1]

It should be mentioned that the targeting of Copts is only one manifestation of ISIS’s ongoing activity in El Arish and in north Sinai at large aimed at intimidating the local population and preventing the Egyptian authorities from regaining control of the region. This activity includes demonstrations of force in El Arish, raids on the security forces and attacks on security personnel or their homes, the abduction and murder of civilians for cooperating with the authorities, efforts to enforce shari’a law, and the vandalizing of property, among other actions.

One of the Copts who fled the city described the threats faced by his community: “Lately, murders of Christians increased significantly. People are being murdered every day, and I think it will [only] get worse. The terrorists openly declared they would attack the Christians. I can’t blame the police, because the security situation in Sinai is very bad and terrorism is on the rise.” El Arish Copts said they had received threatening phone calls demanding that they leave their homes, and that ISIS activists had handed out fliers in the city threatening the Christians.[2]

An eight-year-old girl from El Arish said: “I am very sad because I had to leave my friends and my school, and I don’t know if I will go back or not. I saw the threats with my own eyes, on notices and written on the walls of [my] house. I heard what they said to my father on the phone, when they said we had to leave or else they would kill us.” A woman recounted that there was a knock on her door one night, and when her son opened it terrorists burst in, shot him dead and then searched the house for the other men of the family. They found her elderly husband and shot him too, and then they stole her jewelry and set the house on fire.[3]

These events are the culmination of the ongoing terror campaign that has been waged against Sainai’s Christians for years by ISIS and by its earlier incarnation, Ansar Beit Al-Maqdis. This campaign has included the murder of civilians, including priests, as well as abductions, ongoing threats and the targeting of businesses. The campaign became systematic in 2013, when the jihadis in Sinai launched an all-out war against the Egyptian authorities.

This report reviews ISIS’s threats and actions against Christians in Egypt, the reaction of the Egyptian authorities to the crisis, and responses by the Christian religious establishment.