BOMBSHELL NEXIT POLL: More than half of Dutch voters now want to LEAVE the European Union 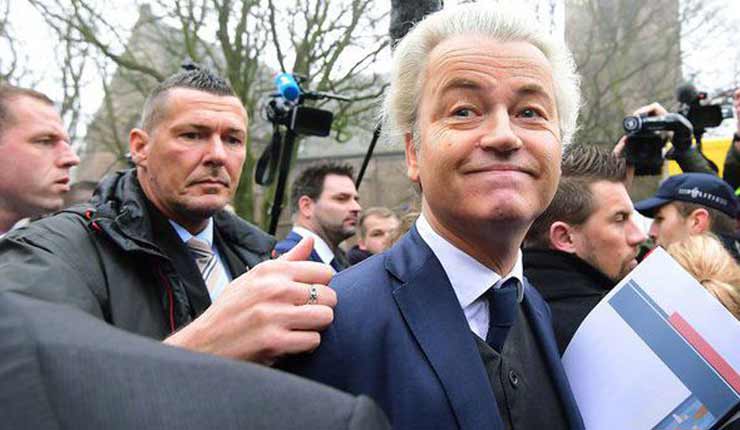 MORE than half of Dutch voters want to leave the European Union and seek an alternative trade agreement with the rest of the continent in the style of Brexit, a bombshell poll reveals today.

Brussels was facing a full blown popularity crisis as the dynamite survey showed 56 per cent of people in the Netherlands want to quit the political project and revert back to simple commercial ties.

The shock result was published just two weeks before Dutch voters are set to go to the polls to elect their new government, with far-right eurosceptic politician Geert Wilders leading in the polls.

It also comes a day after Brussels boss Jean-Claude Juncker openly dismissed the idea of taking the EU back to its roots as a trading bloc, despite including that scenario as a possibility in his landmark white paper.

Eurosceptics today hailed the poll as proof that people across the continent are finally realising the EU has become a “straitjacket” which is leaving the them worse off.

Mr. Wilders is a controversial figure who has expressed admiration for other populist leaders

The eurosceptic Bruges Group think-tank, which commissioned the survey, said: “Across the continent of Europe and beyond people want to take back control of their lives.

“A concerted campaign for Nexit, along the lines that we saw in the UK, can overtime, just like it did in Britain, move the Netherlands towards the exit.

“Britain will welcome our allies, the Dutch people, in a new post-EU Europe.”

The results will alarm eurocrats who have identified Holland, alongside France and Italy, as part of a trio of threats where rising euroscepticism could rip the bloc limb from limb.

The three are facing elections within the next 18 months and all eyes are nervously on the Netherlands, which will hold its first, to see if voters in the country follow the populist example set by Donald Trump and Brexit.

The poll, carried out by the respected Maurice de Hond group, found that once ‘don’t knows’ are excluded 56 per cent of Dutch people would vote to leave the EU compared to 44 per cent who would opt for remain.

According to the results Nexit is slightly more popular amongst women that men, by 57 per cent compared to 56 per cent, and is backed by a majority of voters in all age groups over 25 and by those in large cities.

Part of the reason why the numbers are so high is because the question posed to respondents included the options for the Netherlands to quit the whole EU, but maintain economic ties via a free trade agreement with the bloc.

Given the choice just 39 per cent of voters in the Netherlands actively want to remain in the EU as it is, demonstrating the bloc’s massive loss of popularity in the country.

That it plays out internal Brussels polling which has alarmed eurocrats by showing that the proportion of European voters viewing the bloc positively has slumped from half to a third in just a decade.

Whereas when presented with various options 23 per cent would vote to quit and join the European Free Trade Association (EFTA), the so-called ‘Norway model’ once touted for Britain but which involves accepting free movement.

And a further 27 per cent want to sever ties altogether and negotiate a comprehensive free trade agreement with the bloc, which is the strategy currently being pursued by Theresa May.

Thierry Baudet, the leader of the eurosceptic Forum for Democracy party, said: “More and more people see that the EU is bad for the Netherlands and for Europe.

“It is a straitjacket in which none of us will be better off. Let us work together well, trading and helping each other wherever possible, but without political superstate.”

The poll comes after Dutch voters overwhelmingly rejected an EU treaty with Ukraine granting visa-free access in a referendum last spring, only for the the result to be ignored by polticians in the Hague and Brussels.

People in the Netherlands have repeatedly demonstrated a eurosceptic streak and also voted down the 2005 EU constitution, which was then infamously repackaged as the Lisbon Treaty and railroaded through.