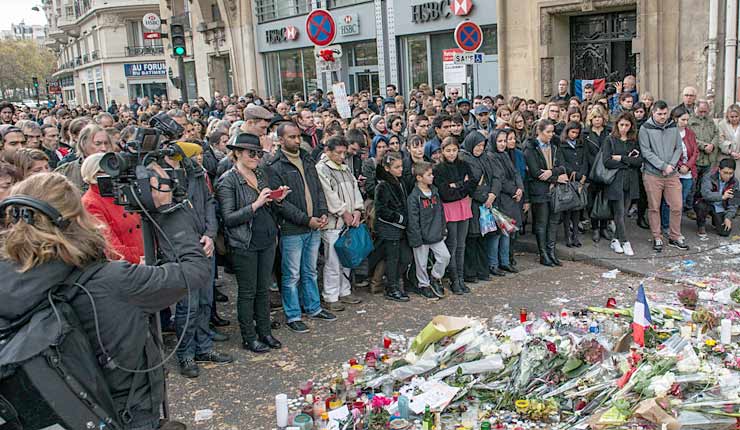 A French government committee has heard testimony, suppressed by the French government at the time and not published online until this week, that the killers in the Bataclan appear to have tortured their victims on the second floor of the club.

The chief police witness in Parliament testified that on the night of the attacks, an investigating officer, tears streaming down his face, rushed out of the Bataclan and vomited in front of him just after seeing the disfigured bodies.

According to this testimony, Wahhabist killers reportedly gouged out eyes, castrated victims, and shoved their testicles in their mouths. They may also have disemboweled some poor souls. Women were reportedly stabbed in the genitals – and the torture was, victims told police, filmed for Daesh or Islamic State propaganda. For that reason, medics did not release the bodies of torture victims to the families, investigators said.

But prosecutors at the hearing claimed these reports of torture were “a rumor” on the grounds that sharp knives were not found at the scene. They also claimed that maybe shrapnel had caused the injuries.

Q. For the information of the Commission of Inquiry….can you tell us how you learned that there had been acts of barbarism within the Bataclan: beheadings, evisceration, eyes gouged out …?

Investigator: After the assault, we were with colleagues at the passage Saint-Pierre Amelot when I saw weeping from one of our colleagues who came outside  to vomit. He told us what he had seen.

Q. Acts of torture happened on the second floor?

Further on the investigator described how this was kept from relatives:

A. Bodies have not been presented to families because there were beheaded people there, the murdered people, people who have been disemboweled . There are women who had their genitals stabbed.

Q. All this would have been videotaped for Daesh !

A. I believe so. Survivors have said so.

Elsewhere, the investigator says, women were sexually tortured, stabbed in the genitals, and their eyes were plucked out. People were decapitated.

The clerk of the inquiry (or “rapporteur”) pressed the chief of committee for clarity on whether victims were decapitated or mutilated. The committee chief replied that the authorities had given out conflicting information that said victims were merely shot or blown up. He then added this damning statement about one victim’s father discovering the gruesome truth in the morgue:

Mr. President Georges Fenech Indeed, the Committee is troubled by this information which has appeared nowhere [in the media]. Thus, the father of one of the victims sent me a copy of a letter he sent to the investigating judge, which I quote in summary: “On the causes of the death of my son A., at the forensic institute in Paris, I was told, and what a shock it was for me at that moment, they had cut off his testicles, had put them in his mouth, and he was disemboweled. When I saw him behind glass, lying on a table, a white shroud covering it up to the neck, a psychologist was with me. He said: This is “the only presentable part, your son’s left profile.” I found that he had no right eye. I made the remark; I was informed that they had punctured his eye and  sliced down the right side of his face, where there was a very large hematoma that we could all see. ”

This particular witness could corroborate the statements that we heard from one of the BAC officials, that one of his investigators vomited immediately on leaving the Bataclan after finding a decapitation and evisceration. Are you aware of such facts?

A prosecutor appearing before the inquiry replied lamely that no sharp knife had been found at the scene that could have been used for torture. Perhaps shrapnel had caused the mutilation, he said. The head of the committee asked if an explosion would have placed testicles in a victim’s mouth:

Prosecutor: I specify, for the sake of clarity: some of the bodies found at the Bataclan were extremely mutilated by the explosions and weapons, to the point that it was sometimes difficult to reconstruct the dismembered bodies. In other words, injuries described this father may also have been caused by automatic weapons, by explosions or projections of nails and bolts that have resulted.

Q. Would those have put a man’s balls in in his own mouth?

Prosecutor: I do not have that information.