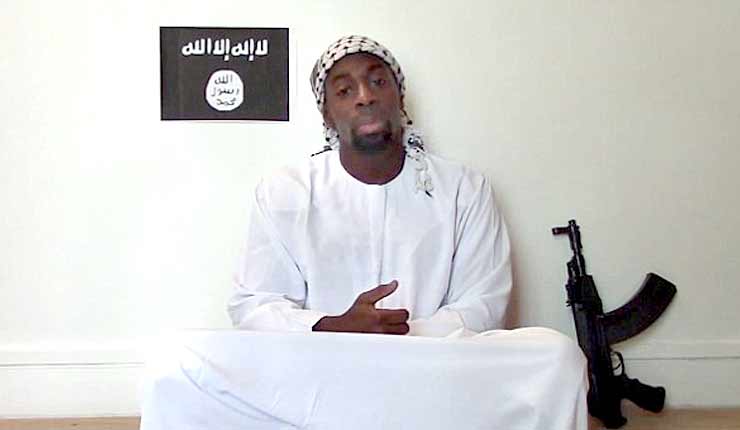 ‘Dress up like a Jew and make sure you have plenty of weapons under your coat’: ISIS fanatics issue chilling call to ‘terrorise’ Jewish people in the West

ISIS fanatics have issued a chilling call for fellow extremists to ‘terrorise’ Jewish communities in the West.
Brainwashed supporters were advised to ‘dress up like a Jew’ and conceal weapons under their coats before ‘unleashing the pain of the Muslims’ on their victims.

The terrifying call to arms emerged on an ISIS-linked Telegram channel called Lone Mujahid – a chat room where aspiring terrorists are encourage to carry out ‘lone-wolf’-style attacks.

ISIS fanatics have urged fellow extremists to disguise themselves as Jews and ‘terrorise’ their communities in the West. The message, on an ISIS-linked Telegram channel, also used a picture of Amedy Coulibaly (above) who attacked a Jewish supermarket in Paris

In a recent post, jihadists were urged to carry out attacks on Jewish communities in the West.

The chat room post said: ‘IF YOU’RE STILL IN THE WEST! Dress up like a Jew! Go to your nearest Jewish area! Make sure you have plenty of weapons under you coat!’

It then urges followers to ‘unleash the pain of the Muslims’.

A separate message includes a list of Jewish communities in Britain, according to Foreign Desk News.
The second posting comes with a picture of Amedy Coulibaly.

The Islamist gunman killed a policewoman in a Paris suburb on January 8 2015 and killed four hostages at a kosher supermarket the following day before being shot dead by police.

Two other gunmen shot 12 people at and near the offices of the Charlie Hebdo newspaper in Paris on January 7.

The Telegram rant calls for fanatics to follow his lead, saying: ‘Take the brother’s example and terrorise the Yahood (Jew)’.

Jihadists have singled out Jewish targets in the past. In 2014, Mehdi Nemmouche opened fire at the Jewish Museum of Belgium in Brussels, Belgium, killing four people.

The 29-year-old, a French national of Algerian origin, was arrested in Marseille and is believed to have spent more than a year in Syria.