Gorka & Jasser: We Are Not Fighting ‘a War With Islam, but a War Inside Islam’ 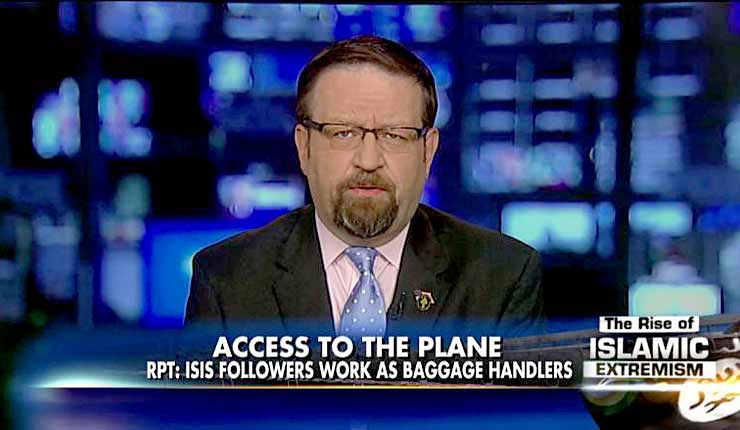 Marlow began by asking his guests what they expected from the national security segment of President Donald Trump’s scheduled address to the Conservative Political Action Conference.

“Exactly what we’ve heard before,” Gorka replied. “If you really want to understand the direction of the White House and how much everything changed at 12:01 on January the 20th, you look at two things: you look at a speech that really wasn’t carefully addressed or really paid enough attention to, that’s the Youngstown campaign speech, which was about the threat of jihad in general and what we’re going to do about ISIS.”

“Specifically, it really bears repeating, the inauguration, the address that the president gave at the inauguration, was explicit,” he continued. “Number one, we are going to eradicate the Islamic State – not degrade, not manage, not ameliorate – eradicate. And secondly, words have meaning. When he says our enemy is ‘radical Islamic terrorism,’ that is a 180 degree change from the last eight years, when we weren’t allowed to even say who the enemy was.”

“Zuhdi knows it better than anybody because he understands that this isn’t about poverty or lack of education. It’s about people who are fighting for the soul of Islam – not a war with Islam, but a war inside Islam; as King Abdullah, as General Sisi has said, for which version is going to win,” Gorka said.

Marlow asked Dr. Jasser about the topic of language control Gorka touched upon and the previous administration’s reluctance to use explicit language like “radical Islamic jihad” to describe the enemy.

“We got to this point because we had an administration who was being whispered to by Muslim Brotherhood sympathizers, by apologists, by governments that might be our allies against al-Qaeda and ISIS, but they love a whack-a-mole program. They don’t want to treat the disease, which is not ‘violent extremism’ but violent Islamism,” Jasser charged.

“We have to start focusing on our own values,” he urged. “There’s nothing more American than fighting theocracy, and yet the Left for the last eight years has invoked blasphemy laws in America by telling us we can’t criticize Islamist political movements.”

Jasser predicted the new administration would succeed in destroying ISIS but warned that “it will come back in another form – two, three, four years later – unless we engage Muslim reformists, like our Muslim reform movement, to treat the underlying theocracy.”

Marlow complained that the mainstream media swiftly denounce candid talk about the problem of radical Islam as “hate speech” even when confined to straightforward reporting without editorial opinion, making it difficult to have a constructive discussion about the problem.

“I think this is exactly what the Saudi regime, the Iranian Khomeinists, the Brotherhood want, is they want to dominate what Islam means,” Jasser said. “And yes, it’s not my Islam, but we have to thread that needle. Because if you don’t call it political Islam or Islamism as the threat, you’re not going to be able to figure out who to engage. We want to engage anti-Caliphate, anti-violent jihad Muslims who are pro-freedom, pro-equality of men and women, who share our values. If we don’t do that discernment in our verbiage, we’re going to miss it and actually end up helping our enemies and end up actually not only being the firefighters, but the arsonists. We have to stop that cycle.”

“Let’s just take it one level deeper. It’s not just empowering our enemies, which would be bad enough,” Gorka added. “If you don’t talk truthfully about who the enemy is, how are you going to win? What we saw in the last eight years is a policy that actually weakened our most important allies.”

“So when you’ve got the president of the most populous Arab nation in the world say this is a war for the heart of Islam, General Sisi, when you’ve got King Abdullah with his Amman statement saying, ‘Look, we have to stop the jihadis hijacking the religion’ – we have a president here who stands up and says, ‘No, no, no, these are not the droids you’re looking for, the religion has nothing to do with this,’” he elaborated, referring to the Obama administration’s insistence on framing the war as a struggle against generic violent extremism.

“Do you know who we hurt the most? Those Muslims who are on the front lines with the jihadis, who understand this isn’t about poverty or lack of education; it’s about an ideology. So we’ve actually hurt the people who are on the front line the most. We’re not prepared to do that anymore. This administration’s going to help the Jordanians, help the Egyptians, help them fight this war,” Gorka vowed.

“I think we have to own what it means to be diverse,” Jasser suggested. “What is ‘diversity’ in the Muslim community? It’s not ethnic diversity. Being Muslim is not an identity movement of a monolithic homogenous group. It is a diverse ideological movement that has fundamentalist, orthodox, liberal, secularists that are all in this Muslim diverse group. So if the Left actually believes in diversity different from what Pelosi whispered into Andre Carson’s ear – ‘Tell them you’re Muslim’ – Islam is not a race. They’re racializing the faith. That’s the biggest obstacle.”

“I think the other thing I hope to see is not only us being against jihadists, but what are we for,” he added. “I think that will be the difference between some of the dictators in the Middle East, that yes, some of them have been on our side against jihad, the militants, but we are the adults in the world, in being for liberty and freedom. I hope that will be part of a Trump Doctrine.”

Gorka agreed, saluting Jasser as “the point man here in America for sense, for common sense in this battle.”

“The saddest part is there are people like him in the Middle East. There are people every day risking their lives on their blog sites, in North Africa, in the Middle East pushing back on this, saying, ‘I’m a Muslim, but I don’t think an infidel needs to be killed.’ That means he’s put the crosshairs on his chest,” Gorka noted. “In some parts of the Muslim world, that’s an instant death sentence.”

“That’s why the four million Muslims in America need to step up and act because we can do things here that you just can’t do in the Middle East,” Jasser said. “They end up in prison. They end up slaughtered, tortured.”

Marlow proposed that “the stifling of speech in the Muslim world is really what has allowed a lot of the jihadist movements to flourish.”

“Why do you think they use the term ‘Islamophobia’ instead of talking about, yes, there might be some bigotry against Muslims in the West?” Jasser asked. “They use the term Islamophobia because they want to anthropomorphize Islam so that you don’t criticize it, and they suppress free speech. That’s how they invoke blasphemy laws in the West.”

“You’re absolutely right. The freedom of speech issue is huge in the Middle East because it’s a life and death issue in many cases,” Gorka said. “But here, it’s almost as important. It’s not life and death, but it is closing down the discussion.”

“You look at what’s happened in the last four weeks with this administration,” he said. “There’s a phrase in soccer: you play the man on the ball. We’re not going to talk about policies; we’re going to attack individuals, whether it’s Kellyanne, the president, myself, Steve Bannon. They do that how? ‘We don’t want to talk about the threat to America. You’re a racist. You’re an Islamophobe. You’re a xenophobe. Oh, well, in that case, we can’t talk to you.’ That’s as dangerous as just the constant ad hominem attacks because then there is no discussion.”

Jasser said his message to CPAC was that “there is hope” for a lasting victory in the long war against Islamist extremism.

“The first step is to defeat the militants, which this president will finally do,” he said. “The second step is to go back to our American roots and defeat theocracy, work with Muslims and our Muslim reform movement. We have a two-page declaration that can be used, I hope, not only to vet refugees, to figure out which groups are with us and against us. I hope we start doing security clearances through those who share our values.”

“There are so many that are – not in this administration, but that are in the government from the previous administration – that I think are Islamists, that might not be violent extremists, but we need to shift the axis of the lens of Homeland Security, foreign policy, to countering violent Islamism. There’s nothing this group here and the country can do to better empower reform-minded Muslims that share our values than to shift from this blasé CVE to CVI,” Jasser said, lampooning the Obama administration’s acronym for “Countering Violent Extremism.”

Gorka referred to CVE as “garbage from the last eight years that obfuscated the threat.”

He said the most important step taken by the new administration was President Trump’s executive order to temporarily limit immigration from the most unsecure Middle Eastern nations.

“Whatever the final version of the reform measures are, the fact is, when an Iraqi collars me in the halls of Congress and says, ‘My friends back home in Iraq applaud this measure because they know how many bad guys are in Iraq that want to come over here, so do it. Thank you,’” Gorka said.

Dr. Sebastian Gorka is deputy assistant to President Trump and was formerly national security editor for Breitbart News. He is the author of Defeating Jihad: The Winnable War. Dr. Zuhdi Jasser is the founder and president of the American Islamic Forum for Democracy and author of A Battle for the Soul of Islam: An American Muslim Patriot’s Fight to Save His Faith.

Breitbart News Daily airs on SiriusXM Patriot 125 weekdays from 6AM to 9AM Eastern.

Listen to the audio of the full interview above.

One thought on “Gorka & Jasser: We Are Not Fighting ‘a War With Islam, but a War Inside Islam’”