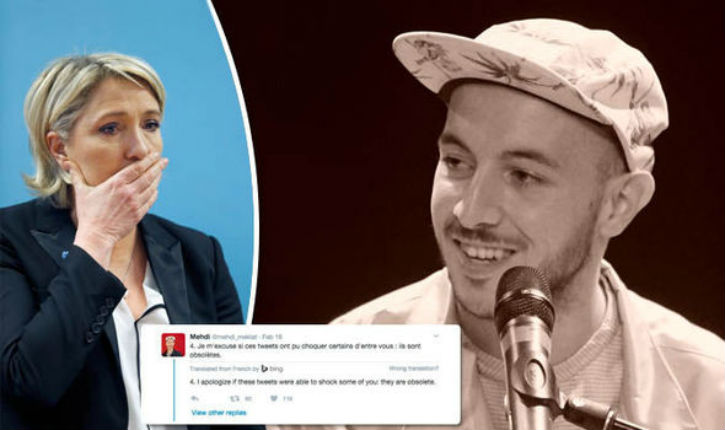 A 24-year-old Muslim blogger and so-called human rights activist, Mehdi Meklat, who was considered a rising star in France’s media, was outed for publishing vicious tweets under the pseudonym of “Marcelin Deschamps” that called for the killing of Marine Le Pen, the president of the National Front political party.

In one tweet, Meklat wrote, under the name of Deschamps, directly to Le Pen: “I am going to slit your throat Muslim-style.”

Meklat also sent around several tweets that praised Islamic terrorists Mohammed Merah, and that expressed his wish to “bring back Hitler,” the Express reported.

Other tweets: He said he wanted to “rape” former Charlie Hebdo editor-in-chief, Charb, with a “Laguiole knife.” And he said he “really missed Osama bin Laden.”

After Meklat was discovered to be the real writer of the messages, he cleared his Twitter feed and sent out a public apology.

“He tweeted: ‘I’m sorry if some of you were shocked by my tweets. They are obsolete… The words of my fictional character do not reflect my own personal thoughts and beliefs, quite the opposite. Via Marcelin Deschamps, a provocative character, I was trying to encourage critical thinking.’

“His apology, however, has largely fallen on deaf ears.

“Members of the Printemps républicain, a left-wing organisation explicitly formed to promote and protect secularism in France, bitterly condemned Mr Meklat’s tweets in a press release and said that, had he been a member of France’s far-right, he would have been excoriated and denounced by the press ‘a very long time ago.’

“They wrote: ‘For years, Mr Meklat published racist, sexist and hate-filled tweets. And yet, editors and newspapers continued to hire and support him.

“‘If a far-right journalist had tweeted what Mr Meklat tweeted, he would have been lynched by the press and would probably have ended up in court.’”


Gorka & Jasser: We Are Not Fighting ‘a War With Islam, but a War Inside Islam’ German Intelligence Warns of Massive Increase in Islamist Threats