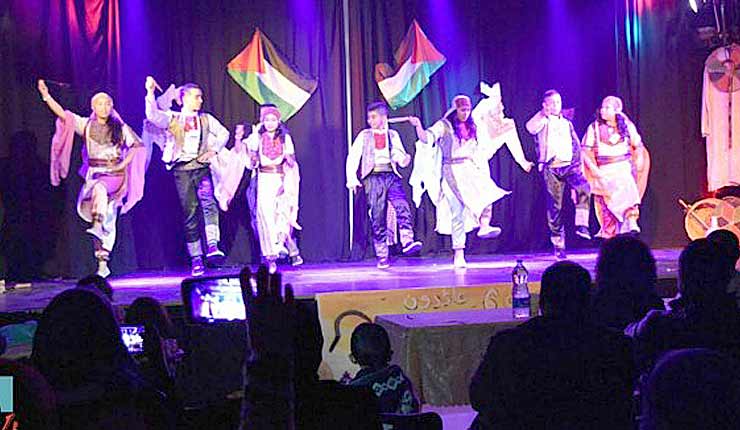 The winning performance at a recent Palestinian youth dancing competition in Nablus called for violence against Israel and featured the lyrics “jihad is needed, pull the trigger,” the watchdog organization Palestinian Media Watch reported Monday.

The event took place at the Yafa Cultural Center, which is funded by Germany, Norway, and the European Union itself. The winning dance was performed by 14-year-old Ru’a Ahmed Sa’id Hamdan to the song “Pull the Trigger,” which was previously broadcast on a Palestinian Authority television channel in 2010.

The song includes the lyrics:

We replaced bracelets with weapons
We attacked the despicable [Zionists]
We do not want [internal] strife or disputes
While this invading enemy is on the battlefield
This is the day that Jihad is needed
Pull the trigger.
We shall redeem Jerusalem, Nablus and the country.

Hamdan and the competition’s top two runners-up received trophies bearing a map of “Palestine” that encompassed the entirety of Israel and the Palestinian territories. Incitement to violence against Israel is a recurring theme in music promoted by the Palestinian Authority. During the ruling Fatah party’s conference late last year, an official PA television channel repeatedly played a song calling “to free the state from the hands of the Zionists” and to “slice open the enemy’s chest, slice it.”

The New York Times reported in October 2015—at the start of the so-called “knife intifada”—that violent, “nationalistic” tracks were dominating Palestinian airwaves, with one young listener saying the tunes make him “boil inside” and prepare him to throw stones at Israeli soldiers. The songs feature lyrics such as “stab the Zionist and say God is great” and “say hello to being a martyr,” and their accompanying videos often contain graphic imagery.

Music from the Gaza Strip, which is ruled by the terrorist group Hamas, similarly incites its audience to violence against Israel. A Gaza-based Palestinian band released a music video in December telling Jews to flee before the Palestinians “burn down” Tel Aviv, “or else your body parts will be collected and you will go to Hell to be roasted in its fire.” Earlier this month, Hamas released a video filled with stereotypical anti-Semitic images that warned, “Zionist, a rocket will get you where you live.”

Israeli officials have accused Palestinian incitement, both by leading officials and on social media, of fueling terrorist attacks. The aunt of an Arab teenager who stabbed an Israeli security guard last year said the girl may have been influenced by online videos encouraging attacks. The Shin Bet, Israel’s internal security agency, attributed a stabbing attack in which an Israeli mother of six was killed by a Palestinian teenager in January 2016 to similar incitement. “On the day of the murder, while under the influence of the programs he had been exposed to on Palestinian television, the minor decided to commit a stabbing attack with the goal of murdering a Jew,” the agency said in a statement.