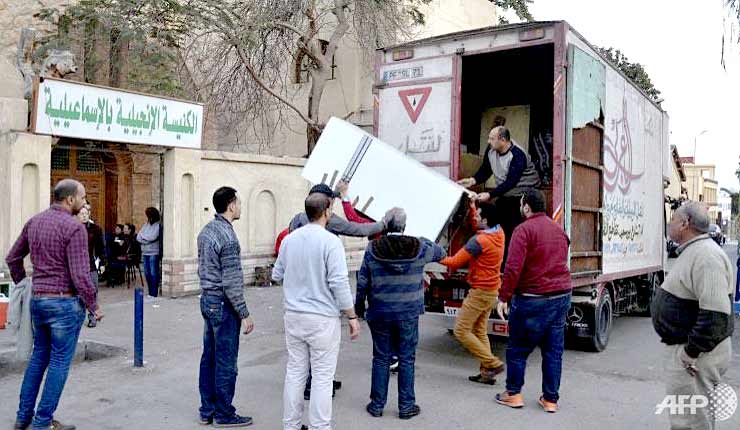 EL-ARISH/CAIRO: Suspected militants gunned down a Coptic Christian inside his home in northern Sinai, the sixth such killing in a month’s time in the restive region, officials said on Friday, prompting some Christian families to flee from the area.

On Thursday, suspected Daesh militants killed a member of the minority religious group in the north Sinai city of El-Arish and set his house on fire, the third such attack this week.

The militants stormed the home of Kamel Youssef, a plumber, and shot him to death in front of his wife and children, said two officials, speaking on condition of anonymity because they were not authorized to talk to reporters.

No militant group has claimed responsibility for the attack but earlier this week, Egypt’s Daesh affiliate, based in the Sinai Peninsula, vowed in a video to step up attacks against the embattled Christian minority. A spate of killings by suspected militants have spread fears among the Coptic community in El-Arish as families left their homes after reportedly receiving threats on their cellphones.

A day before Youssef’s killings, militants killed a man and burned his son alive, then dumped their bodies on a roadside in El-Arish. Three other Christians in Sinai were killed earlier, either in a drive-by shooting or with militants storming their homes and shops.

About 250 Christians took refuge in the evangelical church in the Suez Canal city of Ismailiya, said church Deacon and Administrator Nabil Shukrallah.

A target of extremists, the Christians supported President Abdel-Fattah El-Sisi, and his security crackdown on radicals since the removal of former President Mohammed Mursi.

The northern region of Sinai, bordering Gaza Strip and Israel, has been the battleground between the military and militants since 2011 when the region sank into lawlessness during the 18-day uprising that led to the ousting of President Hosni Mubarak.

El-Sisi declared a state of emergency and imposed a curfew in the volatile region in 2014, in the aftermath of deadly suicide bombings that killed over 30 soldiers. Blaming the stepped-up militancy on Gaza’s ruling Hamas group, which uses underground tunnels for smuggling contraband, the Egyptian military razed hundreds of houses in the border area to the ground, to create a buffer zone and stop what it described as the infiltration of extremists from Gaza.

Since 2013, militants have carried out several suicide bombings across Egypt, mainly against the police and the army. However, in December, a Daesh-affiliated suicide bomber blew himself up inside a landmark Cairo church, killing around 30 worshippers, mostly women.

That attack marked a turn in the militant group’s strategy as Christians became its top targets. The extremists have used Christian support for El-Sisi as a pretext to increase attacks against them.

Christians have been attacked before in Sinai, where the Daesh’s Egyptian affiliate is waging an insurgency, but there has been a surge of attacks since Daesh released a video on Sunday calling for violence against the minority. The video included an anti-Christian speech by a militant who later detonated an explosive vest in a Coptic church in Cairo on Dec. 11, killing 29 people.

Other church officials said they have also received Copts fleeing the peninsula.

On Wednesday, police officials said two Coptic Christians, a father and son, were shot dead behind a school in El-Arish.

Copts, who make up about 10 percent of Egypt’s 90 million population, say they are sidelined in both the education system and state institutions.

Mursi’s overthrow, which came after millions of protesters demanded his resignation, was also supported by Egypt’s top Muslim institution, Al-Azhar.
Mobs attacked dozens of churches and Christian properties in August that year after police killed hundreds of demonstrators while dispersing a Cairo protest camp.