Anti-Semitism is the new social justice 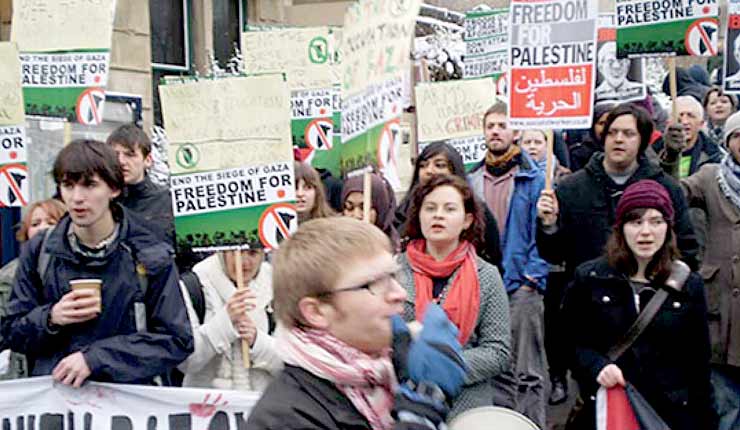 Hating Israel is the thing to do today on university campuses. It makes you seem “progressive.” It means you’re “woke” and socially aware. It means you’re fighting against a tyrannical regime. It is supporting the struggle of an oppressed people at the hands of White colonialist supremacy. Zionism is racism. Israel is evil, end of story.

Zionism is the support for and affirmation of the Jewish right to self-determination in their indigenous homeland of Israel. It’s the Jewish Civil Rights Movement. It is the struggle of a native people who have been oppressed for thousands of years, expelled from their land, killed and persecuted wherever in the world they went. It is the celebration of victory, of the return home after millennia of diaspora, of surviving and flourishing against all odds.

That sounds like something the Left would wholeheartedly support, right? Not anymore. The dominant narrative on campuses is that Israel is Nazi Germany 2.0, that Israelis are White Europeans who colonized the land of Palestine after WWII. The screams of “apartheid” and “genocide” go unquestioned. Israel is evil, end of story.

Nobody talks about the 850,000+ Jewish refugees expelled from Arab lands. Nobody mentions that the majority of Israelis are these refugees or descended from these refugees, not from Europe (not that European Jews are White). Nobody clarifies that Israeli Arabs have all the same rights as Jews in Israel, or that Arabs hold seats in Israeli Parliament, serve in the military, and are doctors and celebrities and shopkeepers and lawyers and teachers. Nobody mentions the thousands of Palestinians treated at Israeli hospitals and employed at Israeli businesses. Israel is evil, end of story.

So what should students do? There are many things students can do to show their hate for Israel. There’s the Boycott, Divestment, Sanctions movement, which supports labeling and boycotting Israeli products and cutting off ties with Israeli universities. Just pretend that these boycotts aren’t hurting Palestinian workers who make Israeli products. Just forget about academic integrity. There’s holding an Israeli Apartheid Week, which spreads vicious lies about the Jewish State to unsuspecting students. There’s supporting literal terrorists, as Students for Justice in Palestine does so very proudly. There’s targeting and harassing Jewish students. There’s screaming and shutting down events based on a speaker’s nationality and religion. There’s demanding an event be cancelled because it’s being hosted by a Jewish organization. And then, there’s protesting Holocaust Education Week in the name of Social Justice.

At Ryerson University in Toronto on November 29th, 2016, students from the Muslim Student Association and Students for Justice in Palestine held a walkout at a student meeting proposing Holocaust Education Week. They degraded and intimidated Jewish students. They said they did it because there are other genocides that need awareness. That’s like protesting against breast cancer research because there are other cancers. The real reason is simply anti-Semitism.

Anti-Semitism is the acceptable form of bigotry on the Left. It’s thinly veiled as “anti-Zionism,” which really is just anti-Semitism with a fancy name, as it opposes the Jewish Indigenous Rights movement. Students are expected to hate Israel in the name of being progressive. Jewish students are painted as privileged racists, unless they disavow Israel and abandon their indigenous struggle in order to assimilate. My people (Muslims) are portrayed as helpless victims of ruthless Jewish aggression. Palestinians become pawns in the game of Jew hatred. The world falls for it. Israel is evil, end of story.

Studies show that a campus with an active Students for Justice in Palestine (SJP) chapter is more likely to have anti-Semitic incidents (no surprise there). My university, Binghamton University in New York, is unique in that the pro-Israel voice is the most dominant narrative. We used to have an SJP problem, but to my knowledge, they disbanded after the administration cracked down on their anti-Semitic harassment. Now our Muslim Student Association partners with our Hillel for mosque-synagogue interfaith trips. The Jewish and Muslim communities here are on good terms, because we see each other as people. We don’t allow the Israeli-Palestinian conflict to define us.

Anti-Semitism is unacceptable, even if it’s trendy.