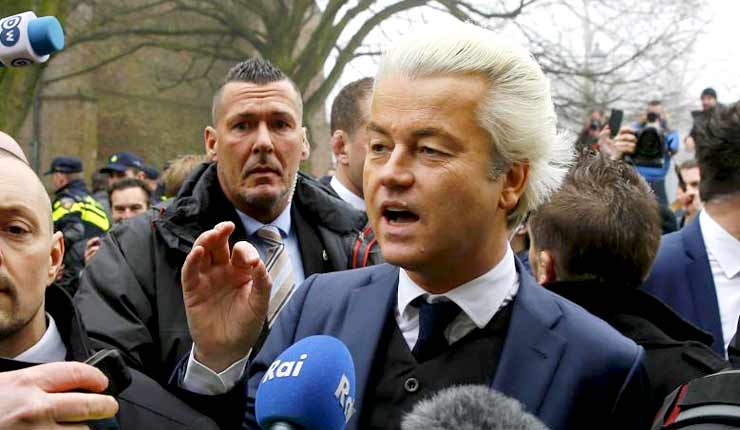 A Dutch secret service agent who was part of the team responsible for protecting Geert Wilders, the frontrunner in next month’s election, has been suspended on suspicion of leaking details to a criminal organization, the secret service said on Wednesday.

Wilders, who campaigns on an anti-Islam platform that includes closing mosques and banning immigration from Muslim countries that has led to the protection, condemned the alleged breach, saying he cannot function without adequate security.

Dutch newspapers De Telegraaf and NRC Handelsblad and the country’s national broadcaster NOS identified the suspect as an experienced officer in his mid-30s, using his first name and last initial.

Secret Service chief Erik Akerboom said he could not confirm the man’s identity but confirmed media reports he has a “Moroccan background”.

Akerboom told Business News Radio that “as far as we know” Wilders’ safety had not been jeopardized.

Wilders has frequently railed against rogue elements within the Netherlands’ Moroccan community and pledged to crack down on “Moroccan scum” who he said were making the streets unsafe as he launched his campaign on Saturday for the March 15 vote.

The agent who was suspended was one of a team tasked with prescreening locations where Wilders is scheduled to make public appearances. He was not a member of Wilders’ physical protection team, Akerboom said.

“My heavens” Wilders tweeted. “If I cannot blindly trust the service that’s supposed to protect me, then I cannot function.”

Prime Minister Mark Rutte met Wilders, his chief opponent in the vote, to discuss the suspension.

The ANP News agency reported that Rutte declined comment after emerging from the meeting with Wilders and Justice Minister Stef Blok.

“I can say nothing about these kinds of conversations,” Rutte said, repeating his standard response to questions on security measures.

Other Dutch politicians reacted with concern, including Wilders’ most vocal critic, Alexander Pechtold of the centrist D66 Party.

“These are very alarming initial reports, and they must be terrible for Wilders to hear,” he said in a tweet. “We must not be naive. More clarification quickly, please.”


Obama gave secret consent for Iran to develop ballistic missiles with a range of only 2,000 km – that is, capable of striking Israel but not Europe Just Another Muslim Pre-School Teacher