Obama gave secret consent for Iran to develop ballistic missiles with a range of only 2,000 km – that is, capable of striking Israel but not Europe 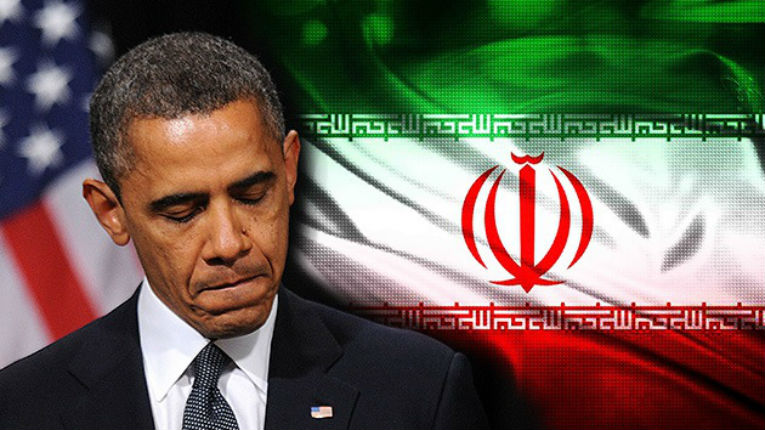 On January 30, 2017, U.S. sources announced that Iran had conducted a failed test of a new ballistic missile, the Khorramshahr. According to reports, the missile exploded after a 965-km flight.[1] Both Iranian Foreign Minister Zarif (on January 31) and Defense Minister Dehghan (on February 1) stressed that Iran “asks permission from no one in the matter of its defense program.”[2]

It should be emphasized that contrary to statements by Iranian regime spokesmen who say that Iran’s missile program is defensive, missiles with a 2,000-km range are strictly offensive and strategic. This is why Iran has faced constant demands to stop developing them.

In the years that preceded the U.S.-Iran nuclear talks, Iran developed ballistic missiles with ranges of 2,500-5,000 km that threaten Europe and even the U.S.

Dr. Hassan Abbasi, theoretician of Iran’s Islamic Revolutionary Guards Corps (IRGC) and director of the IRGC Center for Borderless Security Doctrinal Analysis, said in 2004: “We have a strategy drawn up for the destruction of Anglo-Saxon civilization and for the uprooting of the Americans and the English.

“Our missiles are now ready to strike at their civilization, and as soon as the instructions arrive from Leader [Ali Khamenei], we will launch our missiles at their cities and installations… And because of Khatami’s policies and dialogue between the civilizations, we have been compelled to freeze our plan… and now we are [again] about to carry out the program… The global infidel front is a front against Allah and the Muslims, and we must make use of everything we have at hand to strike at this front, by means of our suicide operations or by means of our missiles.”[3]

The London-based Saudi daily Al-Sharq Al-Awsat also reported, on June 14, 2004, that the Shihab 4 and Shihab 5 long-range missile projects had been revived, on orders from Iranian Supreme Leader Ali Khamenei.[4]

It should be noted that a December 14, 2013 report on Iran’s missile program published by the IRGC-affiliated Mehr news agency immediately following the Geneva Agreement provided details on the various Shihab models. According to the report, Shihab 3D missiles, with a range of 2,200-3,000 km, “can easily reach the occupied territories [Israel]… and cover their entire area.” The report also stated that the Shihab 4 has a range of 3,000 km and the ability to launch satellites into orbit, and that “very little information” has been published about the Shihab 5. The diagrams in the article also feature a Shihab 6 model.[5]

U.S. Approves Iranian Development Of Missiles With A Range Of Only 2,000 km – That Is, Capable Of Reaching Israel

However, after U.S.-Iran negotiations began, and at the end of their first stage, in Geneva in November 2013, Iranian officials began reporting that Iran’s missile program for missiles with ranges above 2,000 km was being restricted.

Thus, for example, immediately after the interim agreement was reached in Geneva, on December 10, 2013, and in reference to it, IRGC commander Mohammad Ali Jafari said that Iran is capable of producing missiles with a range of over 2,000 km but that Khamenei had restricted the IRGC to a 2,000-km range: “We want to increase the range of the IRGC’s missiles, but despite this, the Leader [Khamenei] has restricted us to a range of 2,000 km. We have the capability to increase the range of our missiles, and our missiles should obviously reach Israel… The regime’s red lines were not crossed during the nuclear talks with the P5+1 [Group] and in the Geneva Agreement.”[6]

Indeed, IRGC commanders stressed that the most important thing for the regime was missiles capable of striking Israel; see, for example, comments by IRGC Aerospace and Missile Division director Amir Ali Hajizadeh, who said following a 2016 missile launch: “For us, Israel’s evil is totally clear, and the 2,000-kilometer range of our missiles [is intended] to confront the distant Zionist regime.”[7]

Extensive quotes regarding the Iranian regime’s explicit intent to target Israel with its missiles can be found in MEMRI Inquiry & Analysis No. 1135, Iranian IRGC Missile Unit Commanders: We’ve Developed 2,000-km Range Missiles And Equipped Hizbullah With 300-km Range Missiles; Fars News Agency: Israel’s Illusions About Its Natural Gas Fields Will Be Buried In The Mediterranean, December 3, 2014, and Special Dispatch No. 6349, Iran Launches Long-Range Missiles Emblazoned With Slogan: ‘Israel Should Be Wiped Off The Face Of The Earth’, March 16, 2016.

Iranian missile emblazoned with the slogan ‘Israel Should Be Wiped Off The Face Of The Earth” (Fars, Iran, March 9, 2016)

On November 17, 2014, the IRGC-affiliated Tasnim news agency posted a diagram explaining that Iran “makes do” with a range of 2,000 km, which it considers “desirable” and which covers all of Israel: “On the Firing Line – The commanders of the army of the Islamic Republic [of Iran] have said several times that with its attainment of long-range missiles with a range of up to 2,000 km, Iran has arrived at the range ceiling that it considers desirable, and that ‘in the meantime’ there is no need to increase this range. Although the U.S. is 11,000 km from Iran, in recent years it has approached the borders of Iran, [and therefore] its military bases, equipment, and forces are a target for Iran’s missiles.

“Likewise, the Zionist regime is the most important enemy of Iran in the region, and is less than 1,200 km away. Therefore, short- and medium-range missiles are sufficient to strike U.S. bases near Iran, and long-range missiles are sufficient to strike the occupied territories [Israel]. The diagram shows several of these American bases and [also] the missiles that are counting [down] to the moment [when they will be able to] strike them.”[8]

Is U.S. Permission For Iran To Develop Missiles With Ranges Up To 2,000 km – Which Reach Israel – A Secret Annex Of The JCPOA, Or Simply Unwritten Consent?

In statements, IRGC officials hinted that restrictions on the range of Iranian missiles so that they reach Israel but not Europe were part of the Iran deal. Thus, for instance, IRGC commander Mohammad Ali Jafari referred to the IRGC’s November 2, 2015 consent to UN Security Council Resolution 2231, saying: “One of the points in this resolution was the matter of restrictions, which some military elements feared. Therefore, we held meetings in [Iran’s] Supreme National Security Council, and also went to the Leader [Khamenei]. The [Iranian] negotiating team told the Westerners that we do not agree to these restrictions. They [the Westerners] said that these issues must be included in the resolution. Even when I met with the Leader, he said that there were no restrictions on developing defensive capabilities. The only restriction relates to nuclear missiles, which, obviously, we never wanted.”[10]

The next day, on November 3, 2015, Iranian Army chief of staff Hassan Firouzabadi referred to Jafari’s remarks, saying: “I confirm statements by the IRGC commander that Iran’s missile activity is not restricted. We will follow two restrictions: The first is mentioned in the JCPOA, in the matter of no nuclear planning, and the second is the range of 2,000 km, which has already been noted previously by all elements in Iran.”[11]

It should be noted that the Hebrew version of this news, which IRIB published on November 4, 2015 explicitly mentioned, in both the headline and the text, that the JCPOA allows Iran to possess ballistic missiles of a range of 2,000 km. The Hebrew news item read:

“The chief of staff of Iran’s armed forces, Maj.-Gen. Hassan Firouzabadi, stressed that the state, under orders from the general commander [i.e. Khamenei] of the IRGC, undertakes, inter alia, to restrict nuclear planning, but that it is entitled to produce missiles with a range of 2,000 km.

“Firouzabadi made these statements yesterday (Tuesday) to a group of Islamic regime leaders and officials, and referred to [statements by] the IRGC general commander emphasizing that Iran would commit to the sections of the nuclear agreement with the West that include a restriction on nuclear planning, and that in addition, Iran is entitled to possess missiles with a range of 2,000 km.”[12]

These statements indicate that although the permission given to Iran to develop missiles capable of striking Israel is likely not a secret annex of the JCPOA, it still constitutes unwritten consent that is an integral part of the nuclear deal. It is convenient for both sides not to publish this understanding in written form – for Iran because it rejects any public reference to its missile program, which it defines as defensive but is in fact offensive; and for the Obama administration, because there would be repercussions if it were to be revealed that it had given Iran permission to develop missiles capable of striking Israel.

It should be noted that UN Security Council Resolution 2231 (2015) constitutes an additional concession by the Obama administration to Iran, in comparison with the previous resolution 1929 (2010). This concession has two components:

One, UNSCR 1929 banned Iran from conducting any activity concerning missiles capable of carrying nuclear warheads, while UNSCR 2231 replaced the word “capable,” which refers to objective specifications, with the phrase “designed to be capable” which concerns fluid political matters.

Following Iran’s May 9, 2016 missile test, which took place after the JCPOA’s Implementation Day – and which embarrassed the Obama administration – IRGC Aerospace and Missile Division director Amir Ali Hajizadeh said: “The Americans are telling [us]: ‘Don’t talk about missile affairs, and if you conduct a test or maneuver, don’t mention it.'”[13]

*A. Savyon is Director of MEMRI’s Iran Media Project; Y. Carmon is President of MEMRI; U. Kafash is a Research Fellow at MEMRI.

[3] Shargh (Iran), June 5, 2004; Al-Sharq Al-Awsat (London), May 28, 2004. Also see MEMRI Inquiry & Analysis No. 181, The Internal Debate in Iran: How to Respond to Western Pressure Regarding Its Nuclear Program, June 17, 2004; MEMRI Special Dispatch No. 723, Iran’s Revolutionary Guards Official Threatens Suicide Operations: ‘Our Missiles Are Ready to Strike at Anglo-Saxon Culture… There Are 29 Sensitive Sites in the U.S. and the West…’, May 28, 2004; and MEMRI TV Clip No. 252, Iranian Revolutionary Guard Official In Tehran University Lecture (Part II): We Plan To Target US Nuclear Warheads On US Soil; Should Take Over England, May 22, 2004.

[4] A military source in the Iranian Defense Ministry stated: “In a meeting last week with Revolutionary Guards commanders, Khamenei said that Israel was planning to attack Iran’s nuclear installations and the Iranian military soon, and therefore defense and military preparedness should be boosted as soon as possible. Khamenei stressed that the increase in petroleum prices allowed Iran to allocate a larger budget to its military projects. [Iran’s] Ministry of Defense received $1 billion to resume its Shihab 4 and Shihab 5 project. It is known that in the past, Iran conducted an experiment with Shihab 3 missiles whose range is 1,200 kilometers [and which can reach Israel], but [President] Khatami halted the project of the Shihab 4, whose range is 2,800 [which covers Western Europe], and the Shihab 5, whose range is 4,900-5,300 km [and which can reach the U.S.], because he thought it was a project incompatible with Iran’s strategic interests and defense needs.” Al-Sharq Al-Awsat (London), June 14, 2004.

[13] See MEMRI Special Dispatch No. 6430, IRGC Aerospace And Missile Force Commander: The Americans Are Telling Us ‘Don’t Talk About Missile Affairs, And If You Conduct A Test… Don’t Mention It’, May 15, 2016.