There’s change in the air 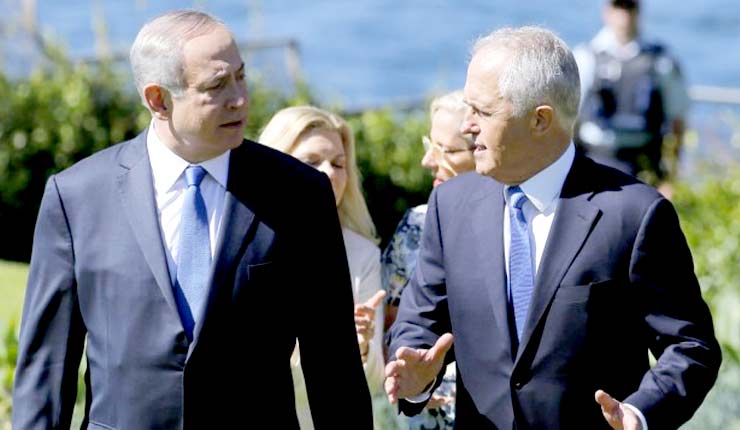 It’s almost autumn in Australia and with the change of seasons comes a change in the air. The nights, though still warm, begin to slowly cool.  The days, while still hot, begin to become shorter. And the endless days of summer no longer stretch into eternity.

Like the seasons, there’s a change in the air of world diplomacy. The hostility shown towards Israel for so long has begun to waver. It doesn’t mean it’s gone, or is even on the verge of disappearing, but something is stirring in the air.

When Benjamin Netanyahu arrived in America last week, he was greeted with a warmth from the White House that had been missing for far too long. He was treated with a respect that had vanished over the preceding years. More importantly, he was treated like an adult, no longer subject to the dire warnings, the finger wagging and lectures from Obama and Kerry – dictating to Israel how they know what’s best.

Similarly when he arrived in Australia today for his first official visit, he was once again treated with a warmth and sincerity and a real admiration for his country. The words spoken by the Australian Prime Minister, Malcolm Turnbull, were genuine words of real respect, not empty declarations of ‘shared values’ and ‘fighting terrorism’ the way France delivers them and then proceeds to try force Israel into agreements that will endanger her security.

Even Britain has suddenly found a voice in criticising the discriminatory travel bans against Israeli citizens to Arab countries as well as recognising and condemning the one sided apportion of blame against Israel the way John Kerry did in his endless delivery of morose speeches.

At the UN, a definite warm breeze has blown through the cold and soulless chambers as the new US Ambassador to the UN, Nikki Haley, called out the Security Council for their hypocrisy at their constant fixation at condemning Israel at all costs, ignoring the real global security issues for which they were actually created.

In Africa, there are countries beginning to catch that Israeli breeze as it whisks through their hills and valleys and cities, bringing technology, knowledge and a real effort to improve their lives. In Muslim countries like Azerbaijan and Kazakhstan, Israel is warmly received, not cast aside to distant corners of the room that no one wants to visit.

Of course, with any change in seasons, the weather can still be highly volatile, and there remains many countries fixated on recognising an Arab spring that brought no warmth, no comfort and no stability, just an increased and icy hostility to the world. And yet, they remain desperate to cling to it, even as it blows them away with impunity.

For too long the Obama administration betrayed their own values of freedom and democracy by purposely making Israel the bad guy, determined to portray Israel as the one who was the obstacle to peace, the harbinger of bad tides, the barrier to a peaceful resolution. As the strongest democracy and leader of the free world, they gave permission for the rest of the countries to follow and adopt that same attitude – treating Israel with a disdain and pettiness, not understanding the core of the country and the heart of its people.

But no season lasts forever, and towards the end of that administration a shift began, a shift that you could feel ever so slightly in the air.

For the first time in a long time Israel is becoming global again, reaching out and being received by countries far and near, recognising the important role Israel plays in the world, recognising the contribution she makes, and recognising that Israel is no longer the problem many in the would want you to believe it is.

It remains to be seen whether this shift in the global atmospheric currents above us is simply an unseasonably burst of freshness, or a long time weather shift, but whatever it is or isn’t, there’s a definite change in the air.

And it feels good.

Justin Amler is a noted Australian writer and commentator on international issues. He can be followed on Twitter: @JPlayMan11