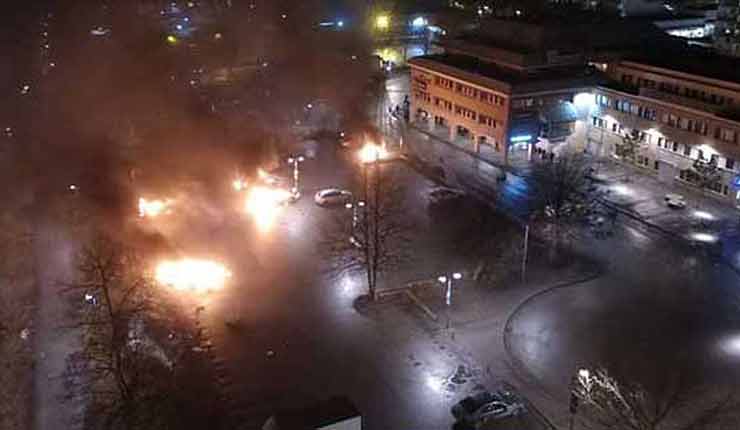 When Trump said that Sweden is in trouble, the trouble could not wait to prove him right.

On Monday night police were forced to fire warning shots in the immigrant dense Stockholm suburb of Rinkeby, after several people started throwing stones at police.

– We are still in the area, says Eva Nilsson of the Stockholm police, to Expressen.

The alarm came to the police at 20:18 on Monday evening.

When police detained a person at the subway, several people began throwing stones at the police.

The police patrol was so pressured that they were forced to fire warning shots in the air.

– It has calmed down a bit now, it is not about any open fights, so to speak, says Eva Nilsson.

A police officer was hit by a stone on his arm, but it is unclear how seriously injured he was.

Police classify the event as assaulting a police officer and rioting. Photos of the site show that many cars are on fire.

Police have retreated without completely leaving the scene.

– There is no activity at the site now, but we are still in the area, says Eva Nilsson.


Is the Muslim Student Association of Canada/USA a Recruiting Point for Extremism? Is Venezuela a State Sponsor of Terrorism?