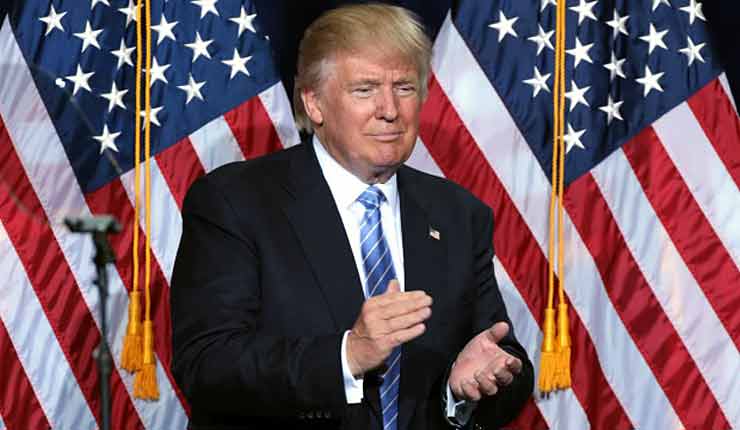 Antisemitism is “horrible” and “has to stop,” US President Donald Trump said on Tuesday during a visit to the National Museum of African American History and Culture in Washington, DC.

In a statement to the press delivered at the museum, Trump referred to the recent surge of antisemitism in the US — including a spate of telephone bomb threats against Jewish community centers across the country and the desecration of graves at a Jewish cemetery in St. Louis.

“The antisemitic threats targeting our Jewish community and community centers are horrible and are painful and a very sad reminder of the work that still must be done to root out hate and prejudice and evil,” Trump said.

Earlier on Tuesday, in an NBC interview, Trump said antisemitism was “age-old.”

“There is something going on that doesn’t allow it to fully heal,” he stated. “Sometimes it gets better and then it busts apart. But we want to have it get very much better, get unified and stay together.”

On Monday, Trump’s daughter Ivanka tweeted, “America is a nation built on the principle of religious tolerance. We must protect our houses of worship & religious centers.”

Also on Monday, the World Jewish Congress called for a “strong and decisive reaction by the authorities at all political levels to combat” antisemitism in the US.

“This is not merely a problem for the Jewish community, it’s a problem for America as a whole,” WJC President Ronald S. Lauder said in a statement. “It is equally important that political leaders in Washington and on the state and local levels speak out and condemn such vile acts. I know that President Trump and his administration will take all necessary steps on the federal level to address this problem.”

“It’s time for all good people in America to join forces in order to root out all forms of antisemitism, racism and bigotry,” Lauder concluded.

The Simon Wiesenthal Center on Tuesday urged US Attorney General Jeff Sessions to set up a special task force to catch the perpetrators of the JCC bomb threats.

Rabbis Marvin Hier and Abraham Cooper — the dean and associate dean of the Simon Wiesenthal Center — stated, “The multi-pronged threats of antisemitism today demand concerted action. We look to President Trump to take a leadership role in addressing the problem of antisemitism and hate in America head-on in a speech at a time and place of his choosing.”

“American Jewry,” they continued, “is being targeted by extremists from multiple sources: On our nation’s campuses, where incessant anti-Israel campaigns have created a climate of intimidation; in New York, home to the world’s largest Jewish community, which reports a spike in antisemitic incidents, and just this week, 100 headstones in a Jewish cemetery in Missouri were overturned. Further, social media is being deployed 24/7 by extremists to target and demonize individual Jews, entire communities, our faith and values. We need leadership from the top to effectively combat the hate.”

In a statement on Tuesday, Rabbis Denise L. Eger and Steven A. Fox — the president and chief executive of the Central Conference of American Rabbis — said, “We call upon the president and leaders of both parties to speak up forcefully against antisemitism and all forms of hatred based on religion, race, sex, sexual orientation, and gender identity, among others.”