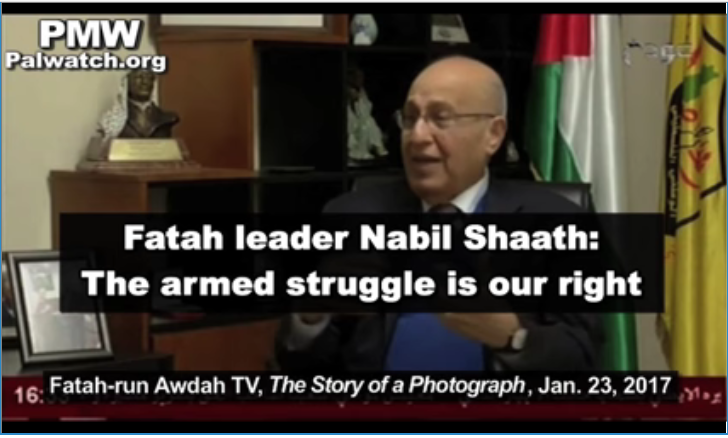 A senior official from Palestinian President Mahmoud Abbas’ Fatah party sanctioned “armed struggle” – a euphemism for terror – as the “indisputable” right of Palestinians in order to “liberate our homeland.”

“Our cause is just. Our right to the armed struggle is an indisputable right. The Israelis didn’t come here through negotiations. They did not come at our request. They are usurpers who came with weapons to murder and tried to expel [us],” Nabil Shaath said in an interview with Fatah-run Awdah TV last month, translated by Israeli monitoring group Palestinian Media Watch.

Shaath, who served as Palestinian Foreign Minister, called for the creation of a “Palestinian Arab democratic state” in which Jews, Muslims and Christians live together, thereby eliminating the Jewish state altogether.

“The [Israelis] succeeded in expelling a large part of our people by force. Therefore, our right to the armed struggle is indisputable,” Shaath said. “We are humane people. We want to liberate our homeland. After we liberate our homeland, we will have no problem with living in a democratic state in which Jews, Muslims and Christians live – in a Palestinian Arab democratic state.”

The Fatah official then told his Palestinian audience, “Your cause is just. You are occupied. Your land was stolen. Your rights were taken. Therefore, I’ve never seen any problem with carrying out the armed struggle while diplomatic and political activity supporting your cause is being carried out.”

Shaath’s justification for employing “armed struggle” is in direct violation of the PLO’s commitment to renounce violence. The PLO (with Fatah being the principle member) was removed from the list of terror organizations during the Oslo Accords when it committed to “ensure the immediate, efficient and effective handling of any incident involving a threat or act of terrorism, violence or incitement.”

Despite this, the PLO and PA continue to compensate terrorists and their families with a monthly salary. As Shaath confirmed in the interview, Fatah views the murder of Israeli civilians as legitimate “resistance.”

Earlier this month, Shaath called on the Palestinian Authority to create a united front with President Donald Trump’s opponents in the U.S., saying that Trump had “declared war on Islam.”

He further said that the Palestinians supported peace, but only “on condition” that Prime Minister Benjamin “Netanyahu and his soldiers and murderers and settlements will leave our land.”


Is Venezuela a State Sponsor of Terrorism? "We need to separate from the Palestinians inside pre-67 Israel"