(Vidéo) Nikki Haley : “I am here to emphasize that the United States is determined to stand up to the U.N.’s anti-Israel bias.” 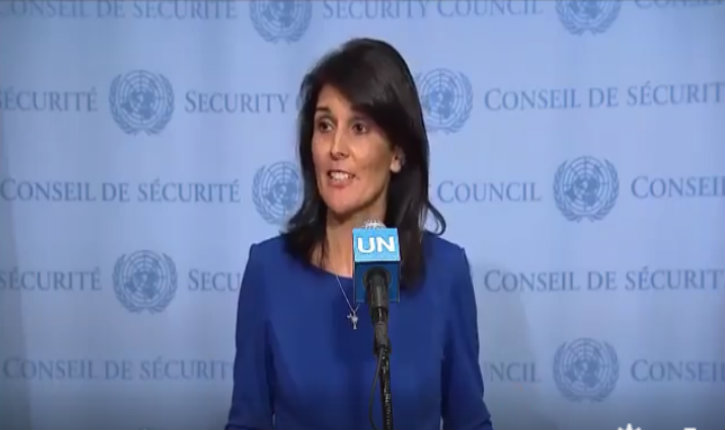 A star is born is our reaction to the first press briefing by President Trump’s new ambassador at the United Nations. The ex-governor of South Carolina was ridiculed by the Left when the president first sent her nomination up to the Hill, owing to her alleged lack of foreign policy chops. She certainly rang the wake up gong for that crowd this morning, after emerging from her first Security Council monthly meeting devoted to the Middle East. Tough as nails but with a smile and a layer of Southern charm.

The ambassador had just come from the regular monthly Security Council on Middle East issues. She said it was her first such meeting, and “it was a bit strange.” The Security Council, she said, is supposed to discuss how to maintain international peace and security. But the meeting, she said, was not about Hezbollah’s illegal buildup of rockets in Lebanon, it was not about the money and weapons Iran provides to terrorists, it was not how we defeat ISIS, it was not how we hold Beshar al-Assad accountable for the slaughter of thousands of civilians.

The ambassador made clear that the Trump administration will not support the kind of resolution from which the Obama administration’s ambassador — Samantha Power — shamefully abstained, though Mrs. Haley was too polite to name the humiliated Ms. Power. “The outrageously biased resolutions from the Security Council and the General Assembly only make peace harder to attain by discouraging one of the parties from going to the negotiating table.”

The ambassador warned that it is “the U.N.’s anti-Israel bias that is long overdue for change,” and said America will not hesitate to speak out in defense of its friend in Israel. All this was going on while the press was questioning President Trump on what he was going to do about anti-Semitism. If his ambassador to the world body is any example, the answer is plenty. She has the principles of a Daniel Patrick Moynihan, the grit of a John Bolton, and the star power of a Jeane Kirkpatrick, and in her first press briefing she certainly made her point.


Denver: Muslim who shot transit guard says he did it for the Islamic State, investigators say he didn’t In Sweden and the West, What Message Are We Muslims Sending?