The end of Palestine. Israel has the opportunity to reclaim its nation 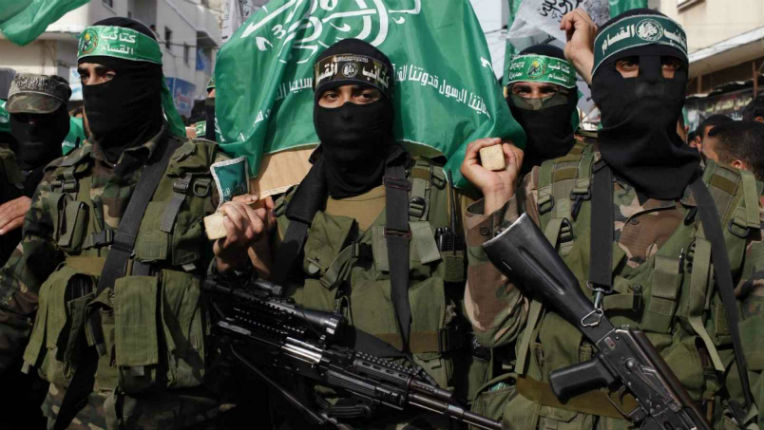 Israel has the opportunity to reclaim its nation.

Palestine is many things. A Roman name and a Cold War lie. Mostly it’s a justification for killing Jews.

Palestine was an old Saudi-Soviet scam which invented a fake nationality for the Arab clans who had invaded and colonized Israel. This big lie transformed the leftist and Islamist terrorists run by them into the liberators of an imaginary nation. Suddenly the efforts of the Muslim bloc and the Soviet bloc to destroy the Jewish State became an undertaking of sympathetically murderous underdogs.

But the Palestine lie is past its sell by date.

What we think of as “Palestinian” terrorism was a low-level conflict pursued by the Arab Socialist states in between their invasions of Israel. After several lost wars, the terrorism was all that remained. Egypt, Syria and the USSR threw in the towel on actually destroying Israel with tanks and jets, but funding terrorism was cheap and low-risk. And the rewards were disproportionate to the cost.

For less than the price of a single jet fighter, Islamic terrorists could strike deep inside Israel while isolating the Jewish State internationally with demands for “negotiations” and “statehood.”

After the Cold War ended, Russia was low on cash and the PLO’s Muslim sugar daddies were tired of paying for Arafat’s wife’s shoe collection and his keffiyah dry cleaning bills.

The terror group was on its last legs. “Palestine” was a dying delusion that didn’t have much of a future.

That’s when Bill Clinton and the flailing left-wing Israeli Labor Party which, unlike its British counterpart, had failed to adapt to the new economic boom, decided to rescue Arafat and create ”Palestine”.

The resulting terrorist disaster killed thousands, scarred two generations of Israelis, isolated the country and allowed Jerusalem, Tel Aviv and other major cities to come under fire for the first time since the major wars. No matter how often Israeli concessions were met with Islamic terrorism, nothing seemed able to shake loose the two-state solution monkey on Israel’s back. Destroying Israel, instantaneously or incrementally, had always been a small price to pay for maintaining the international order.

The same economic forces that were transforming the world after the Cold War had salvaged “Palestine”. Arafat had lost his sponsors in Moscow, but his new sugar daddy’s name was “Globalism”.

The Cold War had been the focus of international affairs. What replaced it was the conviction that a new world tied together by international commerce, the internet and international law would be born.

The demands of a clan in Hebron used to be able to hijack the attention of the world because the scope of the clash between Capitalism and Communism could globalize any local conflict. Globalization was just as insistent on taking local conflicts and making them the world’s business through its insistence that every place was connected. The terrorist blowing up an Israeli pizzeria affected stock prices in New York, the expansion prospects of a company in China and the risk of another terrorist attack in Paris. And interconnectedness, from airplane hijacking to plugging into the international’s left alliance of global protest movements, had become the  best weapon of Islamic terrorists.

But now globalization is dying. And its death may just take “Palestine” with it.

A new generation of leaders is rising who are actively hostile to globalization. Trump and Brexit were the most vocal rebukes to transnationalism. But polls suggest that they will not be the only ones. The US and the UK, once the vanguards of the international order, now have governments that are competitively seeking national advantages rather than relying on the ordered rules of the transnational safety net.

These governments will not just toss aside their commitment to a Palestinian state. Not when the Saudis, Qataris and countless other rich and powerful Muslim countries bring it up at every session.

But they will be less committed to it.

45% of Americans support the creation of a PLO state. 42% are opposed. That’s a near split. These historical numbers have to be viewed within the context of the larger changes sweeping the country.

The transnationalists actively believed that it was their job to solve the problems of other countries. Nationalists are concerned with how the problems of other countries directly impinge on them without resorting to the mystical interconnectedness of everything, from climate change to global justice, that is at the core of the transnational worldview.

More intense competition by Western nations may make it easier for Islamic agendas to gain influence through the old game of divide and conquer. Nations facing terrorism will still find that the economic influence of Islamic oil power will rally the Western trading partners of Islam against them.

But without the transnational order, such efforts will often amount to little more than lip service.

Endlessly pouring fortunes into a Palestinian state that will never exist just to keep Muslim oil tyrants happy is not unimaginable behavior even for a nationalist government. Japan has been doing just that.

But it will be a less popular approach for countries that don’t suffer from Japan’s energy insecurity.

Transnationalists are ideologically incapable of viewing a problem as unsolvable. Their faith in human progress through international law made it impossible for them to give up on the two-state solution.

Nationalist governments have a colder and harder view of human nature. They will not endlessly pour efforts and resources into a diplomatic black hole. They will eventually take “No” for an answer.

This won’t mean instantaneous smooth sailing for Israel. It will however mean that the exit is there.

For two decades, pledging allegiance to the two-state solution and its intent to create a deadly Islamic terror state inside Israel has been the price demanded of the Jewish State for its participation in the international community. That price will not immediately vanish. But it will become easier to negotiate.

The real change will be on the “Palestinian” side where a terrorist kleptoracy feeds off human misery in its mansions downwind of Ramallah. That terror state, conceived insincerely by the enemies of the West during the Cold War and sincerely brought into being by Western transnationalists after the Cold War ended, is a creature of that transnational order.

The “Palestinian Authority”, a shell company of the PLO which is a shell company of the Fatah terrorists, has no economy worth speaking of. It has foreign aid. Its diplomatic achievements are achieved for it by the transnational network of foreign diplomats, the UN, the media and assorted international NGOs. During the last round of “negotiations”, Secretary of State John Kerry even attempted to do the negotiating on behalf of the Palestinian Authority in the talks with Israel.

Take away the transnational order and the Palestinian Authority will need a new sugar daddy. The Saudis are better at promising money than actually delivering it. Russia may decide to take on the job. But it isn’t about to put in the money and resources that the PA has grown used to receiving from us.

Without significant American support, the Palestinian Authority will perish. And the farce will end.

It won’t happen overnight. But Israel now has the ability to make it happen if it is willing to take the risk of transforming a corrosive status quo into a conflict that will be more explosive in the short term, but more manageable in the long term.

Prime Minister Netanyahu, in stark contrast to rivals on the left like Peres and on the right like Sharon, is not a gambler. The peace process was a big gamble. As was the withdrawal from Lebanon and the expulsion from Gaza. These gambles failed and left behind scars and enduring crises.

Unlike the prime ministers before and after him, Netanyahu has made no big moves. Instead he serves as a sensible steward of a rising economy and a growing nation. He has stayed in office for so long because Israelis know that he won’t do anything crazy. That sensible stewardship, which infuriated Obama who accused him of refusing to take risks, has made him one of the longest serving leaders in Israeli history.

Netanyahu is also a former commando who participated in the rescue of a hijacked airplane. He doesn’t believe in taking foolish risks until he has his shot all lined up. But the time is coming when not taking a risk will be a bigger risk than taking a risk. Eventually he will have to roll the dice.

The new nationalist wave may not hold. The transnational order may return. Or the new wave may prove darker and more unpredictable. It’s even possible that something else may take its place.

The status quo, a weak Islamist-Socialist terror state in Ramallah supported by the United States, a rising Muslim Brotherhood terror state in Gaza backed by Qatar and Turkey, and an Israel using technological brilliance to manage the threat from both, is already unstable. It may collapse in a matter of years.

The PLO has inflicted a great deal of diplomatic damage on Israel and Hamas has terrorized its major cities. Together they form an existential threat that Israel has allowed to grow under the guise of managing it. The next few years may leave Israel with a deadlier and less predictable struggle.

“Palestine” is dying. Israel didn’t kill it. The fall of the transnational order did. The question is what will take its place. As the nationalist wave sweeps the West, Israel has the opportunity to reclaim its nation.

Daniel Greenfield, a Shillman Journalism Fellow at the Freedom Center, is a New York writer focusing on radical Islam.