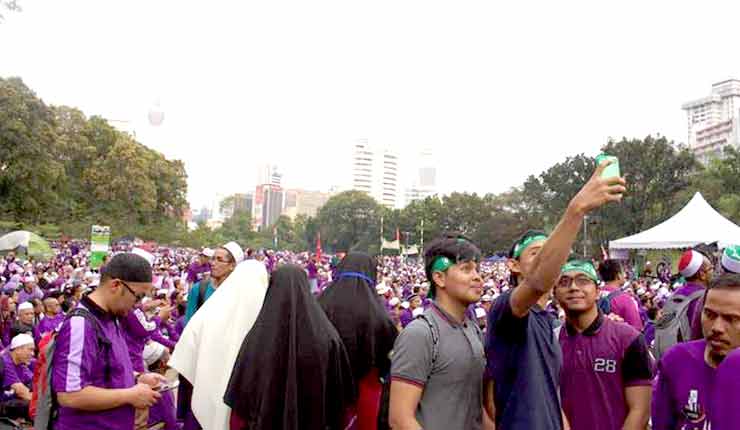 Kuala Lumpur – A massive rally in the heart of Kuala Lumpur in support of proposals to allow Islamic courts to impose more severe punishments has raised fears of growing division in Malaysia’s multicultural society.

The amendments to Act 355, expected to be discussed in parliament when it sits next month, will allow the Islamic courts, which rule on religious matters and family law for Muslims, to impose a jail sentence of as long as 30 years, as many as 100 strokes of the cane and a fine of more than $22,000.

Currently, the maximum punishments are a three-year jail term, six strokes of the cane and a fine of more than $1,100.

Saturday’s rally was mostly attended by supporters of the Pan-Malaysian Islamic Party (PAS), which is pushing the amendments, saying the changes will enhance the status of the Islamic courts and deter wrongdoing.

Critics of the amendments say they are unjust, disproportionate and unconstitutional.

While some were brought in by bus from PAS stronghold in the northeastern state of Kelantan, and neighbouring Terengganu, others came from Kuala Lumpur and the surrounding state of Selangor.

Many brought their children. Police estimated the crowd at about 20,000, while the local media put it at 50,000. PAS had said they expected to mobilise 200,000 people.

“[The amendments] are necessary to upgrade the Islamic laws,” said Shahrul Biden, a 40-year-old salesman and PAS supporter from Kuala Lumpur, who was among the crowd.

“As Muslims, we are obliged to follow the rule of law as laid down by God, Allah, no matter what.” 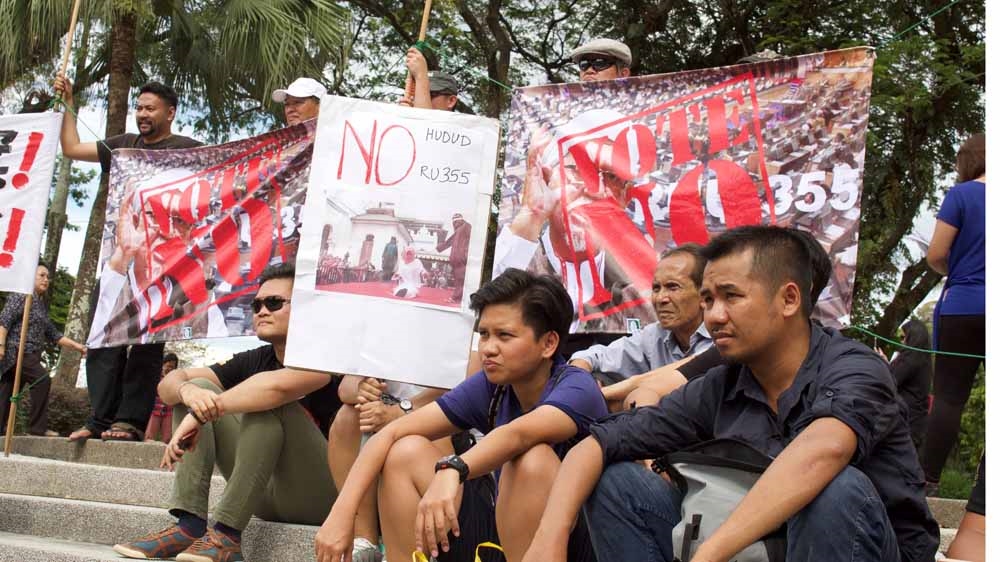 About 40 percent of Malaysia’s population is not Muslim, and the country has a dual legal system, with secular courts responsible for all civil and criminal matters.

United Malays National Organisation (UMNO), the party of Najib Razak, the Malaysian prime minister, which is giving tacit support to the PAS bill, governs in coalition with a number of race-based non-Muslim parties who have expressed their concern about the amendments.

Jamil Khir Baharom, the government minister responsible for Islamic affairs, spoke at the PAS rally after night fell, clad in purple like the rest of the demonstrators. Abdul Hadi Awang, PAS leader, was due to close the event.

At a rival rally, about 100 people gathered in a nearby suburb to protest against the plans, which they argue are not only incompatible with Malaysia’s multiethnic and multireligious society, but in breach of the country’s secular constitution.

An ethnic Chinese politician from one of the smaller parties in Najib’s coalition told the crowd he would resign if the amendments were passed.

Organisers said members of parliament from the Borneo state of Sarawak, which has a large Christian population, had informed them they would reject the proposals.

The opposition Democratic Action Party, which used to be in coalition with PAS, has reiterated it will reject the amendments; the version of the bill tabled last year led to the collapse of the opposition pact.

While Malaysia’s non-Muslims do not have jurisdiction in the Islamic courts, they have increasingly found themselves caught up in proceedings, particularly in cases of divorce – in Malaysia, non-Muslims must convert in order to marry a Muslim – or child conversion.

One case has been dragging on for nearly a decade, with a Hindu woman’s former husband, who converted to Islam and changed his children’s religion without seeking his wife’s consent, ignoring a civil court order to return his youngest child to her mother.

The religious bodies have also been accused of abusing their powers.

A Muslim married couple, who were accused of khalwat [close proximity of non-married people] by the religious police, is suing the Islamic authorities, claiming a breach of their rights under the constitution.

“This process of Islamisation should stop,” said Helen Ting, 53, who comes from Sarawak, but works near Kuala Lumpur and attended the rally against the amendments.

“We want to tell the government it’s time do a stock-take [and assess] the impact of this on our country – not just for the non-Muslims but the Muslims too.”


The end of Palestine. Israel has the opportunity to reclaim its nation Thousands Turn Out for Baghdad 'Silent Protest'