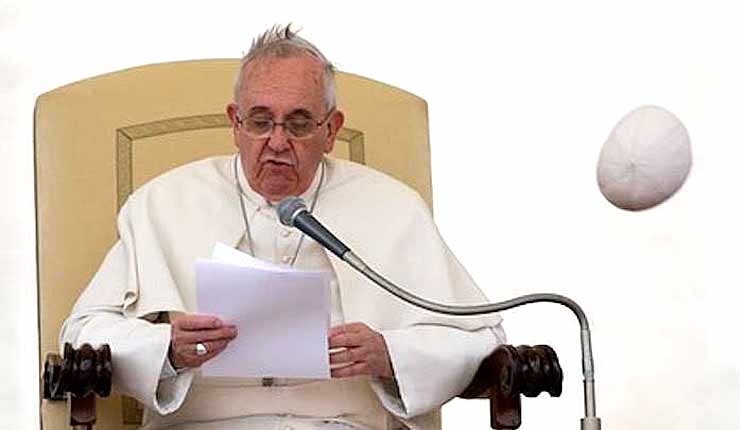 In an impassioned address Friday, Pope Francis denied the existence of Islamic terrorism, while simultaneously asserting that “the ecological crisis is real.”

What he apparently meant is that not all Christians are terrorists and not all Muslims are terrorists—a fact evident to all—yet his words also seemed to suggest that no specifically Islamic form of terrorism exists in the world, an assertion that stands in stark contradiction to established fact.

“No people is criminal or drug-trafficking or violent,” Francis said, while also suggesting—as he has on other occasions—that terrorism is primarily a result of economic inequalities rather than religious beliefs. “The poor and the poorer peoples are accused of violence yet, without equal opportunities, the different forms of aggression and conflict will find a fertile terrain for growth and will eventually explode.”

The Pope also reiterated his conviction that all religions promote peace and that the danger of violent radicalization exists equally in all religions.

“There are fundamentalist and violent individuals in all peoples and religions—and with intolerant generalizations they become stronger because they feed on hate and xenophobia,” he said.

While denying the existence of Islamic terrorism, Francis also seemed to condemn the denial of global warming, asserting that “the ecological crisis is real.”

“A very solid scientific consensus indicates that we are presently witnessing a disturbing warming of the climatic system,” he said.

We know “what happens when we deny science and disregard the voice of Nature,” the Pope said. “Let us not fall into denial. Time is running out. Let us act. I ask you again—all of you, people of all backgrounds including native people, pastors, political leaders—to defend Creation.”

While acknowledging that science is not “the only form of knowledge,” and that “science is not necessarily ‘neutral’” and often “conceals ideological views or economic interests,” he still insisted that people of good will should not oppose “scientific consensus” regarding global warming.

Leftist media like the liberal Guardian in the U.K. immediately politicized the speech, predictably claiming that the Pope was backing “anti-Trump protests,” despite the fact that the Pope himself denied such a claim, explicitly declaring that “I am not speaking of anyone in particular.”

“I am not speaking of anyone in particular, I am speaking of a social and political process that flourishes in many parts of the world and poses a grave danger for humanity,” he said.

Moreover, although the Guardian claimed that the Pope was “condemning populism,” in point of fact, he was speaking to populist movements and praised their commitment to democracy.

“The direction taken beyond this historic turning-point,” Francis said, “will depend on people’s involvement and participation and, largely, on yourselves, the popular movements.”

Nevertheless, the Vatican’s Secretary of State, Cardinal Pietro Parolin, said Monday that the Holy See is concerned over growing populist and nationalist movements, both in Europe and in the United States.

In an interview for the Italian evening news on the state-owned RAI network, the Cardinal was asked whether the Vatican is worried about what the interviewer called “the spread of nationalism and populism not only in Europe but also in the United States with Donald Trump.”

“I think so, I think so,” Parolin said. “Certainly these closings are not a good sign,” since many of them “are born of fear, which is not a good counselor.”

In his address Friday, the Pope denounced “the guise of what is politically correct or ideologically fashionable,” which he described as a “hypocritical attitude,” while urging real solutions to unemployment, corruption, the identity crisis, and “the gutting of democracies.”

“The system’s gangrene cannot be whitewashed forever because sooner or later the stench becomes too strong,” he said.

One thought on “Pope Francis: “Muslim terrorism does not exist””