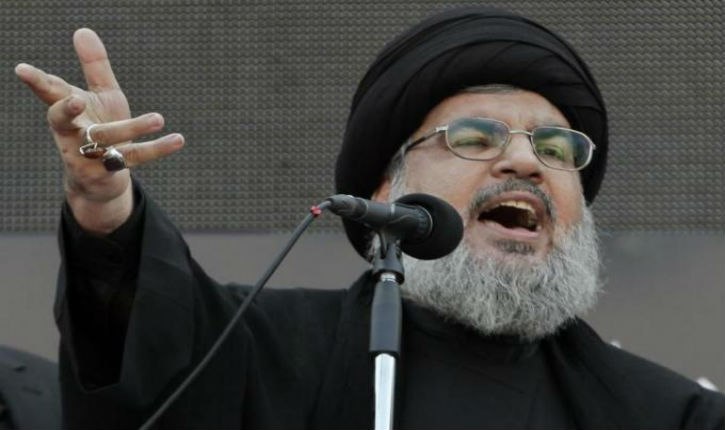 The chief of the Iran-backed terrorist group Hezbollah on Thursday threatened to attack Israel’s nuclear reactor in the southern city of Dimona.

“I call upon the Israelis not only to evacuate the ammonia tank from Haifa, but also to dismantle [the] Dimona nuclear facility,” Hassan Nasrallah said. “The Israeli nuclear weapon that represents a threat to the entire region, we will turn it into a threat to Israel.”

While Israel maintains a policy of nuclear ambiguity, having never admitted to or denied possessing nuclear weapons, international experts generally agree that it has at least 100 nuclear warheads.

On Sunday, an Israeli court ordered Haifa Chemicals to empty an ammonia tank at Haifa’s port. The move came a couple of weeks after a report by Prof. Ehud Keinan, a chemistry expert at the Technion-Israel Institute of Technology, warned that an attack on the ammonia tank would “cause a disaster whose effects could exceed that of the atom bombs dropped on Hiroshima and Nagasaki in World War II.” (The court’s injunction to empty the tank was later delayed after a petition by Haifa Chemicals.)

“The Israelis hurried to empty out its ammonia tank after our threat to target it, but we’ll reach it wherever they take it to,” Nasrallah warned. Last February, the Hezbollah leader also threatened to target the tank, saying, “This would be exactly as a nuclear bomb, and we can say that Lebanon today has a nuclear bomb, seeing as any rocket that might hit these tanks is capable of creating a nuclear bomb effect.”

Nasrallah delivered his speech on the 9th anniversary of the death of Imad Mughniyeh, Hezbollah’s former chief military commander. Mughniyeh was responsible for the deaths of hundreds of Americans and others on behalf of Iran, and masterminded the 1983 attack on the U.S. embassy and Marine barracks in Beirut, Lebanon.