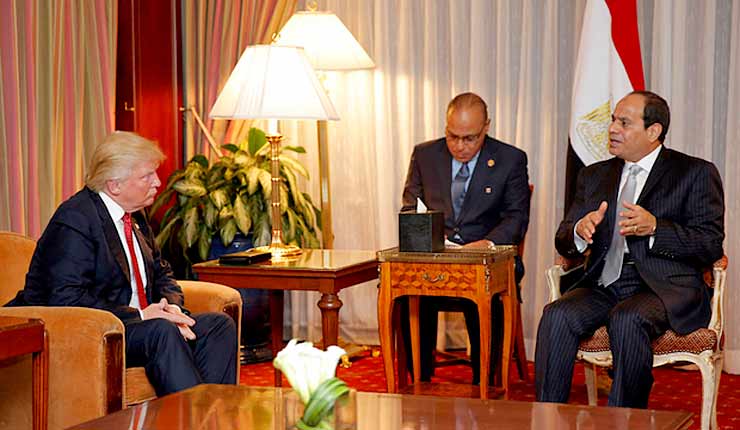 The Trump administration is in discussions about the formation of a regional Arab security alliance with Israel as a counterbalance to Iran’s influence in the Middle East, according to Arab officials.

The alliance would include Egypt and Jordan, both of whom recognise and have peace treaties with Israel, as well as Saudi Arabia and the United Arab Emirates, neither of whom recognise Israel but are known to have covertly shared intelligence in the past.

“They’ve been asking diplomatic missions in Washington if we’d be willing to join this force that has an Israeli component,” one Arab diplomat said, according to the Wall Street Journal.

“Israel’s role would likely be intelligence sharing, not training or boots on the ground. They’d provide intelligence and targets. That’s what the Israelis are good at.”

Speaking during a Wednesday joint news conference with the Israeli prime minister, Benjamin Netanyahu, Trump said the plan would potentially have an enormous impact on the balance of power in the Middle East, which is currently seeing a regional rivalry and proxy wars between Saudi Arabia and Iran.

“It is something that is very different, hasn’t been discussed before,” said Trump.

“And it’s actually a much bigger deal – much more important deal in a sense. It would take in many, many countries and would cover a very large territory.”

Netanyahu, who has previously boasted of the cooperation between Israel and the Gulf states, also praised the idea.

“I believe that the great opportunity for peace comes from a regional approach from involving our newfound Arab partners,” he said.

The effect of the agreement would be similar to the NATO alliance’s mutual defence policy, where there is a collective responsibility to respond if one member is attacked.

Such an alliance would prove controversial as, aside from the Gulf states not officially recognising Israel, the populations of those countries are resolutely pro-Palestinian.

However, another Arab official told the WSJ that the Trump administration could use the designation of the Muslim Brotherhood as a terrorist organisation – which the Egyptian government has already implemented – as an incentive for Egypt to join the alliance.

The officials added that the Trump administration had approached Egypt to host a combined force, but that Saudi Arabia was also keen to join. Any alliance would effectively expand upon the Saudi-led coalition that is currently waging a campaign of air strikes against the Houthi rebels in Yemen.

Though Trump has repeatedly said his government would be the most pro-Israel ever, he has recently stepped back from a promise to move the US embassy from Tel Aviv to Jerusalem, a move which would be illegal under international law.

According to the officials, this may be another concession to the Arab states in order to incentivise the creation of the regional alliance.

Major General Ahmed Asiri, a military adviser to Saudi Arabia’s defence ministry, refused to comment on the proposal to the WSJ.

“With Israel, we don’t have official relations,” he said.

However, he added that the “the Israelis are facing the same Iranian threat, exactly like us”.