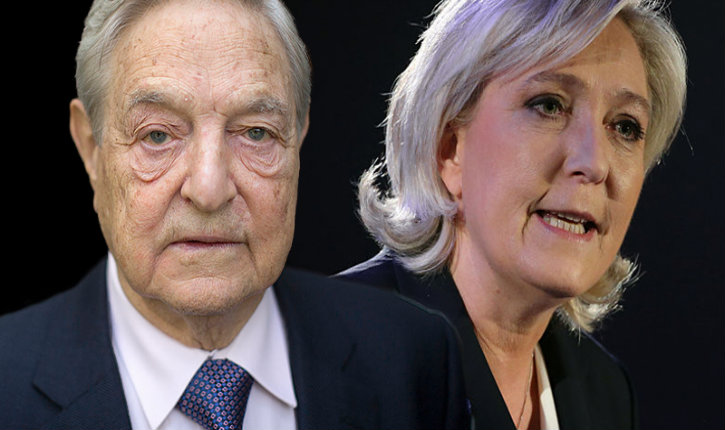 WASHINGTON, D.C. – Though largely not reported by the mainstream media, George Soros has invested in Google as it stepped up its “Fake News” campaign designed to depress the vote of anti-globalist Marine Le Pen, leading candidate of the conservative National Front (FN) party in the French presidential election scheduled for April 23.

Then, in the fourth quarter 2011, Soros bought his largest share in Google to date, purchasing 258,900 shares at about $592 per share for a total investment of $154 million.  Soros’ investment in Google in 2011 was made by Soros’ predecessor Quantum Fund, then the best-performing hedge fund in history that in 2011 was closed to the public, focusing only on managing assets held by Soros and his family.

Soros’ purchase of Google stock in 2011 made Google his fifth largest holding, totaling approximately 7.3 percent of his Quantum Fund portfolio.

Then, in the first quarter of 2013, Soros Fund Management LLC increase its position in Google once again.

In December 2016, in the wake of Hillary Clinton’s loss to Donald Trump, Soros’ Open Society Foundation, which had invested over $1 million to the campaign, joined Google investing between $50-100 thousand in the leftist Washington-based think-tank founded in 2003 by former Clinton campaign chair John Podesta.

On Dec. 15, 2016, the Daily Caller reported Neera Tanden, the president of the Center for American Progress, declared the goal of her organization is “to be the central hub of the Trump resistance and to hold Trump accountable for the promises he made.”

On Feb. 6, 2017, Google News Lab announced CrossCheck, a new “Fake News” project billed as a collaborative effort between journalists, newsrooms and social media companies that appears aimed at censorship so as to impede the chances of Le Pen of to win the French presidential election.

In a press release dated Feb. 6, 2017 Google announced from Paris a partnership between Google News Lab and First Draft to help “the French electorate make sense of what and who to trust in their social media feeds, web searches and general news consumption in the coming months.”

First Draft is a technology company, in part funded by Google News Lab in June 2015, with a purpose to monitor online news “to raise awareness and address challenges relating to trust and truth in the digital news.”

The Google News Lab press release also noted the CrossCheck project, in conjunction with Facebook’s Crowd Tangle would start by working with newsrooms across France to monitor news concerning the French election.

“With combined expertise from across media and technology, CrossCheck aims to ensure hoaxes, rumors and false claims are swiftly debunked, and misleading or confusing stories are accurately reported,” the Google News Lab press release noted.  “With the French presidential election approaching, journalists from across France and beyond will work together to find and verify content circulating publicly online, whether it is photographs, videos, memes, comment threads and news sites.”

“CrossCheck partners will make use of the collective reporting in their own articles, television programs and social media content.”

Infowars.com has previously reported that hard-left political activist David Brock, the founder of Media Matters and the father of “Fake News,” is working with co-conspirators Google and Facebook to implement a strategy designed to ban conservative and libertarian websites, including Infowars.com.

Infowars.com has also reported that in a briefing book written for prospective donors and intended to remain “confidential,” Brock bragged that he had targeted for media censorship Roger Stone, the long-time Donald Trump confident who has authored the current bestseller entitled Making of the President 2016.

In the briefing book, Brock bragged that a campaign executed by Media Matters and its paid troll minions had effectively blocked Stone from media appearances, reducing Stone’s effectiveness for Trump during the latter part of the 2016 presidential campaign – a Media Maters campaign that appears to have been extended to thwart Stone’s current media tour designed to promote his current bestseller.