Netanyahu at White House: “There is no Bigger supporter of Israel than Trump” 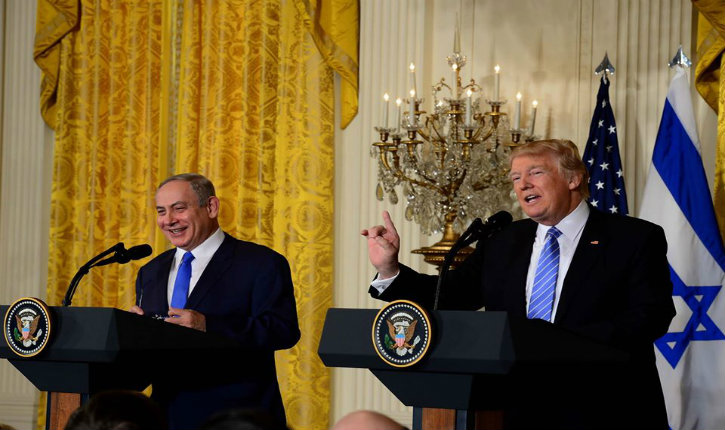 The Jerusalem Post reports: Prime Minister Benjamin Netanyahu and US President Donald Trump held their first press conference together on Wednesday. It is the first time the two leaders have met since Trump’s inauguration on January 20th.

During the White House press conference, the two discussed the creation of a peace deal between Israel and Palestinians and the potential for a two-state solution. Trump said that he’d “like to see [Netanyahu] hold off on settlements for a bit.” He also added that he thinks “we are going to make a deal,” to which Netanyahu responded “We’ll see.”

Netanyahu said at the end of the conference that “there is no bigger support of Israel and the Jewish State than President Donald Trump.”

The two men spoke in advance of a  meeting that lasted for several hours in which they discussed their policy positions on major issues in the region — Iran, Syria, ISIS and the Israeli-Palestinian conflict. It was their first face-to-face conversation since Trump’s January 20th inauguration and was different in tone and tenor from the contentious meetings Netanyahu had held with Trump’s predecessor, Barack Obama.

The affection between the two men was clear from the smiles and the warm handshake on the back. The two leaders whose relationship reaches back to the 1980s, both spoke of each other in admiring tones.

Trump explained that their strong ties gave him an advantage other US presidents had lacked, when it came to tackling the thorny issues with regard to the Israeli-Palestinian conflict.

“Bibi and I have known each other a long time,” said Trump adding that the Israeli leader was “smart and a great negotiator.”

As a result, he said, “I think we are going to make a deal.”

He said such a deal was personally important to him, and that he planned to work “very, very diligently” toward an agreement.

There were a few points of tension at the press conference with Trump asking Netanyahu to “hold back on settlements for a little bit” and noting that Israel would have to take steps for peace.

“Both sides will have to make compromises— you know that, right?,” Trump asked Netanyahu, who joked of Trump’s knowledge of the art of the deal.

“The Israelis are going to have to show some flexibility,” Trump said at a joint press conference. “And I think they’ll do that.”

Both men said that a deal would likely incorporate participation from the wider Arab world, which, for its part, insists peace will only come through the establishment of a Palestinian state.

Netanyahu repeated his belief that settlement activity is not core to the conflict. But he did acknowledge “it’s an issue,” and said he would work with Trump in meetings today on mechanisms to avoid repeated confrontations over construction.

While the two leaders seemed at odds on settlement activity and the viability of a peace process, both seemed in agreement on Iran, which they said was a focus of their consultations.

Next to a grinning Netanyahu, Trump repeated his criticism of the international agreement governing Iran’s nuclear program as the worst deal ever made. And the Israeli premier characterized Iran as the core of a scourge Trump has vowed to eliminate: Radical Islamic terrorism.

“You’ve shown great clarity and courage in confronting this challenge head on,” Netanyahu said, expressing concern with Iran’s ballistic missile program and the long term growth of its nuclear infrastructure in the out-years of the Joint Comprehensive Plan of Action.

The press conference was followed by meetings and a working lunch. Netanyahu will meet with congressional leadership this afternoon.