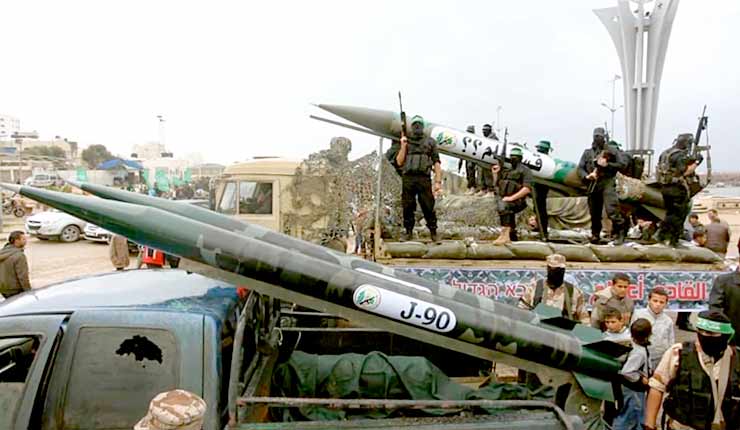 Francine Wolfisz chats to director Martin Himel about his new film, Eyeless in Gaza, which reveals how journalists are forced to tow the line.

Seasoned journalist Matti Friedman had noticed all was not as it should be at the Associated Press (AP) bureau in Gaza.

Hamas fighters had burst into the office and threatened staff over photographs they had published. Then they witnessed a rocket launch right beside their office, endangering the lives of staff and nearby residents – and yet AP did not report it.

Likewise, the news coverage failed to show how cameramen waiting outside Al-Shifa Hospital in Gaza City would film the arrival of civilian casualties, but at the behest of officials, would turn off the cameras when wounded and dead fighters turned up – an attempt to preserve the illusion that only Palestinian civilians were being targeted by Israel.

Of course the truth was far from that, but while Hamas took pains to control how journalists portrayed conflicts in the region, the world’s media instead turned its attention on Israel.

It was a situation that Martin Himel, a Middle East correspondent for 25 years, had also observed before coming to the troubling conclusion that Israel was always portrayed as the aggressor and the Palestinians as victims – or, as Friedman says: “A morality play starring a familiar villain.”

Curious to discover how this came to be the media’s viewpoint, Himel has interviewed combatants, civilians and politicians from both sides of the conflict for his provocative documentary, Eyeless In Gaza, which premieres in London later this month. Using the 2014 Gaza War as a starting point, the film features clips taken from media coverage at the time, and includes such sensationalist headlines  as: “Israel is targeting…hospitals”. As the documentary sets out to show, neither of these statements were accurate.

Himel, who divides his time between homes in Tel Aviv and New York, believes there has been “significant distortion” in such reports on Israel, but the real question is why.

“It’s something I call ‘group think’,” explains Himel.  “Group think isn’t a malicious attempt to lie or distort the truth, but there is a strong herd instinct of what is allowable and what is not.

“When you look at reporting on the Middle East in general, the same model is used. The Syrian conflict was described as a fight for human rights and the Arab Spring was hailed as a revolt against brutal dictators.

“What often happens is the group think will significantly distort what’s really going on when you are reporting something – and if you violate group think you can be in a lot of trouble.”

As a case in point, the film highlights the naval blockade and subsequent raid by Israeli forces on a Palestinian freighter named Karine A in 2007. The vessel was found to be carrying 50 tons of weapons, including short-range Katyusha rockets, anti-tank missiles and explosives.

But as the documentary notes: “Very little of the weapons found…made it to the media. Instead, the news focused on flotillas trying to break the naval blockade.”

Why, then, did journalists focus more on the flotillas than the success of the Karine A operation? Himel explains: “The group think is that an unjustified blockade is causing hardship for the people of Gaza. They can’t get basic food, they can’t move around, they can’t get to family in other places. The media will be attracted to things that strengthen that assumption.

“So a flotilla coming in trying to save the besieged people of Gaza, like those besieged in Leningrad in 1942, is appropriate, whereas if you are talking about a naval blockade that’s stopping arms getting in, you are instantly making the picture more complex – and that doesn’t sit well with editors.”

The consequences for journalists who veered away from the accepted narrative can be extreme.

When RTV reporter Harry Fear tweeted that Gaza rockets had fired into Israel, he was immediately expelled from the area by Hamas officials, while Palestinian journalist Ayman al-Aloul was imprisoned and tortured for being critical about the governing authority in Gaza.

“You pay the price,” says Himel.

There is, however, also another element, which Himel believes underscores the very reasons why the Israel-Gaza conflict is reported in the way it is.

“The real story is there’s a really serious war of beliefs going on, that’s the basis for all of it.

“But editors don’t want to say it, because that means it’s a religious war and you begin to realise how sensitive and complex the whole issue is.”

That decision not to report the conflict as one based on religion has also effectively blocked out mention of Hamas and its anti-Semitic ethos. Censored: Eyeless in Gaza claims Hamas tries to control how the Israel-Palestine conflict is portrayed

“Look at the amount of effort going in to show Donald Trump as an Islamophobic racist – not even a thousandth of that effort is going to show these Islamic groups, particularly Hamas, are anti-Semitic. Now why isn’t that covered? After all, if we labelled Hamas overtly as a racist, fanatic, anti-Semitic militia, the coverage would be very different.”

While not offering a fix to the problem, Himel does suggest that people can’t just rely on one news source to find the truth of a story.

“The idea of objectivity, that was very sacrosanct in journalism 50 years ago, is basically gone. Everything is from a point of view today, so you can’t just rely on one source – even if it is an established source.”


Netanyahu at White House: "There is no Bigger supporter of Israel than Trump" Iran Grabs the Reins in Gaza