100,000 Hindus rally against the Jihadis in Kolkata, say Donald Trump vindicates them 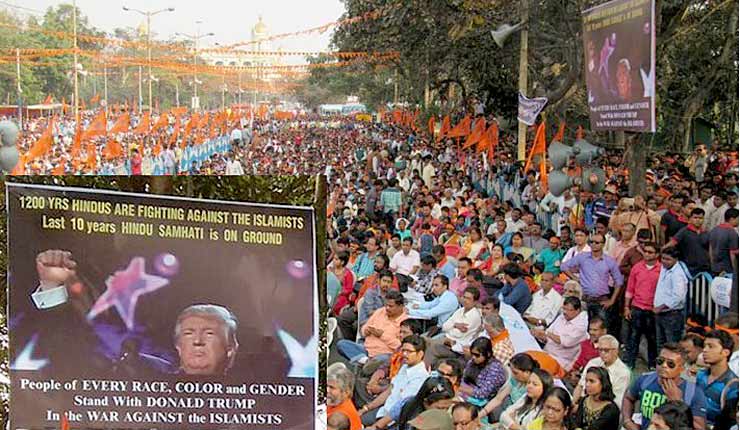 Kolkata: In a major show of strength against Islamic Terrorism, around 1,00,000 Hindus of all race, color and gender marched and rallied through the streets of Kolkata in the state of West Bengal, India. On the occasion of the Foundation Day of the organization Hindu Samhati, the organizers recalled the sufferings of the Hindu community worldwide. Founded in 2008, Hindu Samhati is a Hindu organization working on ground in West Bengal and in the other states of Eastern India.

In recent years there is a tremendous growth of Radical Islam in the Eastern part of India. There has been a series of attacks on the Hindu community. According to Tapan Ghosh, President and Founder of Hindu Samhati, who is also a Monk, “In 2016 attack against the Hindu community started with the burning of the Kaliachak Police Station of Malda by the Islamic Radicals (on 3rd of January). It ended with the misery of the Hindus in Dhulagarh in Howrah (on 14th December). In between these two incidents, Hindus of Bengal had to witness countless episodes of gruesome attacks and Jihadi atrocities throughout this year. Kaligram, Ramganz, Ilambazar, Tufanganz, Chopra, Naihati, Kharagpur, Shankrail, Mallarpur, Baduria, Mohammadbazar, Barchandghar, Jalangee, Toltoli and many more places observed similar occurrences. The sheer volumes of these events, the limitless atrocities and unparalleled aggression have become the eye-openers for the Hindus. The persecuted people in Eastern India are seeing the organization as their only hope”.

Devdutta Maji , Vice President of the organization said, “Hindu Samhati is about to complete its 9th year. It will be ten years old next February 14. It was precisely this tenth year (10 years 8 months), when our Lord Shri Krishna left for Mathura after concluding the Vrindaban chapter of his mortal life. We do not consider this kind of events as only a casual affair in His life; rather we regard these as one of the integral parts of His course of life. As Arjunas to Krishna we have all taken solemn vow to stop the Islamists in their march. Based on our 1400 years of Hindu resistance and sacrifice against the Islamists, we have founded Hindu Samhati. Donald Trump’s elevation to President and the recognition in America and the Western World regarding the threats posed by the Islamists to Humanity, vindicates what we have been saying for the last 9 years on behalf of Hindu Samhati. We appeal to world leaders to come together and wipe out the menace once and for all.

On the 14th of February every year, Hindu Samhati analyses previous year’s efforts and resolves for the upcoming year. This day has been transformed into a Day of Hindu Resistance and Hindu Resolve. People from Bharat and throughout the world arrive on this day to bless the Hindu Samhati volunteers. This mammoth rally is a tribute to the dedication of our volunteers on ground”.

The meeting was attended by Hindu activists from different parts of India and including the United States. Prasad Yalamanchi who came all the way from United States to join the event, recalled the role of the Hindus from Bengal in the Freedom Struggle of India. “Hindus from West Bengal, writers, activists , intellectuals, entrepreneurs, monks and sages like Vivekananda had all come together to serve India and help it attain freedom. They inspired generations. At a time when the world is seeking freedom from the Islamic fundamentalists, we see Hindu Samhati playing the same role”. Another activist Satya Dosapati, who along with Arvind Kumar had played a major role in the Trump campaign said, “When we hear the atrocities against Hindus in West Bengal, from America we feel helpless. However an organization like Hindu Samhati gives tremendous hope. The way police is being beaten up, being killed, I.P.S officers are being beaten up in Kolkata Maidan, thana (police station) after thana is being reduced to ashes, police totally helpless, and Hindus are anyway being beaten up and killed – seeing all these, we feel the tremendous need for a organization who can work on ground in West Bengal. Hindu Samhati which banks on courage, strength, pro-activeness and action of the Hindu community in West Bengal is make a significant difference on ground.”

The Chief Guest of the rally was R.S.N Singh, ex-officer of Military Intelligence and RAW, India’s premier Intelligence Agency. He recalled the severe threat that India was facing from the rise of Islamic Radicals in West Bengal. Hindu Samhati’s 14th February he said should be a National event where Hindus, Sikhs, Buddhists and other persecuted communities throughout India must come together to show their solidarity for the Hindus of Bengal. He said he was deeply impressed by Hindu Samhati’s work on ground and that compelled him to attend this rally. Ajay Chrungoo, Chairman Panun Kashmir also spoke about the need for Hindus to come together and the need to help the Kashmiri Hindus re-establish their homeland. Kashmiri Hindus he mentioned have been living in refugee camps after being thrown out of Kashmir for the last three decades. None of them have turned to militancy, but still believe that they will one day return back to Kashmir.

Other speakers included Hindu Monks Swami Pradiptanandaji and Swami Tejeswanandaji spoke on the occasion. Advocate Joydeep Mukherjee of A.I. Legal Aid could not attend but sent his video message. Debtanu Bhattacharya , Secretary of Hindu Samhati recalled , “Hindu Samhati is not just an apolitical Hindu organization, but is a movement which promotes absolute Hindu brotherhood. It has large number of women and men in its fold , resisting the aggressive and expansionist Islamists. Based on its work on ground, Hindu Samhati has instilled so much trust among Hindus today that Hindus from neighboring states are also showing interest. Hindu dignity and existence is threatened in every state in Eastern Bharat. We have to respond to that call of duty. Hence Samhati work has started even in Jharkhand and Assam. Next it will start in Bihar soon.”

Organizers informed that more than a dozen of Hindu Samhati workers were seriously injured by the attacks led by Jihadi Muslims supporting the ruling party TMC at 5 places. They are now hospitalized. About 6-7 vehicles carrying the participants were severely damaged in these attacks. Mamata Bannerji’s administration in recent times has totally failed to stand up to the Islamists. Thanks to her extreme Muslim appeasement and toothless administration, many feel that the Jihadis think that they have got full license to attack the common Hindus and Hindu activists.

Also with beheading of Hindus being very common nowadays in neighboring Bangladesh with which the state of West Bengal in India shares a porous border, and with regular reports of stringent Sharia Law being in place in many parts of rural West Bengal, where schools for women have been banned, entertainment like television sets have been banned and there is a mushrooming of Madrassas, members of the Muslim community joining the Islamic State, it remains to be seen what impact Hindu Samhati can play in the coming days. While the organization sees itself as part of the global movement against the Islamists, the tremendous size of the rally proves beyond doubt that it has ground support and is a force to recall with in the eastern part of India.

One thought on “100,000 Hindus rally against the Jihadis in Kolkata, say Donald Trump vindicates them”