The alt-left’s cyber jihad against Trump and his supporters 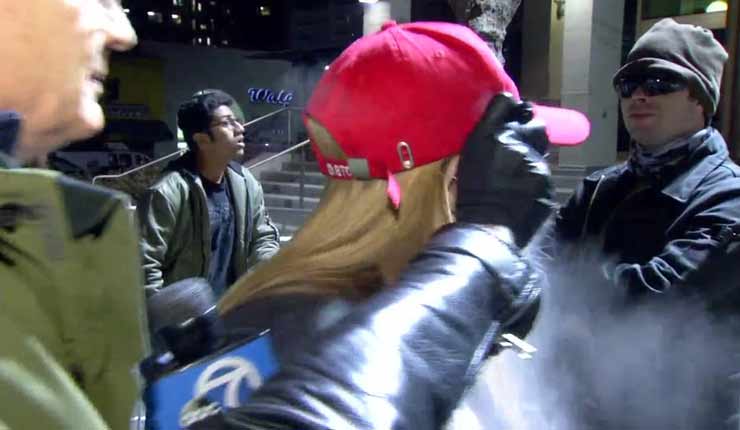 On Wednesday night, an Afghan-American software engineer and self-described “global geek girl” videotaped her friend Kiara Robles as a local TV reporter interviewed Robles about the raucous protests at University of California Berkeley that canceled a speech by controversial Breitbart editor Milo Yiannopoulos. Robles wore the trademark red hat of the Trump presidential campaign, only with the message, “Make BitCoin Great Again,” her straight, long blond hair sweeping out from under the cap.

Suddenly, a masked attacker in a leather jacket lunged at Robles and doused her face in stinging pepper spray. “My friend was giving an interview when some coward peppersprayed her,” Robles’s friend wrote on Twitter, posting the video. She was maced, too. (She said the attacker was a woman.)

Alas, her friend’s attacker wasn’t just “some coward.” The attacker was emblematic of a new toxic movement that is acting like an insurgency in America: the new alt-left.

For all of the important, albeit hyperbolic, conversations about “white supremacists” and the “alt-right,” we would be well served to confront the very real reality of a dangerous dynamic of liberals in an “honor brigade”who lash out aggressively at others with the false claim they are defending the “honor” of American values of tolerance, diversity and pluralism. For the self-confessed crime of my vote for Donald Trump, a liberal Georgetown University professor told me, “I’ve written you off as a human being,” and hurled insult after insult at me, including “F–k off. Go to hell,” and “Gloves off.”

For many, the protests at UC Berekely came out of the blue. The Socialist Alternative Bay Area, an organization of left-wing activists in the San Francisco Bay area, and the Berkeley Socialist Students had posted an innocuous Facebook “event,” inviting protesters to the campus Student Union to “unite against oppression” and “racists, Islamophobes and misogynists” who are “emboldened” by the “election of Donald Trump.”

“We have to shut them down,” the invitation read, ominously.

A Facebook user then shared the details with the hashtag #ShutDownMilo.

But, underscoring how social media is used not only by terrorists but by “social justice warriors” as well, the violent protests were long ago predicted.

Eric Feinberg, founder of GiPEC, a New York-based cyber intelligence company, tracked a first use of #ShutDownMilo to two months ago from the Twitter handle for a self-described “revolutionary anarchist news website,” ItsGoingDown.org, or IGD. The site says it seeks to “uplift and build capacity for a wide range of social struggles, movements, and revolutionary groups”; of course, it “accepts monetary donation via the anonymous digital currency bitcoin and … through regular Credit or Debit Card / PayPal.”

Says Feinberg: “This is the American intifada,” an Arabic word for an uprising. “Just like ISIS and Hamas have found the use of unique hashtags on social media to recruit and radicalize, unique hashtags are now being used by groups here in the U.S. that call for violence, protest, resistance and anarchy. By the use of these unique hashtags with a call to action to a specified group and location, the online mob becomes a real world-mob that can cause damage, disruption and violence, like we just witnessed in Berkeley.”

We are facing a cyber jihad, the Arabic word for “struggle,” in America, with the Internet used to mobilize mobs.

In Berkeley, protesters slammed Robles and her friends against a barricade. Unable to breathe or see from the pepper spray, rioters surrounded her, some of her friends getting stomped on. “I thought I was going to die,” Robles, who is gay, told me.

One call to action says “come out, mask up….” Another: “Smash Trump,”with a masked avenger punching Trump in the back of the head. There are yet more tip sheets for “combative resistance movements” and “black bloc tactics,” an “anarchist tradition” in which rioters appear in “black clothing and masks,” with layers of clothing to strip into to conceal identities, and “engage in some level of illegal activity.”

When I asked the group, via email, about its role in protests, it responded: “IGD is a news website, we are not organizers of, nor located in, Berkeley.”

“#Antifa came through on their promise to #ShutMiloDown at UC #Berkeley. “#miloatcal,” it wrote at 10:09 p.m.

It bragged about destruction of ATM machines, windows at an Amazon Prime store and the image of a man, facedown on the street, surrounded by a mob, with the message, “Greetings from Berkeley” and the hashtag, #keeppunchingnazis.

The school said in a statement “about 150 outside masked agitators” caused the violence that night.

Another #antifa #ShutMiloDown tweet showed knives at the necks of Trump supporters in red hats. Yet another one had a red Trump hat, burning on a stake.

When I asked IndyBay, via Facebook, who led the violence, it responded, “Milo, Steve, & Donald,” referring to Yiannopoulos, Trump chief strategist Steve Bannon and Trump.

In fact, while the Trump administration must of, course, lead from a place of compassion and moderation, intolerant tolerance-loving people are threatening the very safety of Americans, fomented by irresponsible Democratic Party leaders who refuse to accept the election results of 2016, fear-mongering “social justice warriors” who behave as if they are on the set of the “Hunger Games,” the movie about a “resistance” against a tyrannical dictator, and reckless social media outlets, media companies and alt-left “fake news” sites that amplify the “agit prop,” or agitation propaganda, of these political leaders and activists.

And who stands on the frontlines? Police officers, some of whom jumped barricades last night in UC Berkeley.

Dallas police officer Sgt. Demetrick Pennie, president of the Dallas Fallen Officer Foundation, and a plaintiff in a lawsuit regarding cyber agitation against police said: “These radical protests are creating a dangerous precedent for homeland security in this country. Not only are they facilitating the widespread manipulation of people using radical ideologies, but they are also laying the framework for a domestic terrorist attack of immense proportions to occur. From a critical incident management standpoint, these protest are too large and unpredictable for police to control, which creates an opportunity for a domestic terrorist to intercede and carry out an attack that could potentially result in mass casualties; a terror that would shock the nation similar to 9/11.”

He added: “As we have seen over the last two years, these protests have become more violent and radical in nature, which has placed police officers lives at risk. It is now time that law enforcement be given the legal authority and resources to quell these protests before they destroy this country.”

As the young women in the pepper spray incident nursed their wounds last night, @OccupyOakland posted a message at 11:14 p.m., stating, “We won this night. We will control the streets. We will liberate the land. We will fight fascists.  We will dismantle the state,” attaching a photo of protesters, carrying a banner with the battle cry, “THIS IS WAR.”

Republican leadership need to remember the lessons of “COIN,” or “countering insurgency,” from Afghanistan and Iraq: the best way to defeat an insurgency is good governance.

Appropriately, Trump responded this morning with the following tweet: “If U.C. Berkeley does not allow free speech and practices violence on innocent people with a different point of view – NO FEDERAL FUNDS?” And across the country, there were calls for the U.S. to designate #Antifa and a related group, #BlackBloc, as domestic terrorist organizations — a wise recommendation, by my analysis.

It’s time that the people of our country — including Democratic leadership — refuse the dangerous rhetoric of #TheResistance, advocate with civility for the policies we seek and live with a higher value in our hearts: #peace.

Asra Q. Nomani is a former Wall Street Journal reporter and the author of “Standing Alone: An American Woman’s Struggle for the Soul of Islam” (HarperOne). She is a co-founder of the Muslim Reform Movement and a former professor of journalism at Georgetown University. She can be reached at [email protected] and @asranomani.