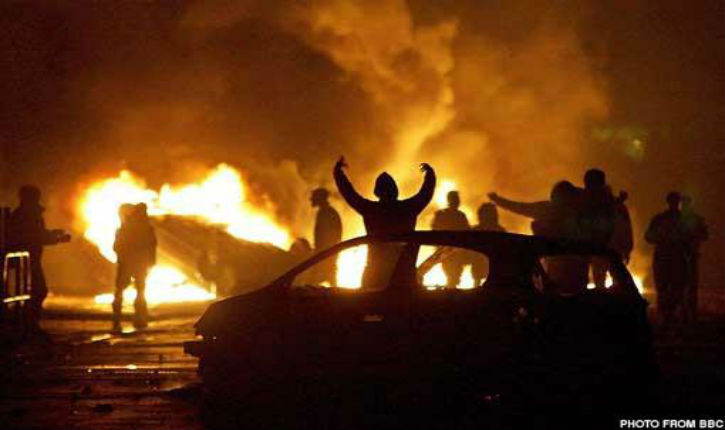 What started as a peaceful protest in the suburb of Bobigny descended into anarchy as some protesters set buildings and vehicles on fire.

VIOLENCE broke out as protesters torched cars and threw projectiles at cops in a Paris suburb over the alleged rape of a black man in police custody.

Peaceful demonstrations in Bobigny earlier today calling for justice for the 22-year-old descended into anarchy.

Shocking footage shows man limping after he was allegedly sodomised wth a batonThe youth worker, named as Theo, was allegedly raped with a police truncheon – sparking riots throughout last week in Paris – after he was arrested by four police officers on a housing estate on Thursday February 2.

Theo who claimed he “thought he was going to die” remains in hospital where he has been visited by French Prime Minister Francois Hollande.

The nation has been gripped with tension over claims police are routinely mistreating poor immigrant communities.

Around 2,000 people demonstrated again on Saturday by the courthouse in the northeast Paris suburb, waving banners reading “police rapes” and “police kills innocents”.

Ouleye Goudiaby, a 32-year-old restaurateur from Villeparisis, Seine-et-Marne, told Le Monde: “We are all revolted.

“These acts of police violence against young people in the working-class neighbourhoods are repeated again and again.

“Theo had the courage to denounce it but many dare not say anything.”

The mood turned dramatically when a van belonging to RTL radio station was set on fire.

According to RTL, a minority of between 100 and 200 masked individuals began attacked the security forces.

Cops dressed in riot gear were forced to use tear gas to calm the furious protesters who have reportedly torched up to four vehicles, along with garbage cans and shopping trolleys,

A small supermarket was also ransacked with food and drinks left strewn across the floor as the rioters ran amok.

Many protesters did not support the violence including one sports coach who told Le Monde it gives a “real bad image of us”.

Theo himself has called for calm and has urged residents “not to go to war”.