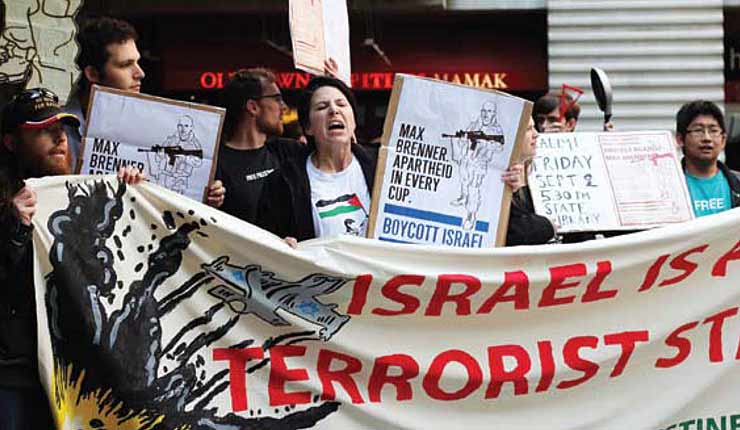 “You IDF soldiers don’t rape Palestinians because Israelis are so racist and disgusted by them that you won’t touch them.”

Hen Mazzig had been a member of Israel’s most left-wing party. But that didn’t prepare him for the sheer level of Israelaphobic craziness that he would encounter on campuses in the Pacific Northwest.

This year, from January through May, I went to college campuses, high schools, and churches to tell people about the history of modern Israel, about my experience growing up in the Jewish state, and about my family. I also always spoke about my military service as an officer in an IDF COGAT unit that attends to the needs of Palestinian civilians who are not involved in the conflict and promotes Palestinian civil society.

That went about as well as expected. Especially when BDS was involved. BDS rhetoric makes Nazi rhetoric look sensible and reasonable because it taps into whatever dementia is in the air.

At a BDS event in Portland, a professor from a Seattle university told the assembled crowd that the Jews of Israel have no national rights and should be forced out of the country. When I asked, “Where do you want them to go?” she calmly answered, “I don’t care. I don’t care if they don’t have any place else to go. They should not be there.”

When I responded that she was calling for ethnic cleansing, both she and her supporters denied it.

And during a presentation in Seattle, I spoke about my longing for peace between Israel and the Palestinians. When I was done, a woman in her 60’s stood up and yelled at me, “You are worse than the Nazis. You are just like the Nazi youth!”

A number of times I was repeatedly accused of being a killer, though I have never hurt anyone in my life.

On other occasions, anti-Israel activists called me a rapist. The claims go beyond being absurd – in one case, a professor asked me if I knew how many Palestinians have been raped by IDF forces. I answered that as far as I knew, none.

She triumphantly responded that I was right, because, she said, “You IDF soldiers don’t rape Palestinians because Israelis are so racist and disgusted by them that you won’t touch them.”

You’re a rapist? You’re not a rapist? Why do you hate Palestinian Arab women? Why won’t you rape them? You’re a racist!

Hen Mazzig blames American Jews for not being more vocal, but this particular piece of crazy actually originates from left-wing academics in his own country.

According to Dr. Gurevitch, This was a very serious paper that asked two important questions: Is the relative lack of IDF rapes a noteworthy phenomenon, and if so, why is it that there are so few IDF rapes when in similar situations around the world, where rape is so much more common?

The abstract of the paper, authored by doctoral candidate Nitzan, could not find instances of rapes of Palestinian women by the IDF it sought to find, so it was decided that the paper show that “the lack of organized military rape is an alternate way of realizing [particular] political goals.” It continues, “In the Israeli-Palestinian conflict, it can be seen that the lack of military rape merely strengthens the ethnic boundaries and clarifies the inter-ethnic differences – just as organized military rape would have done.”

Ergo, Nitzan could not find any cases of rape by IDF soldiers of Palestinian women even though Palestinian media constantly accuses Israeli soldiers of this. Apparently distraught over such findings, Nitzan had to twist her thesis to attribute the lack of such rapes to a governmental program instilling in IDF soldiers that the Arab women are sub-human or inferior.

This demented Catch 22 lunacy, or Reverse Rapism, as some have called it, won an award at Hebrew University. The people who endorsed it were likely to have been Meretz members or at least sympathetic to its position.

Tal Nitzan has since compared the media and internet criticism of her “Israeli Soldiers are Racist for not Raping” to… being raped.

“Media(ted) rape as a terror-inducing method

“From my distanced position in Canada, the public responses to my thesis seemed in a way similar. Obviously the effect on my life was not even remotely similar to the physical and mental suffering these women and their relatives went through, yet the mechanism used and the cultural logic behind it were quite similar.

“A crowd of self-appointed state representatives, joined by a mob of concerned, patriotic citizens gathered to defame my problematic character and disturbed personality. Yet this wasn’t enough. A body had to be dragged into the main square. It was examined, evaluated, mocked, ridiculed and then publicly and repeatedly raped as a combined act of punishing me and terrorizing others.

“Modern technology allows public events to be seen beyond the traditional spatial and temporal limitations… Hundreds of people, maybe more, gathered to defame me and my work… as an external distanced observer I could see the terrorizing and disciplining message it sent feminists, left-wing supporters and society as a whole.”

Tal Nitzan’s brand of anti-Israel crazy apparently percolated throughout academia and confronted Hen Mazzig. The whole thing is an example of how the international left works together to demonize Israel.

But there is good news for Israeli leftists. Muslim Arabs in the West Bank are far less racist than Israeli Jews and far more willing to rape despite ethnic differences.

One activist, who in the past used to frequent the protests in the West Bank but no longer participates, told Haaretz, “Two years ago we had a meeting of women who took part in the struggle against the occupation. It took place in an apartment in Jerusalem, and disturbing things were brought up. Nearly all the women that attended told of cases of harassment or discrimination.

This correspondence, along with other testimonies obtained by Haaretz, tells of a wider phenomenon of sexual harassment and assault of Israeli and foreign protesters in the West Bank. In the past two years, at least six incidents were recorded in the West Bank and East Jerusalem: two in Sheikh Jarrah, four more in the Mount Hebron area, in Masra, in Kfar a-Dik, and an alleged case of attempted rape in Umm Salmona, near Bethlehem, that was revealed in Haaretz.

Recently, a special forum was started by a group of women from leftist groups for the purpose of dealing and monitoring such incidents.

Israeli leftists should welcome these acts of tolerance. And this call by an Egyptian female lawyer to sexually harass Jewish women as an act of resistance.

Interviewer: Egyptian lawyer Nagla Al-Imam has proposed that young Arab men should sexually harass Israeli girls wherever they may be and using any possible method, as a new means in the resistance against Israel.

Nagla Al-Imam: First of all, they violate our rights, and they “rape” the land. Few things are as grave as the rape of land. In my view, this is a new form of resistance.

Interviewer: As a lawyer, don’t you think this might expose Arab youth to punishment for violating laws against sexual harassment?

I’m sure Judith Butler is writing up an enthusiastic call for involving the LGBT community in this new daring form of anti-racist activism.