No, Muslim Refugees Are Not Jewish WWII Refugees. Here Are 5 Reasons Why 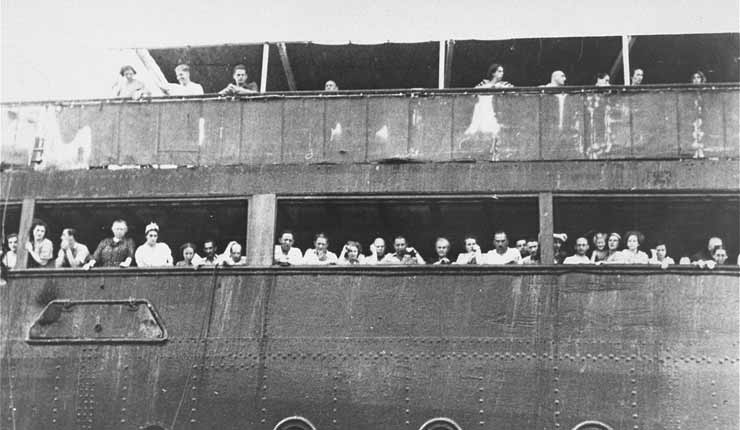 In a desperately misguided attempt to placate the palpable fear of allowing thousands of Muslim refugees into United States without proper security screenings just days after an Islamic terrorist attack, several left-leaning media outlets have fallen back on comparing the Jewish refugees fleeing the Holocaust to Muslim refugees fleeing a chaotic Middle East.

The false analogy is incredibly offensive, not only to the victims of the Holocaust but history itself. Here are 5 reasons why Muslim refugees are not Jewish WWII refugees:

As an ethno-religious group, Jews suffered tremendously under the genocidal programs of Nazi Germany. The West’s resistance to absorbing refugees was not informed by the actions of Jews themselves, but rather pre-existing isolationist policies developed as a consequence of WWI. The residue of European anti-Semitism may have been a factor as well.

In contrast, the threat of Islamic terror is self-evident. The litany of attacks against Western assets by Muslim fanatics cannot be overlooked.

“Jews who came to America were not themselves violent.  They did not strap bombs on themselves and blow themselves up in theaters; they did not go into restaurants and execute diners, one by one,” notes American Thinker, adding, “they did not attempt to set up a caliphate wherever they moved to, although they did tend to dominate the deli, bagel-making, and stand-up comedy fields.”

Arab states have been notoriously resistant and outright hostile when confronted with an influx of Muslim refugees at their gates. “There are at least two dozen Muslim countries, many of them wealthy gulf states, who could easily afford to take in refugees.  During the Holocaust, there was no Jewish state that could take in Jews.  That’s a big difference,” asserts American Thinker.

At the time, there was no Jewish state of Israel or safe havens for Jews to flee to. Today, there are scores of Muslim-majority states and even Islamic theocracies that celebrate religious brotherhood with hypocritical zeal.  Relatively stable Arab states even exploit the grievances of Muslim refugees from neighboring failed Arab states to deflect attention from human rights abuses at home.

Arab autocrats are heavily invested in the perpetuation of Muslim refugee crises; it gives them an excuse to blame the West and Israel for all the world’s ills, including hardships inflicted upon Muslim-majority populations by Arab leaders themselves. It’s far easier to blame the West and, of course, the Jews for crumbling infrastructure and poverty than address the problems head-on. Arab petro-dictators are far more inclined to raid the coffers of their own country’s wealth and maintain a regressive economic model that allows for corruption to flourish unchecked than welcome modernity and all of its potential benefits for the wider population.

Islamic religious apologists are selectively blind to the macabre history of Islam. Academic, historical, and scriptural accounts of the religion’s development all attest to the fact that Islam was indeed founded upon tribal schisms and bloodshed. The primary driver of violence in the Middle East today is Sunni-Shiite sectarian violence, a conflict stemming from the early days of Islam when warring factions quarreled over the rules of succession following the death of Muhammed.

As Leftist apologists are quick to point out, ISIS’s main victims are other Muslims. What they deliberately leave out, however, is the fact that ISIS is a Sunni-Salafist organization that targets non-Sunnis, including Shiites, Yazidis, Kurds, apostates, and anyone else they consider outside the framework of Muhammad’s carefully articulated framework of Islamic piety. Indeed, ISIS’s assaults are highly calculated and vindictive, attacking targets that have sought out revenge against Sunnis in the past, like Iraqi Shiites, or Westerners that have dared to question or criticize Muhammad.

Unlike Islam, Judaism, as a religion, has solved its theological disputes through intensive scholarship and oral arguments. The Talmud is the living testament of Jewish debate and exegesis. Contrary to their Islamic clerical counterparts, Rabbinical authorities have refrained from inciting violence in name of religion and have instead encouraged textual analysis and philosophical inquiry for the greater part of Jewish history and into the modern era.

One of the main prejudiced complaints Hitler and the Nazis leveled against the Jews of Europe was that they were too integrated into society. Hitler sought a wholesale separation between Jews and Aryans based on eugenics-dependent racial lines. While anti-Semitism was still pervasive in Europe before the rise of the Third-Reich, the Jews nonetheless managed to thrive in a variety of fields, including the arts, literature, science, finance, and medicine. The Jews that were Orthodox practiced their faith in peace and privacy, without imposing their religion on wider society.

Today’s Muslim refugees come from relatively unstable, Islamic-centric societies where religion is both a public and private exercise. The wall of separation between personal Islamic faith and public Islamic law is virtually non-existent in Muslim-majority countries. Islam encompasses every aspect of life from marital relations to government administration.

As a result, Muslim refugees may have sympathies and views antithetical to Western values. According the a recent Pew Research Center poll highlighted in The Daily Caller, a significant proportion of  Arab Muslims endorse sharia law as the ideal legal code for society and favor harsh punishments for non-believers that violate the tenets of Islam:

Ian Tuttle of The National Review explains the value-gap between Jews of the WWII era and Muslim refugees today, citing, “A recent Arab Opinion Index poll of 900 Syrian refugees found that one in eight hold a “to some extent”-positive view of the Islamic State (another 4 percent said that they did not know or refused to answer). A non-trivial minority of refugees who support a murderous, metastatic caliphate is a reason for serious concern. No 13 percent of Jews looked favorably upon the Nazi party.”

According to the latest Pew Research Center polls, the majority of anti-Semitic attacks directed against Jews are initiated by members of the Muslim immigrant population. This is unsurprising given the culture of rampant anti-Semitism in the Arab world, particularly in Palestinian territories. “While European views towards Jews have become more negative, the deepest anti-Jewish sentiments exist outside of Europe, especially in predominantly Muslim nations. The percentage of Turks, Egyptians, Jordanians, Lebanese and Pakistanis with favorable opinions of Jews is in the single digits,” documents Pew.

Global Jewry’s numbers are dwindling dramatically, while Muslim populations across the world are skyrocketing. Muslims are one of the fastest growing groups in the world. In the West, Muslim birth rates are far higher than Christians, Jews, and the unaffiliated.

“The Muslim share of Europe’s total population has been increasing steadily,” cites Pew. “Muslims are younger than other Europeans. In 2010, the median age of Muslims throughout Europe was 32, eight years younger than the median for all Europeans (40).” The influx of Muslim refugees flooding the West will exacerbate this demographic shift as the overwhelming majority of migrants are male.

These male migrants import anti-Semitic ideologies and beliefs that may harm existing minority populations, especially Jews. When the Charlie Hebdo Islamic terrorists finished slaughtering French cartoonists they went straight to a kosher super-market to butcher Jews. The anti-Semitism of the Obama administration obscured the fact that the kosher super-market attack was religiously motivated. In a moment of shame that will live on in the historical annals of anti-Jewish bigotry, President Obama called the attacks “random,” as if random Islamic terrorists happened to randomly stumble upon random Jewish folks in randomly kosher super-market to commit mass slaughter.