Indian Israelis Bridge the Divide at Home and in America 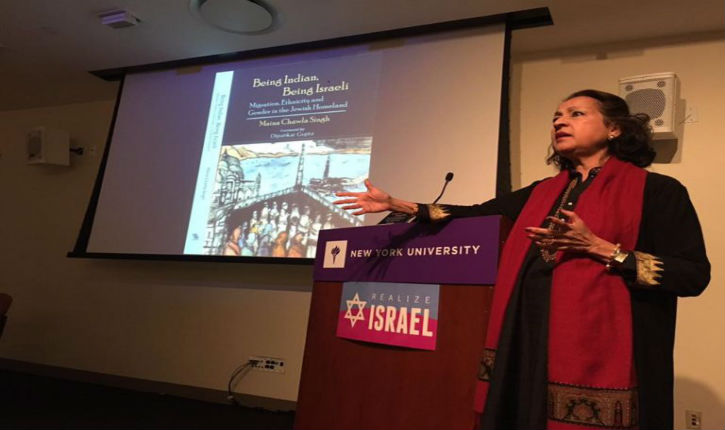 When you think of an Israeli, what image pops into your mind?

Is it a tanned person with dark hair with a bowl of hummus in his hands? Did his family immigrate from Poland or Hungary? For me, as an average American Jew, the Ashkenazi Jew is what I used to see when I pictured Israel. But I was wrong.

Right now, in addition to Sephardim, Ashkenazim, Russians and Ethiopians, there are also more than 80,000 Indian Jews living in Israel, serving in the military, holding leadership positions and running companies.

In 1948, upon the establishment of the Jewish state, 25,000 Jews left India to live in the land of Israel. Yet they still remained tied to their native country.

As the wife on an Indian diplomat, Dr. Singh had the chance to conduct outreach to the Indian-Jewish community, and learn about the history of the Indian community in Israel. Her research has focused on Indian diaspora communities and what happens to a population once they leave their home to go to an adopted homeland, including how this move impacts their identity.

India’s Jewish community is nearly 2,000 years old, and India prides itself on being the only country never to have persecuted Jews. India’s Jews did not leave out of fear, the way many others making aliyah did. Instead, they traveled to Israel in search of housing, opportunity and a return to a “fatherland” to which they had a deep connection. Yet these Jews also remained deeply connected to India, leading to a unique intersectionality of the two cultures.

Dr. Singh noted that duel citizenship can create a sense of identity and belonging, but that India does not allow such a system, forcing those populations who left for Israel to forfeit their Indian citizenship. This did not cause them to lose their connection to India; the celebration of Indian customs and rituals thrives in Indian-Jewish communities in Israel to this very day.

Similarly, at the NYU event, Jewish and Indian students both participated in this fascinating program. As one NYU student said, “To have two very distinct communities come together to learn about our similarities through the lens of Israel was an amazing experience.” A member of NYU Shruti noted, “Professor Singh’s lecture highlighted the importance of film, art, music and dance in helping the Israeli Indian community maintain their Indian origins. As an Indian American, I find myself holding onto my Indian roots through art and music as well.”

Opportunities like the NYU event enable two distinct groups to come together and find common ground that they may not have found otherwise, fostering a sense of compassion and understanding.