Students are sleepwalking into anti-Semitic hysteria 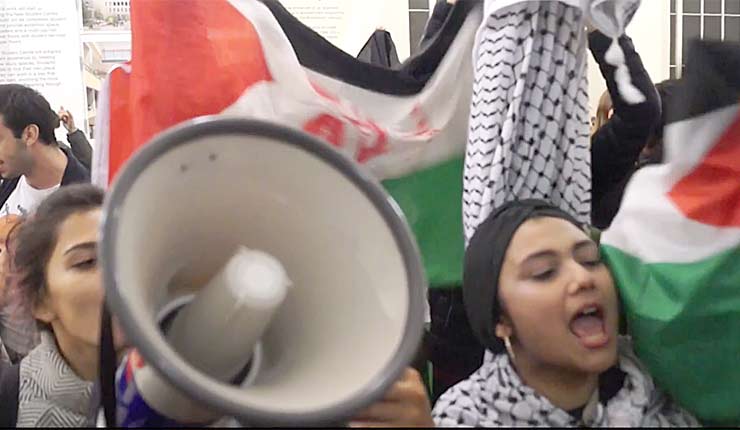 Never again, was the promise. We remember, the pledge. And yet, amid record levels of anti-Semitic attacks recorded nationally by the watchdog CST, anti-Semitism on our campuses has become a major problem. Sadly, my own alma mater SOAS University of London is a main culprit.

This week SOAS Jewish society’s president Avrahum Sanger revealed that anti-Semitism has found its foothold firmly in Bloomsbury, claiming that some students are too afraid to wear the Star of David or speak Hebrew at the country’s foremost languages school.

The union – where I once served as an officer – had already voted to boycott Israel by the time it decided to hold an Israeli Apartheid Week last year. This came after a vigil was arranged on SOAS’s steps where among those mourned was Muhannad Shafeq Halabi, who killed two Israeli men in Jerusalem. Students were mourning a terrorist. Jewish students have been pushing for kosher food to be reinstated at the union snack shop, and for a multi-faith prayer room to be made available once again after it was recently closed.

Despite this, there are two prayer rooms for Muslims only. And these are segregated, one for each gender, in case you had hoped for some radicalism to hail from the university that prides itself as being the most progressive in the UK.

No wonder then that a freedom of information request from last year found only 39 students comfortable enough to declare they were Jewish.

As a SOAS alumnus who remembers the pride I took in my school’s multiethnic, culturally rich and diverse student body, this is depressing.

From SOAS to another campus in Bloomsbury, anti-Semitic aggression came to be openly displayed at the University College London.

Last October dozens of police officers were called to quell a violent anti-Israel protest that left student organisers like Devora Khafi terrified and suffering a panic attack, as Jewish students barricaded themselves in a room.

Police had to eventually escort the small group to safety. But this was not the first time police involvement on campus was needed. That same year police were called to Kings College after a student Israel society was attacked by demonstrators, and one of their officers Esther Endfield reported an assault.

Eyewitnesses described a mob throwing chairs and smashing windows. The meeting had to be stopped and the building evacuated.

Next came Oxford University’s turn, as the co-chair of its student Labour club Alex Chalmers resigned in protest after claiming that its members have “some kind of problem with Jews”. Senior members of Oxford’s Labour club had apparently expressed their solidarity with Hamas and its terrorist methods of killing Israeli civilians. A second Labour club officer Brahma Mohanty soon followed, resigning in disgust.

Not be outdone, York University had to award Jewish student Zachary Confino £1,000 in compensation after he endured two years of repeated anti-Semitic abuse as an undergraduate. The union has issued a written apology after it was accepted that the university had failed to intervene. This was followed by Exeter, where students were photographed wearing T-shirts with racist and anti-Semitic slogans daubed on them at a sports club social event. The phrases included: “The Holocaust was a good time.”

And this week, anonymous anti-Semitic slogans also made an appearance at Goldsmiths University as graffiti appeared on a noticeboard calling on sociology professor David Hirsh, an expert on anti-Semitism, to be expelled for being a “bitter Jew”. If by now you’re worried that this is looking like a national problem, then you are right. Things have not been this bad for a lifetime, and the lead is coming from the top, the National Union of Students (NUS) itself.

Last summer the NUS passed a motion removing the right of Jewish students to vote for their own representative on the union’s Anti-Racism and Anti-Fascism committee.

The NUS also held debates on whether to drop Holocaust Memorial Day commemorations, to which large numbers of attendees reportedly cheered and applauded.

The election of Malia Bouattia as the head of the NUS leaves little room for hope that things will change. In 2011 the now NUS president wrote that Birmingham University was “something of a Zionist outpost”. By 2014 she was arguing in a speech called “Gaza and the Palestinian Revolution” that boycotts and non-violent protests were insufficient. For Bouattia, the only way to free Palestine was to take orders on resistance from what she called “Palestinians on the ground”.

Bouattia was also responsible for the efforts to block an NUS motion condemning ISIS as a terrorist organisation and to show solidarity with the Kurds. The claim was that this would be read as Islamophobic. After much condemnation a reworded motion was later passed.

The NUS did adopt a motion with relative ease to boycott Israel. Curiously, the same logic was not used and this was not deemed anti-Semitic.

Matters came to a head last September as 44 student leaders signed an open letter stating that Jewish students did not feel safe participating in the national student movement.

How did it all come to this? The perfect storm: Islamist theocrats, their regressive left apologists and right wing populists.

Though they may hate each other, they agree to hate on Jews more. I call this Europe’s triple threat, and it is tearing our political culture asunder, poisoning our discourse and leaving a nasty aftertaste to campus activism.

No surer sign of rising fascism have we had in our history than the scapegoating of our Jewish communities. Alarm bells should be sounding, and yet they are not.

This week, we remember the tragedy that was the Holocaust. An atrocity made so easy because Europe was allowed to sleep walk into anti-Semitic hysteria.

No-go zones, she said. Never again, we had promised.