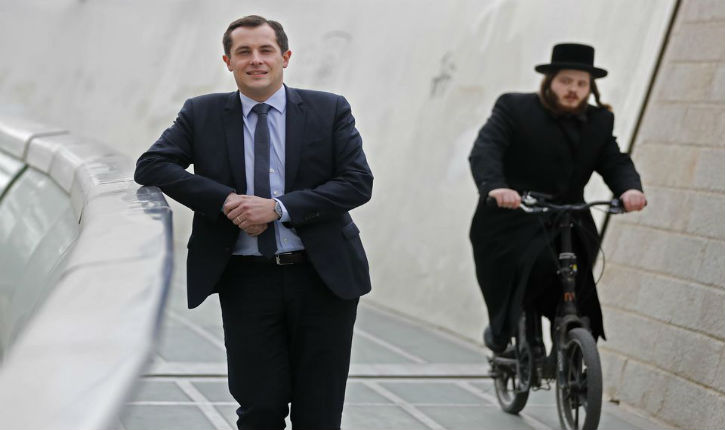 JERUSALEM –  The secretary general of France’s far-right political party visited Israel on Thursday and met with military, government and political officials, though Israel shuns the party.

Israel has no official ties to the National Front because of its far-right ideology and history of anti-Semitism. The party’s leader Marine Le Pen is a leading French presidential candidate in the April and May election.

Emmanuel Nahshon of Israel’s Foreign Ministry says Nicolas Bay was on a private visit and would not meet Israeli officials.

But Bay tweeted photos of his meetings with Israeli Health Ministry’s deputy director general, an Israeli medical commander, a leading member of Israeli Prime Minister Benjamin Netanyahu’s Likud party, the leader of the party’s youth organization, and other civil society leaders. Bay’s photo of meeting with an army colonel and the Health Ministry official later disappeared from Bay’s Twitter.

Israel’s Haaretz daily reported that Bay was visiting to meet French citizens living in Israel and shore up French Jewish support, and to meet Israeli politicians.

His meetings come as members of other far-right parties in Europe have paid visits to Israel and sought to forge ties with the Jewish state.

“The meeting with Mr. Bay was unofficial and took place by coincidence,” said David Shayan, head of the Likud party’s youth group. “Likud Youth has no interest in involvement with the political process and elections in France.” He declined to say what was discussed in the meeting.

The Health Ministry and the Israeli army had no immediate comment.

A senior Israeli official, speaking on condition of anonymity in line with regulations, said the prime minister was not aware of any meetings with the National Front.

Since Marine Le Pen, a leading presidential candidate, took over the leadership in 2011, she has worked to scrub away the anti-Semitic image inherited from the long reign of her father, Jean-Marie Le Pen, a party co-founder convicted of racism and anti-Semitism. She had her father expelled as a party member, though a court ruled he remains honorary president for life.

The National Front had no comment on Bay’s visit to Israel.

Johann Habib, spokesman of the Israeli Francophone Federation, called the visit “shocking” and “a provocation.”

“This party does not share our values of democracy and equality and tolerance,” Habib said. “The party is anti-Semitic.” He questioned why Israel allowed him into the country.

Two weeks ago, Marine Le Pen made her own surprise visit, this one to Trump Tower in New York. She did not meet with anyone in the Trump team, but George Lombardi, a Trump Tower resident and co-founder of Citizens for Trump, said he held a gathering for her with a group of entrepreneurs, industrialists and diplomats.