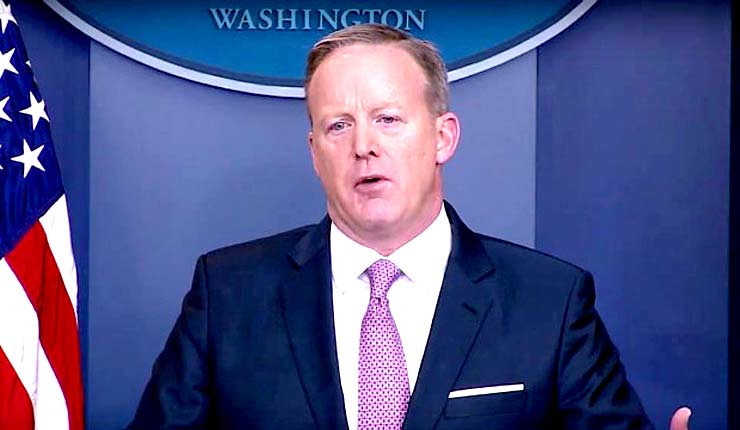 New US President Donald Trump “wants to grow closer with Israel and make sure that it gets the full respect that it deserves in the Middle East,” White House Press Secretary Sean Spicer said on Tuesday.

In response to a question from a reporter about Israel’s approval on Tuesday of 2,500 new housing units in the West Bank, Spicer said, “Israel continues to be a huge ally of the United States…We’re going to have a meeting with [Israeli] Prime Minister [Benjamin] Netanyahu and we will continue to discuss that.”

Pressed further by the reporter on the matter, Spicer replied, “We’ll have a conversation with the prime minister.”

Netanyahu has been invited to Washington, DC to meet with Trump at the White House next month.

Earlier in the press briefing, Spicer declined to comment specifically on the Obama administration’s last-minute move to transfer $221 million to the Palestinian Authority and the PA’s use of US taxpayer dollars to pay monetary rewards to terrorists and their families.

“[Trump] is very concerned about how taxpayer money is spent, whether it’s sent overseas and what we get for it in terms of the relationship or our support for a democracy or aid to another country for their defenses,” Spicer said. “But he’s going to be examining all aspects of the budget…He’s going to make sure that every deal, every dollar that is spent by the government is done in a way that respects the American taxpayer.”

At his first official press briefing on Monday, as reported by The Algemeiner, Spicer was non-committal about the timeline for a potential move of the US Embassy in Israel from Tel Aviv to Jerusalem.

“There’s no decision, we’re at the very early stages of that decision-making process,” he said.

In a pre-election interview with The Algemeiner in early November, senior Trump adviser David Friedman — who has since been picked to serve as the next US ambassador to Israel — said that, as part of any future Israeli-Palestinian peace deal, a Trump administration would not expect the Jewish state to uproot its citizens who now live in the West Bank and east Jerusalem.

“It is inconceivable there could be a mass evacuation on that magnitude, in the unlikely event that there was an otherwise comprehensive peace agreement,” Friedman said. “It makes no sense for Judea and Samaria to be ‘Judenrein [void of Jews],’ any more than it makes sense for Israel to be ‘Arabrein [void of Arabs].’ It’s not fair.”

This marks a departure from the Obama administration, which criticized Netanyahu last year after he said that the main obstacle to peace was the demand of Palestinian leaders for the “ethnic cleansing” of Jews from the West Bank.

Friedman went on: “The critical thing is to recognize that there is not going to be any progress on a Palestinian state until the Palestinians renounce violence and accept Israel as a Jewish state. Until that happens, there is really nothing to talk about in terms of a political process.”